Nalapat Balamani Amma, mother of poet Kamala Das, was an iconic poet herself, who a fought for the rights of women trough her words.

In an era when women were seen as mere commodities to be traded off from their mother’s house to their husband’s, a writer and poet emerged who wrote and spoke of women as human beings with feelings, desires, and suffering. Nalapat Balamani Amma.

She belonged to a generation of poets who rebelled against the patriarchal norms including Durga Bhagwat, Lalithambika Antarjanam, Mahadevi Verma, Amrita Pritam. She is also the mother of prolific Indian poet Kamala Das a.k.a. Kamala Suraiyya.

Today marks the birth anniversary of renowned poet Nalapat Balamani Amma. She is often regarded as the ‘Mathruthwathinte Kavi’ (poetess of motherhood’ or ‘Muttassi’ (grandmother), due to her fondness for children.

Balamani Amma was born on 19th July 1909 in the small town of Punnayurkulam in the state of Kerala. Despite her lack of formal schooling, her maternal uncle and his personal library aided her in becoming a poet.

It was an era when women’s voices were routinely suppressed, and no one considered them of much value; they were mute spectators of violence. While people were eagerly anticipating independence, women were anxiously anticipating liberation. 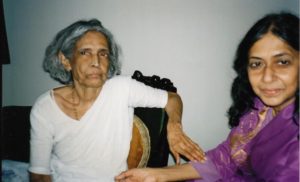 Balamani Amma emerged during that period. She focused on several such issues in Naivedyam, her principal collection for which she received the Saraswati Samman in 1995. She often questioned the position of women in society, and she fought for the rights of women during her times. In Naivedyam, she examines the misery of women and their many positions as beloved, housewife, mother, Durga (the angry goddess), a working woman, a servant maid, and a grandmother.

Her other works include Kudumbini, Dharmamargathil, Sthree Hridayam, Prabhankuram, Bhavanayil, Oonjalinmel and many more. She inspired several women through her works, and to keep her legacy intact, the Kochi International Book Festival Committee created the Balamani Amma Award for writers.

At a time even brave hearted would fail to speak, Balamani Amma feared none and she tackled problems of liberty, fraternity, and equality, as well as many facets of Indian culture, in the majority of her writings.

She writes “As each pair, caused by the savagery of the earth on every atom of life, throbs within me, I sing of the wings that droop down and not of the glory of man’s flight.”

Through her several works, Kamala Das has often drawn inspiration from her mother Balamani Amma and she has always spoken in high regard of her mother. She has translated one of her mother’s poems, ‘The Pen’, which describes a mother’s loneliness.

I remember reading Kamala Das’s poem ‘My Mother at Sixty-Six‘, and it kept me thinking for a while, as Kamala Das conveys her sorrow at the prospect of losing her mother and it’s an emotive poem about a daughter’s emotions toward her mother. She writes –

“Driving from my parents’
home to Cochin last Friday
morning, I saw my mother, beside me,
doze, open mouthed, her face ashen like that
of a corpse and realised with pain
that she was as old as she looked.”

I was teary eyed while reading this poem, written by Kamala Das as an homage to her mother. Throughout the poem, the realisation that your mother is old, and tremendous grief of the possibility of losing a mother is resonated.

Her legacy continues even after several decades

During her lifespan, she won several honors, including the Kerala Sahitya Academy Award, Kendra Sahithya Academy Award. In 1987 she was honoured with the Padma Bhushan award often regarded as third highest civilian award.

Not only to the colonial times, Balamani Amma’s works provides invaluable insight into the times we live in. She was capable of delving deep into the human subconscious and finding solutions to many of the problems that man has pondered throughout history.

Her stories are not only an inspiring for women, but also for young children. Balamani Amma wrote with the intention of breaking the centuries old silence on suppression of women, and smashing the patriarchy. Though in her times, they didn’t term this ‘feminism’, there are many such women who fought for women’s liberation, and Balamani Amma was one of them. A modest white or khadi-clad woman who seldom travelled, yet her internal voyage took her far beyond the stars, galaxies, and gods.

Prathiksha BU has completed her post-graduation in Journalism and Mass Communication and is pursuing Ph.D. Her areas of interest include geopolitics, law, gender studies, and film studies. As an intersectional feminist, she draws read more...