As a cis het woman I was pleasantly surprised to relate to lives of women of diverse sexualities and gender identities as I read their experiences; so mustn't I fight for all women?

As a cis het woman I was pleasantly surprised to relate to lives of women of diverse sexualities and gender identities as I read their experiences; so mustn’t I fight for all women?

The Rainbow flag aka the Pride flag is representative of the various diverse sections and sexualities under the LGBTQIA+ spectrum.

The original flag, designed by Gilbert Baker had eight stripes. Today’s version has six colours, but there are many other variations and versions that are popular.

Learning from books is the best way

When I first read Fierce Femmes and Notorious Liars, I was surprised by how relatable the story of a lesbian was to a cishet person like me. That was the first time I began to realize that their struggles against oppression weren’t alien to even women like me.

Then I read Vivek Tejuja’s So Now You Know: Growing Up Gay in India and found it another relatable read. All the experiences that he talks about like wanting to find that special someone or parents not being empathetic enough, or extended family not taking you seriously because you don’t have the same interests as them is something that’s not specific to only one gender or sexuality.

There has always been a gnawing thought in my mind: As someone who truly believes in equality for all, I’ve not really done enough for using my voice for the LGBTQIA community. And this thought always bothered me.

After reading Can We All Be Feminists?, the urge to be more vocal about intersectional feminism became stronger.

Using my privilege to create awareness

If I wasn’t using my privilege, voice, and position to fight for ALL women, what kind of feminist even was I?

And while I don’t have the lived experience to be able to write on intersectionality (also because I am still myself learning about it), I realized I can use my art to spread awareness about it instead.

A lot of times, I’ve heard people say that movements like Pride Parades or Black Lives Matter are divisive to the mainstream feminist movement. That it distracts from the main fight, and proves to dilute the voices.

Nothing could be farther from the truth. After reading books like Can We All Be Feminists? I am convinced that the burden of being inclusive shouldn’t fall on the marginalised. It should be the responsibility of the majority, privileged, to make space for them, empower them, and use our voices to make theirs stronger (without hogging that time and space for ourselves).

Using art to create this awareness

In the newer variations of the Rainbow flag, black is representative of the #BlackLivesMatter movement. And I’m glad that there are enough solid black lines in this mandala to stand for that too. 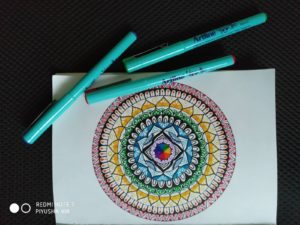 For me, the white spaces in this mandala are a representation of the cohesiveness and inclusivity that we as a society should strive for.

It stands for a dream that one day all communities will exist peacefully and in harmony with each other.

It stands as a rejection of the idea that all these movements undermine mainstream feminism.

It is an endorsement of the sentiment that is the underlying theme of the book Can We All Be Feminists, that if we’re not fighting for the equality of ALL women, what kind of feminists even are we?

It is a hope that someday we won’t need a single month in a year dedicated to celebrate diverse sexualities and gender equality but will do it all year round, each day, every day.