Businessman Harsh Goenka put his foot in when he tweeted on divorces of Bill Gates and Jeff Bezos, indirectly labelling their wives 'gold diggers'.

Businessman Harsh Goenka put his foot in when he tweeted on divorces of Bill Gates and Jeff Bezos, indirectly labelling their wives ‘gold diggers’.

I’ve never understood the fuss over Bill Gates and Melinda Gates divorce in a country where divorce is normalized. But, we cannot say the same for our country, India, where divorce is still taboo in 2021.

What makes it even tougher is when you have sexists all over the place and in your face, spreading their tentacles like monster green creeper plants across all sections of our society. 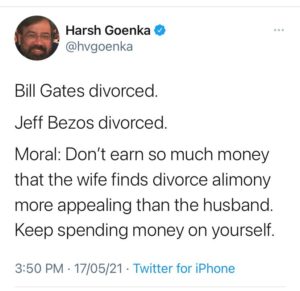 Unfortunately, this tweet by Goenka is no joke. The man’s preaching to his fellow countrymen to be wise, not to trust their wives, and spend their money on themselves.

Goenka’s moral of the story is a fucking lie in a country where we put our goddesses on a shiny pedestal, and we literally and metaphorically rape our women daily.

Perhaps Mr Goenka should use his influence for better things?

If Goenka’s message is aimed at all poor and naive countrymen, then perhaps he could ask them to develop some aatmanirbharta and stop asking for dowry.

Maybe he could tell them to stop treating their daughters like a commodity given away in marriage as free labour.

Perhaps he could tell them not to treat their women worse than their gaumata.

Maybe he could tell them not to be a rich arse like him, who can buy everything in the world except grace, fairness, and empathy.

Who is the real gold digger if thats the criterion?

The divorce rate in India is 1%, and it gives the illusion of successful marriages here. The credit for these figures goes entirely to our rigid patriarchal system, which has thwarted the freedom and dreams of millions of women by relegating them to their kitchen and caregiving duties for life for their spouse and family. If the woman brings in dowry and a working woman with no financial charge, that’s hitting the jackpot for our men.

“So, the question is, who are the real gold-diggers here, Mr. Goenka?”

Don’t play innocent and give a long rope to your gender for their misgivings. There is persistent discrimination against women, denying them equal land and property rights as they own less than 20% of the world’s land.

So, what’s HER story?

Both Melinda Gates and Mackenzie Scott are as ingenious as their ex-spouses, if not more. 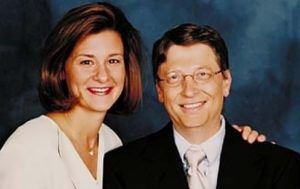 Melinda Gates is an American businesswoman and philanthropist. As a child, she was brilliant in academics and put in the advanced math class, and her first job was tutoring children in mathematics and computer programming. She joined Microsoft in their product development team in 1987.

Melinda Gates was responsible for the development of various multimedia products such as Cinemania, Encarta, Publisher, Microsoft Bob, Money, Works (Macintosh), and Word. She was later appointed as the General Manager of Information Products in Microsoft but quit the company to focus on family and philanthropic work. 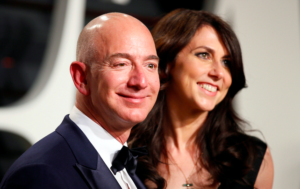 Let’s also not forget that Mackenzie Scott is the co-founder of Amazon. She built the company from scratch, literally the couple’s garage, including putting her finances into it. She contributed to the company’s name, business plan, accounts, and shipping early orders.

Scott was always a writer at heart, with her first book at the age of six, The Book Worm, a 142-page book destroyed in a flood. Her first job was at D. E. Shaw in New York, as a research associate where she worked to “pay the bills while working on her novels.” Jeff Bezos, the then vice-president at D. E. Shaw, took her interview, which also happened to be their first meeting. When Amazon began to succeed, Scott took a less active role in the company to pursue her writing career and concentrate on family and philanthropy.

She wrote her debut novel in 2005, The Testing of Luther Albright, which won her the American Book Award (2006.) It took her 10 years to write her debut alongside building Amazon with her husband, birthing three children, adopting one child, and raising four children. Her writing mentor, Toni Morrison, had this to say about her debut book – “a rarity: a sophisticated novel that breaks and swells the heart.” Scott is currently married to Dan Jewett, a high school chemistry teacher.

It’s extremely callous and in poor taste for Harsh Goenka to dismiss the achievements of two highly successful and powerful women in their own right and insinuate that they are gold diggers.

But that’s not the only bone of contention here. A woman doesn’t need to be a Melinda Gates or Mackenzie Scott for her to be respected, heard, and given the empathy she deserves.

It’s also an eye-brow-raising concern that while Harsh Goenka dismisses women as gold diggers, he doesn’t prescribe divorce as the solution, thus further propagating the stigma around divorce in our country.

Goenka’s marriage advice to men reminds me of a friend who’s currently in a live-in relationship with a married man. The man claims he’s been forcibly married to a woman who’s his parent’s choice. Both his parents are no more, and he’s left his wife alone and moved cities on the excuse of work. He met my spinster friend on Tinder and started living with her. He’s convinced his girlfriend that divorce is a long-drawn procedure that might take several years, and he’s trying to find legal ways to escape alimony since he claims he doesn’t have much money with him. So, he doesn’t want to hold back his girlfriend, who’s madly in love with him, and she’s free to move out and find another partner whenever she feels like it. Isn’t it a classic case of having your cake and eating it too?

Man, why you so complicated, huh? And then we women are accused of being complicated beings?

Coming back to Bill Gates, Jeff Bezos, or whosoever’s divorce, how can anyone be sure of what transpired in these marriages and dole out a highly judgemental ‘moral of the story’ blanket statement?

While I don’t want to speculate on matters I am not sure about yet, I’ll conclude with what journalist Rohini Singh had to say in response to Harsh Goenka’s tweet.

I want to add, isn’t it ironic for a billionaire like Harsh Goenka to blacklist the female gender as untrustworthy, gold-diggers?

If you’ve not cared to listen to both sides of the story, man, please don’t preach!

Harsh Goenka has since deleted the tweet, hence we have included a screenshot.