The Good Girls: A Step By Step Investigative Look At The 2014 Badaun Rape & Murder Case

In The Good Girls: An Ordinary Killing, author Sonia Faleiro takes a deep dive into the facts of the 2014 Badaun rape and murder case, a well written piece of investigative journalism.

In The Good Girls: An Ordinary Killing, author Sonia Faleiro takes a deep dive into the facts of the 2014 Badaun rape and murder case, a well written piece of investigative journalism.

In May 2014, at a remote hamlet named Katra in the Badaun district of western Uttar Pradesh, two young girls were found hanging from a mango tree in a neighbour’s orchard.

This incident is infamous in recent history as the 2014 Badaun rape.

The two girls, given pseudonyms of Padma and Lalli in this book to cater to government rules of not naming victims of sexual assaults, were 16 and 14 years old. The elder girl had been taken out of school after the 8th  grade and her family was looking out for a suitable match for her when they incident occurred. After the bodies were found hanging, the family opted for an unexpected method of seeking relief: they refused to allow the bodies to be brought down until justice was served.

With the information I’ve given you so far, assuming you have no detailed memory of the actual case, you would have reached your own conclusions about the girls’ deaths. I did too when the book started. And I was proven wrong, again and again.

A timeline of what happened after the 2014 Badaun incident

This book doesn’t offer you an insight into sexual assaults against women or caste rivalries or political manipulations or police mishandling of cases, or the medical bungling in the hinterland, though all of these are included to varying degrees. What it gives you is a detailed timeline of what happened on May 27th 2014 up to a few months later.

You would assume that two girls disappearing in the middle of the night would unify everyone in the quest to locate them. But no, there are still so many things to consider first: the family name, the girls’ reputation, the fear of police, the caste of the possible kidnappers… You just keep taking in fact after fact, hoping to make sense of the situation. But you won’t be able to. Because whatever happened is utterly, shamefully senseless and your urban mind simply won’t be able to digest the ridiculous thinking that passes in the name of honour in this country.

A well researched, traumatic read, but worth it

I couldn’t read the book at a stretch though I found it difficult to keep aside. I kept needing breathers to calm myself down because some of the scenes were simply too aggravating. Even something that I take for granted in my life – a mobile phone – took on a very different meaning when viewed from the eyes of these villagers.

The author has done a lot of research and it shows. I don’t know how far this book will work for a non-Indian reader. The casteist mentality is something only we will understand (to whatever extent it can be justifiably understood.) Though the author has a tendency to include too much information at times, I felt it was necessary so that even those without an understanding of how rural India functions will be able to get the situation as it unfolded. She doesn’t hesitate in calling a spade a spade. I admire her for going to the heartland of the case and interviewing all the people involved, in spite of knowing their mentality about women. That was brave! There are some grammatical errors in the book but I kept those aside willingly; this is one instance where the content is more important than the language.

Don’t read this to know what girls go through in this country; you already know that. Read it to understand the psyche of people in rural India, especially of men when it comes to the women in their lives. You must have heard the term ‘comedy of errors’ many times. This book will give you an example of a ‘tragedy of errors’.

As regards Padma and Lalli, they will forever be enshrined as ‘the good girls’; you will know the significance of my statement only if you read the book.

If you would like to pick up a copy of The Good Girls: An Ordinary Killing by Sonia Faleiro, use our affiliate links at Amazon India, and at Amazon US.

Founder-admin of Readers Forever!, a Facebook group for all lovers of the written word. MBA by qualification, bibliophile by passion. read more... 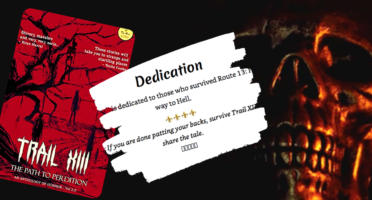 Not For The Faint Hearted, New Hive Horror Anthology Trail XIII Will Give You The Heebie-Jeebies!