The formidable system of dowry, the so-called ‘tradition’ has been hailed as a social evil through almost every medium possible. However, the ground reality is different from what we see in movies or read in books. Despite the constant criticism it receives, the dowry system is still looked at as a ‘tradition’ and is rampant in several places across the country.

Xeeshan uploaded a video on Instagram where he didn’t just show his collection but shed light on the practice of dowry and its effect on women.

The video is a hard-hitting reflection of the reality

In the video, an older couple is seen unloading plenty of things on a bullock cart. These are the things that one would ‘expect’ as part of the dowry. In the next scene, we see a young bride sitting and crying by the heavy bullock cart.

Soon, the groom enters and stands by the cart. He is someone who seems much older than the bride, highlighting yet another problematic practice of marrying younger women to much older men.

As the video ends, we see the young bride sobbing and trying to pull the heavy dowry-laden bullock cart as her husband sits atop it.

Xeeshan captioned the video while talking about dowry and its implications. He wrote, ‘Shedding light on the epochal and alarming issue of families fretting over saving money for their daughters’ dowry (Jahez) instead of their education that is far more important. It’s time to put a stop to this overburdening tradition!’ 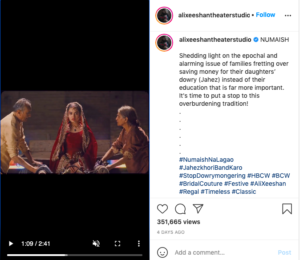 Why this video was important

The dowry system is still rampant in major parts of India, where no one bats an eye or tries to question the evil system. According to a report in India Today, 21 dowry deaths are reported in India every day.

The National Crime Records Bureau (NCRB) reported than in 2015 as many as 7634 women died in India due to dowry harassment and abuse. According to the same report, ‘after registration of dowry deaths, police have chargesheeted around 93.7 percent of the accused, of which only 34.7 percent have been convicted. The remaining cases are still pending in various courts.’

Despite these staggering numbers, the forbidden and illegal ‘tradition’ is still practised widely in society. Why is taking dowry still considered a matter of pride?

On the other hand, people also expected to be rewarded and praised for doing the humane thing and not taking dowry! They expect the girl’s family to constantly appreciate them for not asking for dowry.

When will a daughter’s happiness, her choice and decision be taken into consideration? The vital message sent through this video leaves us with questions like these to introspect and ponder upon.

Picture credits: Still from the video uploaded on Instagram

What I Told You These 6 ‘Indian’ Traditions Aren’t Indian At All?