Who Is Parul Khakkar, Trolled For Her Viral Poem Shav Vahini Ganga On The COVID Deaths?

Parul Khakkar’s poem Shav Vahini Ganga was just a medium to express the pain in her own mind over the current situation, but trolls have given it another form.

The presence and expression of women on social media has always been a big problem for Indian society, which is basically a proponent of patriarchal social behaviour.

In recent years, a group of patriarchal social groups have resorted to trolling with vulgar comments on the free expression of women on social media in such a way, that many women have had to delete their social media accounts or even leave social media.

Two days ago, after so much sharing and trolling of Parul Khakkar’s poem on social media, she had to change her Facebook ID and shut down her Instagram handle.

Who is Parul Khakkar and what is her poem Shav Vahini Ganga?

It is said that the words that come out of the depths of hurt, as well as from a truly happy mind have a lot of power. 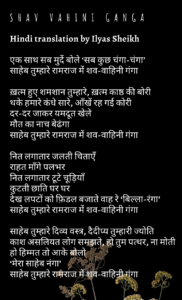 Parul Khakkar, an ordinary homemaker from a simple family in Gujarat writes poems in Gujarati language along with managing household chores, especially devotional poems of Radha-Krishna. Recently, when the bodies of people dying of COVID were found floating in the Ganga, it pained her so much that she wrote her now viral 14-line poem titled ‘Shav Vahini Ganga’ and shared it on her social media account.

Over one lakh people have shared this poem on their social media accounts. Now the poem is being translated into Assamese, Hindi, Tamil, Malayalam, Bhojpuri, English, Bengali and other languages. 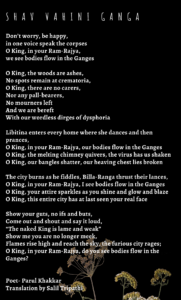 It will not be surprising if it is translated into foreign languages soon.

Abuse is not a new thing for women, who have been facing it for ever in their domestic life, in the public space, and at work. When women resist it, like in the recent Me-Too movement, people are startled that women are speaking up. But women are no longer passive acceptors of violence, and often express it – like in this case, the poem against the apathetic and negligent way the pandemic has been handled.

Parul Khakkar’s words will hopefully create more awareness of the issues in how this pandemic has been handled, and need to shared even more widely.

‘Dabaang’ Women From Indian Mythology Who Inspire Us Even Today!