Salma's book Women, Dreaming translated by Meena Kandasamy is about women trying to break free, challenging their fate, and helping each other to put up a fight against patriarchy.

Salma’s book Women, Dreaming translated by Meena Kandasamy is about women trying to break free, challenging their fate, and helping each other to put up a fight against patriarchy.

Acclaimed Tamil writer, poet and activist Salma’s poetry and writings have always reflected her open defiance of claustrophobic conservatism and religious dogmas prevalent in the rural Tamil Muslim setup. Her second book – Women, Dreaming – is translated into English by writer-activist and poet Meena Kandasamy, making it accessible to English readers.

Women, Dreaming takes us into the inner realms of Muslim women who belong to a small village in Tamil Nadu. It is in essence a mirror to women’s aspirations and their plight across sections of society and religions in varying degrees. Because isn’t patriarchy and conservatism, isn’t it something which has been prevalent and is still widely present?

The translation by Meena Kandasamy reads effortless, and beautifully preserves the flavours of Salma’s Tamil narrative, and is no different. While the focus is on a particular social set-up and religion, it belongs to each one of us as women as we challenge everyday patriarchal norms. And in all of this, we seek strength from our sisterhood bonds.

It’s everywhere – this fear of dreams getting shattered

Recently, during the Christmas holidays, I was interacting with a group of underprivileged girls, around 15-16 years of age on an average. We were sharing in a very casual discussion, what we wished for in this festive season.

A girl shared her thoughts. “In my village, girls are forced to get married as soon as they turn 14 or a maximum of 15,” she said, in an anguished voice. “I just returned from my village attending one such marriage. I tried hard to convince my relatives. Wish Santa could help me with that.”

I could feel helplessness she felt, at the ‘pre-determined’ chaining of her life she could already sense coming, and the hope that something could change that. When I asked her how was at her home she said, “We are three sisters, and I trust my father but even he couldn’t help me in stopping the marriage of my cousin. He has promised us for now that he will not force us, but who knows what our fate would be. That’s why I want to do everything I can do well in my class 12th boards. Many of my friends have been sent to the village, and I know will never come back.”

But is dreaming and aspiring such a big ask?

Salma’s book takes us into the worlds of three generations of women in the rural Muslim families of Tamil Nadu. Their lives are intertwined as mothers, aunts, grandmothers, daughters and friends.

Mehar, Parveen, Sajida and Subaida’s lives revolve around Hasan as a husband, brother, father and a son. Hasan doesn’t leave any stone unturned to make the lives of these women miserable. Salma’s women weave dreams which are simple and seek a dignified life free from the asphyxiation of expectations and norms. That isn’t a major ask. Or is it?

So, what gives Hasan or men like him so much power to control women?

Religion has always been an opiate for masses. Various conservative and regressive fundamentalist frameworks have been put into place and been used by those in the position of privilege. And women, unfortunately, have been at the receiving end.

Religion has been used as a tool to justify the patriarchal mindset and force it on women. Burqa, purdah, ghoonghat, no cut sleeves, no jeans, no short skirts – aren’t these different ways to curb women’s voice under the pretense of religion?

Hasan justifies his sense of entitlement to control women under the name of religion. He is on a self-proclaimed mission to ‘set women on the right path’ and do every bit to seek revenge if they don’t adhere to what he says. While Salma’s women ask for some space, all they get is strangulation of their freedom – speech, expression and aspirations.

Which makes me question – why do we endorse religions? Why can’t there be just one religion to which all of us belong – that of being humane and treating everyone as equal?

Salma’s women show us the light in their way 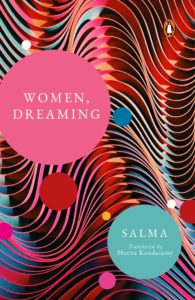 Salma’s women find solace in supporting each other and that gives them the courage to challenge. They question the status quo and reject listening to society’s expectations of them. They understand each other amidst differences in opinion, their challenges and aspirations.

The book spanning 240 pages culminates with Sajida (the daughter) putting a bold stop to the distractions which can deviate her from what she wants, and the controlling that would never end… to send out a strong message that she will do what she feels is right. How she does this, is for the reader to find out.

Women, Dreaming is about women aspiring, trying to break free, challenging their fate, carving a path for themselves, and helping each other to put a fight against patriarchy. It will resonate, fill you with courage and inspire. Read it!

Want a copy of Women, Dreaming?

If you would like to pick up a copy of Women, Dreaming written by Salma and translated by Meena Kandasamy, use our affiliate links at Amazon India, and at Amazon US.