As Indian women, we don’t have an option to sit back and not be a part of Politics – She Leads fills the gap to nurture women for this male bastion.

Recently, the Indian School of Democracy, Stree Shakti, CHEVENING, Shakti, and NETRI came together to train and support aspiring women leaders from across the country for their political journey. The 7-day selection-based program called She Leads brought 50 women leaders from various walks of life to prepare them for the next steps and strengthen women’s political leadership.

As a proud She Leader, here I write about the experience of being a part of the program and why a movement like it is the need of the hour to nurture and raise more women for politics-

Just the last year, before the pandemic struck, we were at a birthday party of one of my daughter’s close friend. The birthday girl who had just turned 10, was asked by one of her uncles what she aspired to become when she grew up. The girl after a pause said, “I want to become prime minister of the country and lead like Mrs Indira Gandhi.”

Everyone was taken aback for a second. Well, a few applauded her but a larger percentage ridiculed the idea, saying that “there were better options to choose from, politics wasn’t something which was meant especially for girls and that too from the middle-class families.”

“You’re a woman; why do you want to join politics?”

Well, the reason I shared the above incident was to set the context for the She Leads program, that I had the privilege to attend recently. Sharing about which with my relatives and friends, I was questioned in shock and surprise – “Oh, why do you intend to join politics, it is very difficult for women, and that too for a mother to two children?”

For me, the motivation has been to see the scale of impact. Often while working in the social sector, I have felt frustrated seeing that so many of us have been working for years, and yes, things have changed, but still not in proportion to the hard work being put. For a moment, think about the impact that can happen with inclusive policies and fair implementation.

But let’s go back to the pattern I am trying to highlight here – about the notion that we want to see a change in the country without being a part of it.

What percentage of us nurture the aspiration to become a part of the country’s politics for the women of our families, for our daughters, for ourselves? I know your answer. You have your reasons. Because isn’t politics dirty? While activism is fine, politics is a different ball game altogether, right? Because what percentage of politicians exist after all whom we hold in the highest regard for their focus on reforms and abilities sans furthering their agendas? A woman in politics has got to choose between her dignity and power and so on…

We are living in some strange time vis-à-vis country’s political atmosphere. Just think about the recent regressive remark of one of the politicians linking a woman’s ripped jeans with her degree of being ‘sanskaari’. Disgusting, isn’t it? Imagine the repercussions of such putrid mindless remarks on the already heavily patriarchal mindsets of people. And that is just one of the milder cases in the point. Even today, in the most secure of localities we are scared to venture out alone at night lest someone…, even today despite being educated and earning, we suffer in silence due to physical and emotional abuse. And let’s not even talk about the invisible yet sure gender discrimination which runs deep in society and at our workplaces across caste and economic status.

Why does it all happen? Because decisions concerning us are being made for us without us being present in the room. These decisions are made without taking into consideration our lived experiences. So, in such a biased and imbalanced state, how can we even expect any changes even in 2047, when we would have completed 100 years of our independence?

72 years of democracy – Women still nowhere near to the decision making?

So here are some facts for you – We constitute 49% of the Indian population, yet we only have 14% representation at the state and the national level politics. Even when there is a reservation for women at the panchayat level, the women’s reservation bill has been awaiting its turn to be passed for around 25 years now. It is interesting then to question that with such an imbalance in the state and national level politics, how can one expect policies to be gender-just policies and fair implementation.

There is an IMMINENT need to change our default answers to the above questions and consider being part of the politics in some manner or other – either actively participating or supporting women who are ready to take the plunge. And that’s where a program like She Leads fills the gap to raise and nurture women to break this male bastion.

She Leads – An enlightening and empowering experience

Structured into two parts, the thoughtfully curated and immersive She Leads program provided us with a comprehensive overview of the country’s political landscape touching on the history as well as the current times. It brought forward how the pathways and participation of women has been in politics and activism over the years. 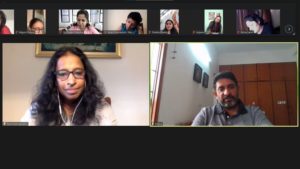 While setting and understanding the context, identities and the way mental models work, we delved in-depth on perceptions, biases and how they influence decisions in politics. The entire cohort was divided into smaller groups called ‘Panchayats’, which seamlessly braided the close interworking and coming together of the Panchayat members along with the bigger discussion forum. 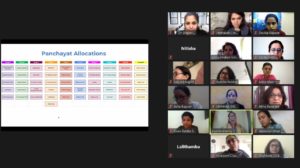 The guest speakers – both veteran and new-age politicians (men as well as women) shared their journeys, struggles, learnings as well as various paths to enter politics beyond the traditional channels. The program also made us aware of the nuances of political fundraising, the importance of the right political communication, the science and principles used by parties during campaigning as well as the strategies which are used during campaigning.

That the entry into politics could only be through traditional ways like corruption, social exploitation, religion, caste, creed etc.

No there are many other potential ways including activism as well as innovatively solving grassroots problems. It is important to choose your mission, work in the area which resonates and, in this way, build social capital and become politically viable. Having a public mission is important.

I need to necessarily do public speaking and get into a public-facing role because that’s what being in politics implies.

Politics is a team sport. There is an entire gamut of people working behind the scenes and one can take the role of research, fund manager, on the ground mobilisation etc. So, you can choose.

That running election means you need to have lots of money.

Yes, running elections does need an investment of money to take care of various cost heads. But most important is the people connect. One can also use technology for outreach and use crowdsourcing to raise money.

That if I am keen to explore politics, I need to stand for some elections only.

No. One can start with as small as running a campaign for something they want to bring change for. That helps one understand how political communication works, how people come together for the cause and also how money is raised and managed.

That I have time, I can decide and take a plunge sometime near the election time.

No. You would be surprised to know how extensively data and behavioural science are being used today to understand the demographics of the constituency and the voters. So, if one is serious about contesting, they need to keep working hard for at it like 3-4years before the time they are planning to contest in the constituency.

Beyond a program – She Leads is a movement

She Leads is an important chapter in the history of Indian Politics which shall go a long way in the political upbringing of women leaders. A nurturing space where women shall support and raise each other as each one of us takes a call on how we want to be part of this ecosystem. But we must!

Seven decades have gone and seven more will go and our representation at the national and state-level politics will still hover as one of the lowest. We need more of us to come forward and do politics in whichever way we can.

I leave you here with these questions. Please take a moment and reflect.

We don’t have a choice and we have lost a lot of time. And most importantly, we owe answers to the above questions to our daughters, isn’t it? So, think, come forward and be a part of the movement which is She Leads!

Who Is Arya Rajendran; The Youngest Mayor Elected In The History Of India?