Almost at the threshold of a new year, we must keep an eye out for these exciting Hindi films about strong women that are set to be released in 2021.

Almost at the threshold of a new year, we must keep an eye out for these exciting Hindi films about strong women that are set to be released in 2021.

2020 has been mentally and physically draining for most of us, leaving us in a slightly apprehensive state about what 2021 holds. Although no one knows or can say yet, despite the vaccines coming in, 2021 might certainly be interesting for its women centric movies.

From various movies which have been postponed, to many originally set releases, 2021 is a year to watch out for.

Shabaash Mithu is an upcoming biopic based on the life and struggles of Indian Women’s Cricket Team captain Mithali Raj. The biopic stars actress Taapsee Pannu as Mithali. It is set to be released on 5th February, 2021.

“I have always been asked who’s your favourite male cricketer but you should ask them who their favourite female cricketer is.” The statement that made every cricket lover pause n introspect that do they love the game or the gender playing it.@M_Raj03 you are a ‘Game Changer’ pic.twitter.com/2VlxYpXmSM

Rashmi Rocket stars actress Taapsee Pannu who plays the role of an athlete. Taapsee’s character in the film hails from Kutch, Gujarat.

Saina is an upcoming biopic based on the life of ace Badminton player Saina Nehwal. The role of  Saina is played by actress Parineeti Chopra.

This Bollywood movie stars Vidya Balan as a forest officer and focuses on man-animal conflict. It revolves around many real-life incidents too. 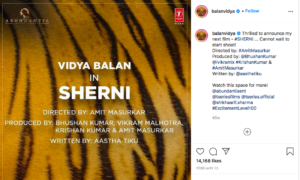 Which one are you looking forward to?