Going Underground Has Helped Us To Be Human; More Than Just ‘Mere Women’

Bina Shah's SFF book Before She Sleeps is a feminist dystopia that draws you in before you realise it. Here's an excerpt.

Bina Shah’s SFF book Before She Sleeps is a feminist dystopia that draws you in before you realise it. Here’s an excerpt.

The Charbagh is my favourite part of the Panah. It’s best at night, when the others are out with their Clients, and the garden goes into nighttime illumination mode. I like to sit on a bench at the far side of the garden with a cup of tea warming my hands.

Fairuza’s a brilliant biochemist. She’s used all her skills to nurture this garden, divided into four quarters, lined by waterways, a small fountain bubbling in its centre. Its murmurations delight us, the quiet whispering of the grasses and plants, the bushes and pygmy trees releasing natural, not synthesized, oxygen. Panels on the ceilings absorb and process it into soft artificial sunlight that lights up the garden year-round. If there’s a god, may he bless Fairuza’s Persian ancestors for coming up with the idea of a garden meant to recreate paradise on earth. It gives us some measure of beauty in our underground colony.

When I was in school, I learned about ants, the workers, sexless drones marching in and out serving a glossy and beautiful queen. Here, Fairuza and I are the queens but we toil for a purpose totally at odds with the way nature works.

Fairuza found the old map in the Geoscience archives and together we discovered this bunker. We had a small window of opportunity to come here, before they widened the restrictions on international movement to include domestic territories as well. We both chose the name Panah, a Persian word that means ‘sanctuary’. Our refuge is made of reinforced concrete and radioactive-proof metals. It keeps us hidden from the men and their scanners above ground. And with luck we’ll be able to go on living here for generations to come.

Gifted as she was, Fairuza could do nothing about the Virus, which morphed from a rare strain of HPV into a fast-spreading cervical cancer epidemic. Men could be carriers, but it was women who were felled, quickly and inclusively. Most died within four to six months of catching it. This is the reason the Perpetuation Bureau stresses fidelity within marriage; a woman’s protected from the Virus when sexually restricted to her legal spouses, who are always tested before a marriage is allowed to take place in Green City.

While the Officials tried to put a stop to the men roaming the city in packs, assaulting and gang-raping any woman they could find, in those chaotic days of Restoration and the new rule, we worked day and night to refurbish our rooms here. We faked our own deaths, gave up all our belongings, cut off ties with our families. We even burned our clothes to destroy any remnants of our DNA that could be used against us. A hard thing to do in your mid-twenties, but we had to.

I was a communication specialist for the government of Green City; I was good with words. So naturally I wrote the first message to the handpicked Officials we invited to be our first Clients:

‘We represent a commodity no longer available in Green City. It’s not just economics; it’s also science, of a sort: the alchemy that takes place between a man and woman, far more compelling than any drug for its powers to soothe, heal, rejuvenate a spirit broken by the stresses and strains of the day.’

At first we went out on assignations ourselves only with the most high-powered Officials: Agency high-ups, Perpetuation Bureau managers, generals in the army. We chose our Clients carefully: men placed highly enough to protect us and keep our activities hidden from the Agency or the Bureau.

In the early days, we looked for how outwardly loyal the would-be Client was to Green City. If a man ranked high enough in the hierarchy of Agents, Officials and Leaders, yet engaged in behaviour that contravened Green City’s strict codes – keeping a woman all to himself, for his own pleasure, instead of sacrificing his desires for the greater good of the society and its reconstruction – his involvement with the Panah would be classed as rebellion. Only the ones who expressed doubts in the new order, who wrote of missing the old days, suited our needs and passed our test.

Soon we had enough business to consider expanding the Panah, with caution. We couldn’t take just any woman to join us. She had to be double- and triple-recommended by our own contacts. Any assets she could bring to the Panah were a bonus – liquefied property, good contacts, and, above all, an unswerving commitment to our secrecy. The vetting methods were rigid because one weak link would bring us all down. The Perpetuation Bureau would easily sacrifice a few errant women to teach the rest a lesson. Green City would use our deaths to illustrate the futility of revolt. 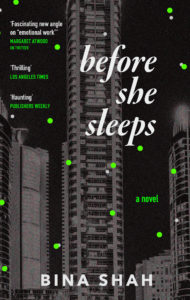 Fairuza died of the Virus five years after we came to the Panah, leaving me alone to run it. The Virus lay dormant in her system, choosing to emerge when there was no way we could get help, even to soothe the pain at the end of her days. It was a terrible death she suffered, and it left me reeling. That’s why I went looking for Lin. Any girl could have carried on here, but I want someone of my own blood to close my eyes after I’m gone.

Sometimes I wonder if the Perpetuation Bureau actually knows of our existence and allows us to continue. What if they’re keeping us tight in a web that they can destroy at any time? I like to torture myself with the idea when I’m in a dark mood. They come often these days. Lin does her best to snap me out of them, but she’s still a child.

Sometimes it’s more comforting to think of destruction than survival. I don’t know why. But the Panah has been in existence for the last thirty years, so perhaps our allies have never betrayed us and maybe they never will. The Panah will exist as long as there’s a need for it, as long as men need women – which means forever. It may be a life in the shadows, but at least no Bureau tells us whom to marry, whom to open our legs for. Nobody can experiment on our ovaries and wombs, pump us full of fertility drugs, monitor our menstrual cycles and ovulation patterns. Our bodies are not incubators that will ‘boost the numbers of women up to appropriate levels’.

Above ground, we are only women, but here in the Panah, we’re humans again.

Published with permission from the publishers Macmillan.

If you would like to pick up a copy of Before She Sleeps by Bina Shah, use our affiliate links at Amazon India, and at Amazon US.