Dolly Kitty Aur vo Chamakte Sitare raises a compelling question: if we can talk about the sexual desires of men openly, then why can’t we do the same for women too?

Dolly Kitty Aur vo Chamakte Sitare raises a compelling question: if we can talk about the sexual desires of men openly, then why can’t we do the same for women too?

There is a glut of content on OTT platforms these days, offering their audience a whole new door to enter the world of entertainment during the pandemic.

Among these, the  Konkona Sen Sharma and Bhumi Pednekar starrer Dolly Kitty Aur Vo Chamakte Sitare is all set to release on Netflix on September 18. The trailer of the film was released today and we’re excited!

The film is directed by Alankrita Srivastava, who is also the director of Lipstick Under My Burka.

A story of pressures that every woman faces

Dolly Kitty Aur Chamakte Sitare is a story of sisters, two cousins who face some complex problems in their simple life as they want to live their lives on their own terms. But as usual, society has objections. Because how can a woman live her life on her own terms? She has to follow the principles of society, right?

A woman in our society needs to get married, have kids, take care of a house…  and with all these expectations how can she even dare to think about her dreams and her own sexual desires, right? 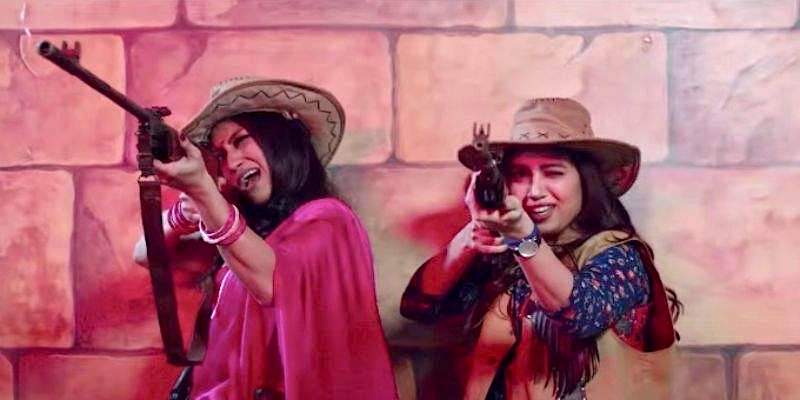 The story of Dolly and Kitty resembles that of millions of Indian women who kill their own desires because society just cannot deal with a woman who wants to live her own life. The women stand up to the shallow norms of society and ask – why should boys have all the fun?

Dolly (Konkona Sen Sharma) is a married middle-class working woman and a mother, whose husband doesn’t care about her sexual needs. He himself has no issues having casual sexual relations with anyone but has objections when his wife goes to someone else for fulfilling her sexual desires.

Basically, for her husband, she is just a caretaker for the home and a way to vent out his frustration. But there’s a  twist in Dolly’s life in the form of a  delivery boy played by Amol Parashar, in whose company Dolly learns new things about the world and even herself.

Kajal (Bhumi Pednekar) comes to Delhi from a small town in connection with her job and comes to meet her sister Dolly. Kajal’s job is that of a cyber lover who talks to boys on the phone, posing as ‘Kitty’ for a dating app. This is where she meets a boy (Vikrant Messi) and the two fall in love with each other.

The trailer promises a movie with an interesting premise. The film has also previously been screened at the Busan Film Festival and the Glasgow Film Festival.

Breaking the silence around women’s sexuality

In our country, the issue of sexuality is often talked about behind closed doors.  And that too when it comes to a woman’s sexuality, then everything goes out of the window. What women’s sexuality? Because only men can have sexual desires, right?

It is this silence around women’s sexuality and the shaming of it that makes women feel ashamed of themselves when they feel desire, for asking for things that they need from their partners.

Dolly Kitty Aur Vo Chamakte Sitare seems like another brilliant ‘lady-oriented film’ that was necessary to have been made. Here’s looking forward to its release on the 18th of September.

It is disturbing to watch Dolly Kitty aur woh Chamakte Sitare. In yet another assertion of female voices, director Alankrita Srivastava aptly captures the poignant moments of self-discovery in the lives of two women.

The protagonists are Dolly, and Kitty or Kajal. One, a young, naïve uninitiated woman and the other, an older woman who has learnt to live a life of shallow pretensions and hypocrisies. They share a bond, deeper and stronger than the familial ties that bind them.

What Do Films & Series Of 2020 Say About The Mixed Realities Of Indian Women’s Lives?

While TV, cinema and OTT content are often deemed to be ‘far-fetched’ or ‘glazed’ with cinematic fabrication, are the portrayals also a reflection of our own reality?

While TV, cinema and OTT content are often deemed to be ‘far-fetched’ or ‘glazed’ with cinematic fabrication, are the portrayals also a reflection of our own reality?

Various releases of 2020, most of which have been on OTT platforms owing to the pandemic, have looked at different aspects women’s standing in society ranging from sexuality, violence, social freedom and choices.