Like All Of History, The Partition Too Saw Women As Secondary, Says Oral Historian Aanchal Malhotra

A gendered event that affected millions, the Partition is still relevant to us. Oral historian Aanchal Malhotra on why it is important to know the history.

A gendered event that affected millions, the Partition is still relevant to us. Oral historian Aanchal Malhotra on why it is important to know the history.

That one chapter did not justice to the horrors that millions of people suffered, it didn’t explain the pain that people felt when they left their country and came to a whole new one. Neither did it do justice to telling us stories of women throughout history.

Which is exactly why oral historian and author Aanchal Malhotra believes we need to have more oral archives of our history. To understand what happened not just in terms of number but people too. And to ensure that it doesn’t happen again.

Aanchal Malhotra is also the author of the book Remnants Of A Separation – a non-fiction work on the material objects refugees carried across the Radcliffe Line in 1947. (In case, you’re wondering what the Radcliffe Line is, it is the boundary demarcation between Indian and Pakistani portions of the Punjab and Bengal provinces of British India)

‘When I read about the Partition in school, I never thought of it as my history. It was just history to me, despite the fact that FOUR of my grandparents migrated from Pakistan to India after the Partition,’ says Aanchal whose book completed three years recently. 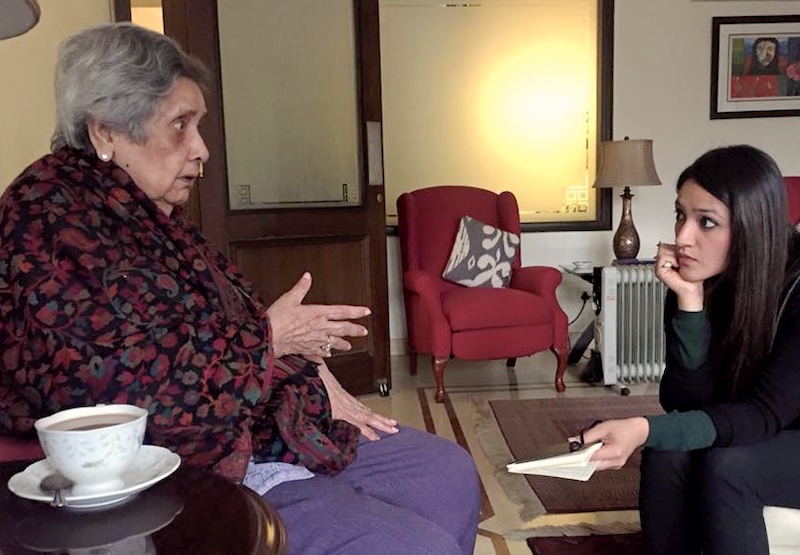 Published in 2017, Remnants of A Separation may be 21 chapters, but has far too many stories hidden inside them. What started with stories of her own grandparents is now a book opening up inter-generational conversations about an event that killed and displaced millions of people. One that affected women the most.

Though the Partition was a one-time event, its forces were at play for a much longer time with families migrating before and after. And with communal violence occurring as soon as 16 August 1946 with Direct Action Day in Calcutta. Though the line was officially drawn after the 15th August, people had been migrating well before and after it too.

Families were leaving their ancestral properties at a moment’s notice, not knowing whether they’d be back. And in such a moment, they had to decide what items to take with them – the ones that would help them set up home in a completely different country. Throughout history often only heard men’s stories of the Partition and its effect on them. While there are books written on women’s stories, they still are few and far in between.

We’ve barely ever heard women’s stories of the Partition

“All through history, we have mostly heard men and their accounts of what happened during the Partition, and how they had to start over. On the one hand we have authors like Urvashi Butalia and Ritu Menon writing women’s stories.

“But on the other, we still need to tell stories of women who left their houses they so lovingly decorated and had to be uprooted and taken to a new place with refugee camps,” she says while talking about the women and the Partition.

“Women definitely bore both the physical and the emotional brunt of the Partition more than the men did. While, yes, the men did need to go out and find jobs and earn enough to feed their entire families, the women were the backbones of the family. I believe, families may have broken down and crumbled had women not shown the emotional strength they had. They were the ones who kept the family bond alive even in the toughest of times.”

There weren’t just women who left with their families, there were the single women too. Women who left their homes with their kids since the men stayed back either to take care of the property or had already left. One such example is Aanchal’s maternal great grandmother.

She left their house in D.I. Khan, North-West Frontier Province to reach Delhi where she and her kids stayed in a refugee camp. It took them two days and two nights to reach Delhi  Since she was alone then, she had to do everything on her own – right from finding a job to earn to feed her children to make sure they didn’t lose hope.

They bore the physical and emotional brunt of the Partition

“Not only did they bear the emotional brunt on the family front but also the physical brunt of it. Thousands of women from both India and Pakistan were raped and killed in the violence that followed the Partition. Women were abducted, murdered everywhere.

“I remember stories people told me of how their families would give women and girls chilli powder or daggers to carry with them to avoid ‘being killed or worse.’ So yes, I do believe that the Partition was a gendered event which affected women in far more intimate and devastating ways than it did men,” Aanchal says when asked about the Partition being a gendered event.

She says during that time, people learnt to suppress the things that happened to them – either because they had to move on or because they barely considered it necessary. Speaking about the importance of material memory, Aanchal says, ‘At the time, memory was barely considered important. People and their stories became mere numbers. Statistics to teach history from.

“I wish there had been journalists and oral historians recording what people had gone through and witnessed. Perhaps the, we would’ve understood the aftermath of the Partition a bit better.”

Which is precisely what she is trying to do with oral history- get people to speak up more about their history and understand it. Maybe if we understood that the Partition didn’t just end in 1947 with the line being drawn, we may understand our own history a bit better. And maybe we will work on making sure that history never repeats itself.

You can find your copy of the book Remnants Of A Separation on Amazon India here  and on Amazon US here.

Picture credits: Provided by the interviewee