Don’t Miss Out On Any of Our Best Reads, and Contests. Register Now!
Newsmakers

Recently, Michelle Obama spoke on a podcast of grappling with low grade depression due to the pandemic and the recent racial unrest, along with her helplessness in making a difference.

Recently, Michelle Obama spoke on a podcast of grappling with low grade depression due to the pandemic and the recent racial unrest, along with her helplessness in making a difference.

Any time a person says the words, “I don’t feel like getting up” the response would invariably be “no time for games, pull up.” (If the person was a woman then usually, “you don’t have time for this”, “get it together.”).

‘Mental health’ is the pink elephant in the corner that everyone assumes would disappear if no one talks about it. In case a celebrity admits to depression, not many focus on the importance of mental well-being, but seek to target individuals with accusations of a cheap publicity stunt.

In The Michelle Obama podcast, the former first lady of the USA in a talk with her friend Michelle Norris, shared that she had been grappling with low-grade depression.

The episode dealt with the issues of race, identity, the ongoing lock-down, and the chaotic crises in major US cities (following government mis-management). In the course of the conversation, the two women shared their experiences growing up as black women, and how they are handling the present isolation due to the pandemic.

Michelle Obama, who has long been seen as someone who ‘keeps it real’, described “a heaviness” that seems to pervade and “highs and lows” following the situation in the US. She explained that she had to break her workout routine and that she allowed herself to take that break. She indicated in the episode that to cope, she sticks to a routine of regular exercise, mealtimes and staying outside. This acknowledgment received a lot of support from people all over.

Public sharing of experiences to deal with topics like depression can help break so many embedded prejudices in societies. Michelle Obama’s experience about coping with her depression resonated with many in her audiences who have also had to deal with issues in their mental well-being, following the cloistered but teeming social media spaces that had been the norm following the pandemic.

The cycle of ignorance

Going from recent examples in our country, it’s easy to understand why people hesitate to come forward or seek help. The taboos surrounding mental health in a patriarchal structure as ours, leaves very less space for active engagement. There is also the notion of ‘bundling up feelings’ and ‘carrying on’ to be the ‘normal’ way to deal with issues relating to mental health.

Setting aside the general negative vibes surrounding the issue, the media especially is a toxic pile-up of everything that can be wrong when the conversation deals with mental health. The stereotypes surrounding the mental health discussions often are the only representations on media outlets, and social media for its part performs a meaningless discussion arguing “why should a person be sad, in the first place?”

The cynicism of the media discourse is toxic and often deters from many coming forward to seek treatment for their problems.

The lock-down following the pandemic has started to scratch away the layers that often cloak mental illness as something that “should not be talked about.” Everywhere, the stigma surrounding topics like depression or relating to the mental well-being of individuals are being brushed aside. The feelings of uncertainty that the former First lady shared may resound to many others across race, color and gender. This feeling has expounded following the increased social media consumption during lock-down.

A very striking part of the audio discussion was that, they discussed that when guiding their daughters, they didn’t want them to fall prey to the patronizing patriarchal mold of ‘a strong woman’ (that often put women at greater disadvantage while seeking help to cope with issues). Similar to many problems, women are doubly disadvantaged with regard to mental well-being as they are often epitomized as “the someone, who holds the family together.”

Depression is often dismissed as a frivolous issue, and women face the brunt as they are often held up in unrealistic standards.

In an age where celebrities get defined only by their selfies and posts, it’s important for them to create a more inclusive persona that can be real models for change. Celebrities are people who have the power to impact discussion surrounding various societal issues. When Michelle Obama opens up about her struggles with mental well-being, it starts a wider conversation around the issues surrounding mental health.

The ‘keeping it real’ attitude makes her a relatable individual and describes the challenges of a black woman in a racially unequal society. This context helps drive important conversations around the intersectionality of race and gender.

Towards a better understanding of ‘mental health’

In similar contexts when female actors expressed their struggles, Indian media and social media do not engage in a constructive course of action. Instead of helpful engagement to cope with depression, a trial by media is often followed with the usual tamasha. Every society in the digital age, narrates mental health, well-being, issues only as euphemisms.

The inability as a society to have a decent conversation around the issue of depression demonstrates the callousness and the pattern that society usually follows. Startling estimates by WHO indicate how ill-equipped the country is to deal with mental health and the burden of treatment being a big deterrent to those who do come forward. Additionally, stigma often curtails many, particularly women to seek help because of distorted facts pass as information with regard to depression. When influential personalities, especially women reflect on their struggles, it helps many ordinary followers to gain a better understanding about topics like depression instead of pigeonholing the whole issue.

Lament Of The Unnamed Mother Of Mahabharata's Wise Vidur

The Chair: How To Be A Badass Woman In A Mostly Privileged, Insecure, Male Bastion Of Academia

Even As A Married Indian Woman & Mom I Have A Right To Wear Shorts! 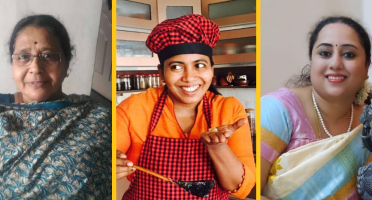 View All
No More Guilt: Exploring The Ways In Which You Can Shed Mother's Guilt
Steps To Landing Your First Writing Job - Want To Be A Content Writer?
What Are The Essentials Of Being A Good Content Writer?
Women At VMware - Meet Ipsita, Inside Sales Representative At VMware India
Women of VMware - Meet Afifa Hasan, Enterprise Sales Account Manager for VMware India
Women Of VMware - Veena Chandrashekar, Director, Inside Sales Practice
Fitness & Wellness

Just As Michelle Obama Says, Your Health, Your Rules – Take Charge Of Your Health

Health of women is thier own responsibility. Michelle Obama says so and the author gives us more reasons to believe why our health lies in our own hands!

Women’s health is their own responsibility. Michelle Obama says so and the author gives us more reasons to believe why our health lies in our own hands!

Michelle Obama has said, “Being a healthy woman isn’t getting on a scale or measuring your waistline. We need to start focussing on what matters-on how we feel, and how we feel about ourselves.”

Social media (like it rightfully should) is flooding with posts on Sushant Singh Rajput’s suicide and as a broader discussion, on mental health.