The Kargil Girl by Gunjan Saxena is a memoir by India's first woman Indian Airforce pilot, about her dream and the struggle to achieve that dream in a then all male profession.

The Kargil Girl by Gunjan Saxena is a memoir by India’s first woman Indian Airforce pilot, about her dream and the struggle to achieve that dream in a then all male profession.

When the postings had been disclosed, Assey Sir told me that I was being posted to one of the best stations and that I would be exposed to a variety of opportunities. After a break of three weeks, which I spent first in Delhi with my college friends and then at home in Lucknow, I headed back to Jammu, where an army convoy was waiting to take me to the Udhampur military station.

The Indian Air Force station at Udhampur was a long distance from the convoy grounds, so Flight Lieutenant Tony, who was the adjutant of my unit, had come with a Gypsy to receive me. Where I was expecting a warm welcome from my unit officer, all he said was, ‘Welcome to the unit, Gunjan. Put your stuff in this Gypsy and reach the officers’ mess.’ After this he sat on his motorcycle and drove away. The unit did not have an independent mess and there was a common officers’ mess in the air force station. Upon reaching, I met the mess manager, who told me that Shikha (real name withheld), my course mate who was also posted to the same unit, and I would be sharing a room on the first floor. It was a set of two rooms with a small balcony. A mess boy was assigned to us as our helper.

Shikha, a tall, lean girl, reached in the evening and we helped each other settle down. Though we hadn’t talked much with each other during training, we got along quickly in no time. When we finally went outside into the beautiful garden at the mess, we could see the entire city of Udhampur, bordered by a ridgeline of green hills. Here we got a chance to speak to some of the officers of the station. But compared to the male cadets from the academy, they were almost reluctant to converse with us and were mostly cold in their behaviour, much like my unit’s adjutant. We had a quiet dinner and went to our room to prepare our uniforms for the next day. The next morning after the mass briefing, we reached our unit by walking quite a distance. There was no difference in the behaviour of the unit officers there either; it was as if our presence was making them uncomfortable, and everyone was eerily quiet. Wing Commander Parab, the flight commander of the unit, took us to the commanding officer, Group Captain D’Silva, for our interview. The commanding officer was the only person we felt was warm to us and made us feel comfortable, while at the same time reiterated that our endeavour should be to learn and bring laurels to the unit by performing well, something that is expected of all young officers of any unit. 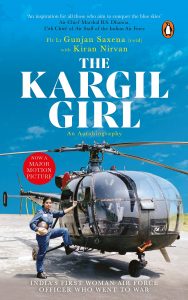 To prove our merit in our first unit, we were told to appear for a gen test to verify a pilot’s knowledge about the aircraft, functioning and controls, safety procedures, etc. The test was akin to the one we had appeared for during the training. The CO even offered his old scooter to us, since commuting from the officers’ mess to the unit location in the station was quite troublesome due to the long distances involved. We took the scooter from him in the evening and sat down in our room to prepare for the gen test, which was due the next morning. We performed poorly and even though we were scolded for our performance in the gen test, which we duly deserved, we were allowed to start flying. Consequently, an acceptance check sortie was scheduled on the third day, which was the first time I went airborne in that area and familiarized myself with the terrain, maps and other instructions. It was also the first time I flew in the hills.

Later that day, an officer told us that the reason the other officers were refraining from talking to us was because we were the first women pilot officers to be posted to that station, and prior to our reaching the station, all male officers were briefed to behave themselves while we were around and not get too friendly with us. Such behaviour was obvious and adjusting would require some time. And since there had never been women pilot officers in the station, the infrastructure required for women was missing as well. There were no separate changing rooms at the airstrip, so a makeshift changing room was made for the two of us using steel cupboards as a partition. One of us would stand guard while the other would change, and this happened for some time until a separate changing room was built. After about two months, I got my own blue LML Vespa. By then, the other officers had become familiar with our presence and that awkward feeling that we had sensed initially had abated.

I was often sent to ferry helicopters from the Srinagar airbase, where our unit’s permanent detachment was also established. During the next two and a half years, a sense of acceptance could now be felt among other male officers of the station, and we spent a good time there. In those two years, Dada cleared his SSB, went for military training and got commissioned into the Indian Army as a second lieutenant. He began serving with a battalion of the Gorkha Rifles. Both Papaji’s children were now commissioned officers.

Excerpted with permission from The Kargil Girl by Gunjan Saxena, Kiran and Nirvan from Penguin Random House. To be released on 17th August 2020.

If you would like to pick up a copy of The Kargil Girl by Flt Lt Gunjan Saxena (retd) with Kiran Nirvan, use our affiliate links at Amazon India, and at Amazon US.

Register at Women's Web to get our weekly mailer and never miss out on our events, contests & best reads - you can also start sharing your own ideas and experiences with thousands of other women here!
women achieverswomen at work