For the past few days, YogiOabs is trending everywhere. He, believes, even in 2020, that women 'need to be controlled.' Need I say more about him?

For the past few days, YogiOabs is trending everywhere. He, believes, even in 2020, that women ‘need to be controlled.’ Need I say more about him?

Every time I think people in the world cannot get any weirder, someone proves me wrong. This time, it is an openly sexist entrepreneur and self-proclaimed leader of neo-masculinity- Yogi Oabs.

Yogi Oabs has a Twitter account, and an Instagram account where he advises, Oh! sorry, reforms women and teaches them how to ‘behave.’ He also has an apparel company called ‘Anti Feminist Apparel.’ Here he sells T-shirts that say, ‘I Love Patriarchy.’  Yes, you read it right, here is the proof! 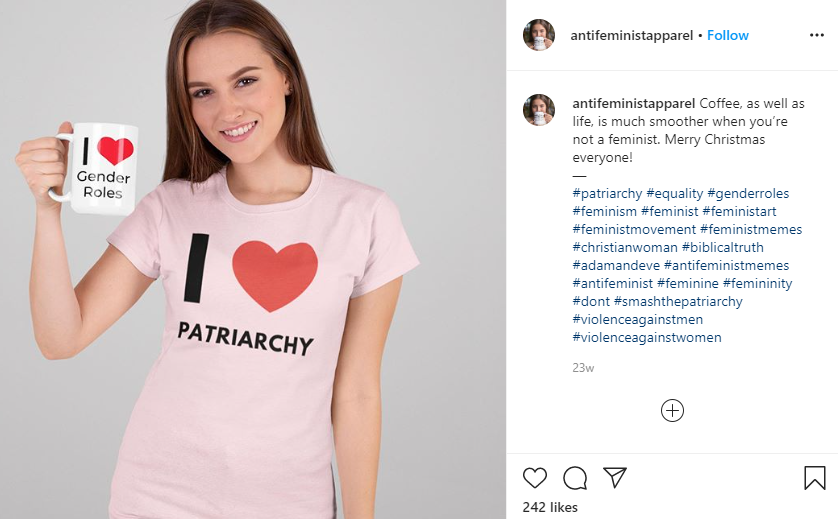 This man also puts motivational Anti-Feminist and sexist quotes. He even has a website and a YouTube channel to propagate his ideas. Also, guess what, people actually follow this person, because, Yayy patriarchy!

Women must behave because men will be men

It’s obvious that YogiOabs’ ideas are deeply problematic and this is why I say it. He defines his capabilities on his site as, ‘My area of expertise is in constructing the obedient, submissive housewife. It is commonly assumed that these women are slaves.’ Yeah because a woman’s only duty is to be a housewife. And not just a housewife, but a submissive and obedient one. 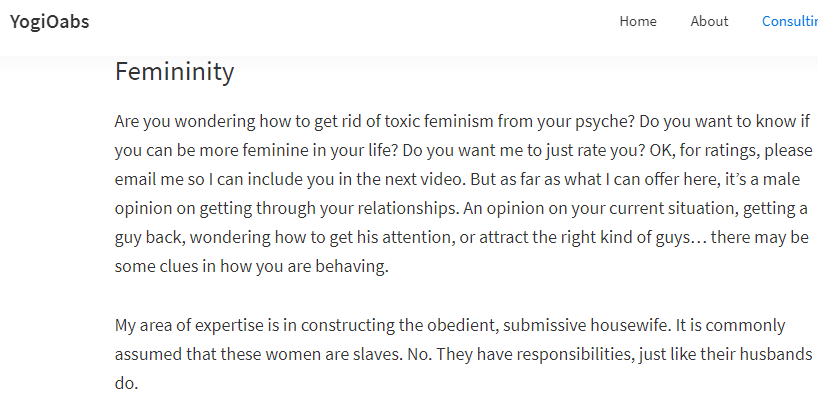 And in a typical misogynistic way of thinking, he believes, that if someone rapes a woman, it’s never the man’s fault, it’s always the woman. I mean, isn’t that what Bollywood has also taught us? Right from ‘Blue Eyes’ to ‘Laal dupatte wali tera naam toh bata,’ women have always ‘enticed’ these ‘innocent’ men, haven’t they?

If you were raped as a child, I am truly sorry and he deserves jailtime.

If you get blackout drunk, have sex but falsely accuse a guy of rape, you also deserve jailtime.

There are many terrible things in the world and rape isn’t a black-and-white issue.

just because you're not wearing a helmet doesn't mean I have the right to hit u with my bat https://t.co/e8XmLanfJ4

Rape happens with babies, old women, school going girls, handicapped & disabled & mentally challenged women too. Worse – women in hospitals lying unconscious by medication have been raped too. With such problematic thinking I wonder what you're teaching men. God save them.

He is the shining example of toxic masculinity

Neither does he seem to understand the concept of consent. This man has the typical misogyny and toxic masculinity embedded in him! And speaking of masculinity, this womankind’s saviour also teaches men how to be men.

He basically believes that masculinity is not toxic, rather the lack of it is! What’s more is that he promises men he can teach them how to ‘put women in their place!’ I present to you, a real live example of Kabir Singh.

And if you still haven’t reached the peak of cringing, there’s more! YogiOabs, in a vidoe, even goes on and justifies the rise in domestic violence during the lockdown. He actually calls it ‘natural’ and a part of ‘culture.’ Men are meant to be violent and mardon se toh galti ho jaati hai!’ (Men will make mistakes, won’t they?)

Honestly, if you are sensible, I don’t think I need to explain why this man’s content is so problematic. But if you are one of his fans, you may need some sense and explanations.

YogiOabs genuinely seems to believe that women are raped because they don’t watch what they wear and men cannot ‘control themselves!’ Men will be men, he believes. And this is problematic because it does NOT hold the men responsible for their actions. It gives them the free will to do what they want without consequences. 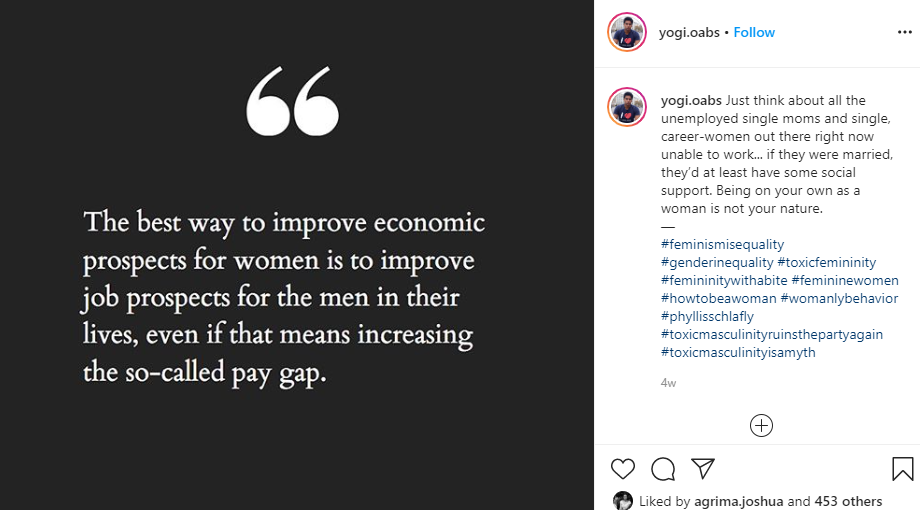 The saviour of women kind also believes that to increase the economic prospects for women, is to improve job prospects for men in their lives. Because ‘being on your own as a woman is not your nature.’ This is also problematic because even today, women are still fighting for equal rights and an equal pay.

We need to note one thing that YogiOabs is just not one person. He is the only one who has been brought into public light. There are so many others teaching women to behave according to what men want.

We have far too many examples and lessons the society gives us on what women should or should not do. However, YogiOabs is one example of how we should NOT raise our children.