Tina was haunted by the traumas of her past but doesn't she also had a right to give her life another chance?

Tina was haunted by the traumas of her past but doesn’t she also had a right to give her life another chance?

As Tina woke up to the fragrance of the fresh flowers from her garden, she felt so relaxed and ready for the day. Preparing breakfast and lunch, packing the bags, she woke up and got her 5- year old daughter Ashvi ready for her creche. After dropping Ashvi, she entered the office and was greeted by her colleagues at the completion of three years at work. It was indeed a cause for celebration.

She recalled how stepping into the previously well-known corporate world had made her extremely nervous and realise the inadvertent loss of confidence and low self-esteem that came to her while being a homemaker. A happy homemaker, she was, for ten years….until the incident! Tina was grateful for the trust her interviewers showed in her, which motivated her to upgrade and get in league with the others in the office, despite her criminal record!

A date- a first since her college days…

She put aside her thoughts to get on with her work when she saw the mail reminding her of the ‘date’ that she had in the evening. A date- a first since her college days…the arranged marriage encounters could not be counted as ‘dates’!

It was evening and Tina got ready to leave. She had quick touch up of make-up in the car and as she entered the cafe, she could hear her heart beating fast. ‘What the hell’, she thought, ‘I am not some teenager going to meet my crush for the first time… but I guess, it is always like this, no matter what age’.

He was there, giving that infectious smile of his! She sat in front of him and did not hide her anxiety. They both talked and had a short but good time together. He was the same charming man she had met last month at a friend’s place. She looked at the watch. It was time for her to pick Ashvi. Today, she had to tell him before leaving.

Monsters of the past relationship

‘I had a criminal record. Four years back, I saw my husband raping our house-help and I hit him with a spade’, Tina blurted out.

The change of expression on his face was expected. There was a quick bye and Tina rushed to pick up Ashvi, all the while, trying to get him out of her mind.

Though the case came in her favour, making divorce and getting rights over her daughter easy…she was shaken for life with the incident and what followed after that- the social stigma, the threat calls and shaming from her ex-husband and his family, the insistence of her family to forget whatever happened, withdraw the case she had filed on behalf of the house-help and forgive him to start all over again with him.

But the mere thought of raising her daughter with a rapist made her sick. She stood by her decision and ignored the unpleasant whisperings, sometimes loud ones that she got even now. Behind the brave face, she still had nightmares, giving her sleepless nights and anxiety attacks…

Next morning, being a Saturday was a leisurely one, with just the mother and daughter having their time together…when her phone rang, and it was him. “I want to meet you and your daughter. Can I come over today?”

There were mixed feelings …tears coming down her cheeks… she had finally started living this new life, accepting the change and the man she had started taking a liking to, seemed to not care about her past.. whether they had a future together or not, she was not sure but at last, she had come out of her shell and opened her arms to new beginnings! 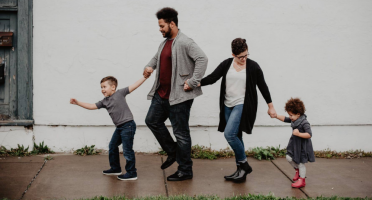