Women Have Always Been Uprooted To Go Elsewhere, So What Does ‘Home’ Mean To Us?

Annie Zaidi explores the meaning of ‘home’ and ‘belonging’ through the experience of travel, in her memoir Bread, Cement, Cactus.

I am a Canadian-born, Delhi-raised girl, who attended international schools, developed a rather discernible accent and have suffered an even more embarrassing lack of fluency in Hindi. (which I’m working on!).

The idea of home for me has always been difficult.

Much more than being a memoir, Bread Cement Cactus is an exploration of the meaning of home and belonging from unexpected angles which intersect with author, Annie Zaidi’s own personal experiences of the two often elusive concepts.

In this book, she explores these themes through a variety of different places – both physical and philosophical – from the Garāsia, Bhīl and other tribes of Rajasthan, to the people of Azamgarh, to the lost intellectuals of Allahabad/Prayagraj, to those who pass from this world.

Meaning of home for an immigrant

When does an immigrant truly belong? What happens when they start belonging more than those who were there before?

She contrasts two very different scenarios of immigrants and belonging.

Mumbai is a city of immigrants, and yet there is a strong nativism that lies beneath the surface, and those from the outside are sometimes rather unwelcome.

On a personal level, as someone who is an immigrant to Mumbai myself, I can certainly identify with some of the things she speaks of – being an outsider, a single woman, and from the North.

Contrast this to the situation of the Garāsia living around the industrial town of JK Purum, whose home has been invaded in the name of profit, and we can see how two situations that seem quite similar at first can raise the same questions but be quite different.

Home – the meaning of home, and belonging, in the sense that Zaidi describes it, is also intertwined with power. Even if a certain population was here first, if the tides of dominance change, for example for certain Adivasi communities, their home as they know it, may cease to exist. They may become second class citizens in the place they belong.

The place where you came from is intrinsically linked to where you belong, but when population dynamics and the tides of history turn, particularly in light of things as recent as the Partition, but even those as ancient as the Aryan migration, those ideas of who is at home where, is prone to shift.

The meaning of home and belonging, while migrating, is therefore a slippery concept, for those who migrate, for those that stay behind and for those whose homeland accumulates new populations.

Racial, religious and gender identity have and continue to play a strong role in belonging and the meaning of home.

Zaidi examines the plight of Indian Muslims, and the impact of the partition, and themes of interfaith love, and the place, or rather the lack thereof for women – not belonging or welcome with their parents, nor wholly with their husband’s family

Our divorce from history and re-colouring of the past in ways that seek to dilute the diversity that is such a major part of our heritage, can also be in a way, a way that home shifts, changes and morphs. If we cannot rely on belonging to what we came from, when it is recast in misleading light, what, then can we rely on?

Language is another dimension in which people belong or do not belong – and the politics of both Sanskrit (and the subsequent Sanskritization of culture) as well as the largely political growing anti-Urdu sentiments, play a role in shifting the definitions of home for many.

The idea that the language of Sanskrit could have come from outside India is as threatening as the idea that Urdu is intrinsically an Indian language.

Religious persecution is another area where power and politics seep into ideas of belonging. Zaidi touches on ideas of purity and origins. An interesting angle she examines with regard to this, is that of love – particularly interfaith love and marriage.

The idea of purity as a potent and oppressive tool, and how if you allow it to become diluted, particularly by a force as moving as love, you lose the power to hold movements together.

The ‘other’, and belonging 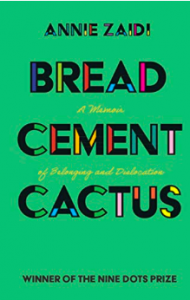 The common thread running through many of these, perhaps with the exception of death, is that of “other-ness”. Zaidi explores this as she finds herself in varying spaces sometimes occupying that of the politically/economically dominant, and other times, that of the repressed or “other”.

The flow of her thoughts and ideas is peppered with personal anecdotes, learning and experiences, and it feels almost like we are on this journey of her life with her, experiencing all the meanings of home alongside her. It is a brilliant, incredibly moving experience.

Meaning of home beyond a physical world

She also examines the angle of death – which, according to the Sufi faith, is the final return home. Where are we born, and where do we die? Are these places we belong?

Although bread, cement and cactus are decidedly physical things, the home that Zaidi finds and builds for us is much more metaphysical and intangible.

The other unintended side effect of reading this book is she quotes a lot of interesting reading material, some of which was already in my TBR, but some of which is new. Of course, I wasn’t really short of books, but I’m always happy to add more!

It is a slow build, particularly in the beginning, so if you find yourself struggling in the first chapter – stick with it. It comes together beautifully and it’s worth the wait.

If you would like to pick up a copy of Bread, Cement, Cactus: A Memoir of Belonging and Dislocation by Annie Zaidi, use our affiliate links at Amazon India, and at Amazon US.

What Should ‘Home’ Mean For A Woman? The Shooting Star Redefines This ‘Universal Truth’