“I lived with Bhabi from the time I was three years old,” reminisces Mira Saraf about her grandmother, “There was no home without Bhabi.”

You’re never ever really ready to let go. There is no right time for death, but there are times that it is preferable to the closest available alternative.

My grandmother, whom we all call Bhabi, for reasons I don’t completely understand, was an intimidating figure, despite her relatively small skinny frame. She had a sharp temper and a tongue that could cut someone down to size with a single word. She was a magnificent cook, and extremely artistic, adept at knitting and sewing as well.

A fiercely independent, even difficult woman

She was fiercely independent, cooking her own meals up until her nineties even if it meant she had a disproportionate amount of beans aloo in the fridge at all times (she loved aloo). She would sneak lots of salty snacks that she was not supposed to have, especially chips. Then she would come to the dinner table and loudly wonder why she was never hungry. Often we teased her about her illicit munching but she vehemently denied it.

She was a difficult person to live with at times, being prone to negativity and living in the past. The way things were before, always seemed to her like a better place, regardless of her actual attitude at the time. I think she struggled with losing her faculties and her independence, and chose anger as a coping mechanism, lashing out at those around her she loved most. She was not an easy mother-in-law, though to be fair it was probably due to the treatment she received herself. It is a gift to be able to be happy and at peace, and this is something she really struggled with. 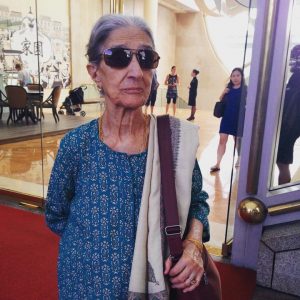 A woman to reckon with

It’s strange that as we get older we grow more and more unreasonable, almost like we’re toddlers again. Bhabi entered this stage some years back, getting angry and upset, pushing people away and yet clearly craving company, and feeling lonely. She started to lose her memory, and took to asking the same question over and over again, often driving all of us to groan.

This was most common when my parents would travel. She would keep asking who was going and how long they were going for. She would do it so much, and as soon as they left for the airport, would promptly forget about them, and engage in lengthy conversations about God with my aunt, who would come to help house sit.

I’d do anything to get that Bhabi back.

In November 2017, a few weeks after my father had knee replacement surgery, Bhabi fell down.

We’re not sure how she fell, whether she slipped or she had a stroke, or what happened, but she hit her head. As my father was immobile, my mother and I took her to the emergency room. In the ambulance, we had to keep stopping her, as she kept bringing her finger to her scalp, and back down, seeing blood on her hand and asking “did I fall?” We were worried about her infecting it.

She got a staple on her scalp, and bravely sat through some painful examinations and tests. We were there for hours that evening, I remember: it was a rough night. We were allowed to bring her home that night. I stayed an extra week, to ensure that she would be okay, and as she seemed to be recovering, I came back to Mumbai.

In February 2018, she had another fall. I booked the first flight out, rushed to the airport and traveled to Delhi that same evening. Fortuitously my uncle and aunt, who are both doctors, were also traveling to Delhi that evening.

After this fall, Bhabi was never the same. She seemed to have lost the part of her that made her herself. It was like she was in a cocoon, barely aware of the world outside herself. She was in hospital for several days, but barely responded when spoken to. She kept saying “aao, aao,” (come, come) while holding out her hand to whomever was in front of her.

When she returned home she required nursing and attendant care. And so started the steady stream of people into and out of our house. My parents stopped doing most things they enjoyed, and gave up on the idea of privacy all together. My grandmother now seemed to be fading into her own world. It was hard to tell what she could see, and what she could hear.

The first day I started to mourn her, was the day she could no longer remember my name.

The irrepressible woman I remember

I lived with Bhabi from the time I was three years old, till the time I left home for University at 17. When I came back to India, we spent another three years under the same roof. There was no home without Bhabi. 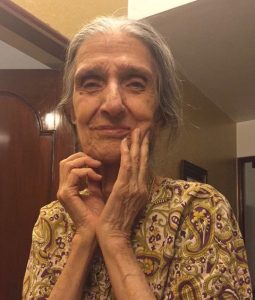 The times she was most beautiful were those when she allowed herself to admit she was being a brat, and her eyes crinkled into a smile, or she’d start to laugh. She would also scrunch her nose up and screw up her face when food was placed in front of her, and call it shikas (a Kashmiri abuse), but more than once would chomp away at it merrily when she thought nobody was looking.

One time on a family trip, we were sharing a room, and she was driving me bonkers asking me all sorts of questions. I am ashamed to say I snapped at her. A little while later I heard her say in an adorable child like voice “are you mad at me?” I started to laugh; it was difficult to be angry at her then. I smiled and assured her I was not.

One of her most famous incidents happened while we were in Malaysia. My brother and I were sent off to the kids’ arcade (we were old enough not to need a babysitter but too young for adult entertainment) while my parents and grandparents went to the casino. Bhabi was at the slot machines, and found much to her irritation, a man trying to explain something to his wife while enthusiastically gesticulating, and in the process elbowing her. So she turns to him and says:

He turns around. She continues, “excuse me you are bothering me.”

“I am bothering you?” He asks a bit taken aback.

“Yes, you are bothering me. You should say sorry.”

I’m not sure what happened at this point, or even if this was the verbatim conversation, but she definitely cornered this guy. That was Bhabi, she didn’t take any shit from anyone.

Another time upon discovering that the neighbours had placed a few evil eye type masks towards our house, she angrily declared she would put four or five masks in their direction. But at the same time she was so intensely loving that I do believe when I found out I needed glasses, she kept pushing me to eat carrots, and even made gajar ka halwa in hopes that it might help. I didn’t have the heart to tell her with three generations of near-sighted people, most of whom were avid readers, there was not that much hope for my eyesight.

Our culture expects us to care for our elders, but what few people talk about is how difficult that is.

Caring for Bhabi in her illness

My parents have aged decades in the last 1.5 years. They have spent hours agonising over what is right for her and what is not – as well as spending hours managing the attendants, who come with various degrees of competence. They have watched this woman who was so strong and so fierce disintegrate into someone who barely seems there. She stopped eating solids, and needed her food ground up. She cannot bathe or go to the bathroom without assistance. She cannot even recognise most of her own family.

They’ve been strongly supported by my aunt and uncle who are doctors, and have been with them every step of the way on medical advice. My parents aren’t doctors but they’ve had to take tough medical decisions, coping with the resulting emotional turmoil the best they could.

Some days ago she had an attack of some kind. It seemed like a stroke but apparently wasn’t one. As I write this she is on oxygen and an IV drip. She is barely conscious, hanging on by a thread. 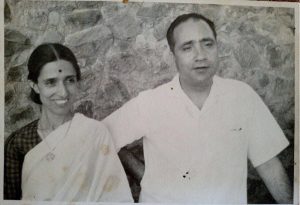 With my grandfather in younger days

My father wrote a blog today that brought tears to my eyes even though I knew about every single thing he had written. It was basically about being on death watch, waiting for her last.

While hospitals are out of the question (they may keep her alive, but at the cost of very invasive procedures that she herself would probably not have wanted) but they could not bring themselves to take out the IV – as it was the only thing sustaining her.

Today she is not responding and I am on my way to the airport. I don’t know whether she will make it till I get home. I find myself torn between grief and wanting her to find peace, and wanting my family also to find peace. I really cannot tell you what I want to be on the other side of this, but I know one thing – she will always be a part of me, and I of her. I love you Bhabi. I hope you find whatever it is you are waiting for, and I hope that you are not in pain.

A ‘Bhabhi’ Is Considered A Woman Worthy Of Respect Because She Obviously Belongs To A Bhaiyya!

I Was 30, She Was 52 And An American Woman. Yet We Became The Best Of Friends!

Would You Like To Know The Fascinating Story Of My 100 Year Old Ammamma’s Life?