Promoting acid attacks and violence against women on TikTok goes on to show our vile thoughts even today. Will this kind of content creation even end?

Promoting acid attacks and violence against women on TikTok goes on to show our vile thoughts even today. Will this kind of content creation even end?

Update: In the latest update of TikToker Faizal Siddiqui’s viral video, he released a statement saying, “The first half of the video has been cut and it is being used to show that I am promoting acid attacks. And in the first part of the video, it can be clearly seen that I am drinking water and then throwing it it’s Water! Acid kaun peeta hai.”

He added that the girl in the video is a makeup artist and she is just showing her art and not promoting an acid attack. Further, he also said that the video is a month old and releasing it now shows how people are trying to capitalise on the YouTube vs TikTok feud. He mentioned that although his intention was not to project the way the video is been interpreted he still apologises to everyone if they feel offended or hurt.

Apology or victimising yourself?

While Faiz did apologise his way of countering the allegations saying it was not acid is not justified. Firstly, even if it’s not acid, showing a man throwing water that he drank first or even throwing anything at a woman as revenge is wrong. It promotes the idea of toxicity.

Secondly if it was meant to be water, the girl showing her ‘art’ was not required. When water is thrown at someone’s face the face doesn’t turns out to look like that. Until and unless you are just dumb to do that or you are trying to project an acid attack.

In his apology Faiz is asking that acid kaun pita hai? Well, I ask him whose face becomes like that because of water? Apologising for your actions is the right thing to do but playing the victim card, through that apology is not!

In the light of the viral YouTube vs. TikTok feud, another video is making the news on social media. TikTok influencer Faizal Siddiqui posted a video on the app promoting acid attack.

Siddiqui, who has more than 13.4 million followers posted a nine second clip where he says, “Did the man you left me for abandon you?” While that was not bad, he further goes on to depict an acid attack! Really now?

This is Faizal Siddiqui, brother of Amir Siddiqui. Promoting acid attack through his Tik Tok account and they call themselves as Social Media influencer! this cringe activity is not called influencing but promoting crime. They are such a curse!! #BanTiktok pic.twitter.com/XY2g3kRQN9

In light of the video, National Commission for Women (NCW) wrote to TikTok India seeking removal of the video and termination of Siddiqui’s account. The video, has since, been removed from the channel for instigating violence against women, India Today reported.

@NCWIndia have contacted Tik-Tok India @TikTok_IN to remove the video & delete the account of #FaizalSiddiqui that instigate committing violence against women. pic.twitter.com/1QMHpUgQs8

Glorification of trauma is disgusting

According to several data reports, India has the highest number of acid attacks in the world. In a country where at least one acid attack takes place a day, how can one create such content around it? The other question it raises is that of what is it about trauma that makes young men think of making content on it?

Why I say this is because this isn’t the first time TikTok is called out for inciting violence or hatred. The app is known for its misogyny, classist remarks and even homophobia. Spread of hate speech, violence,  pornography and no safety of privacy on the app even led to it being banned. 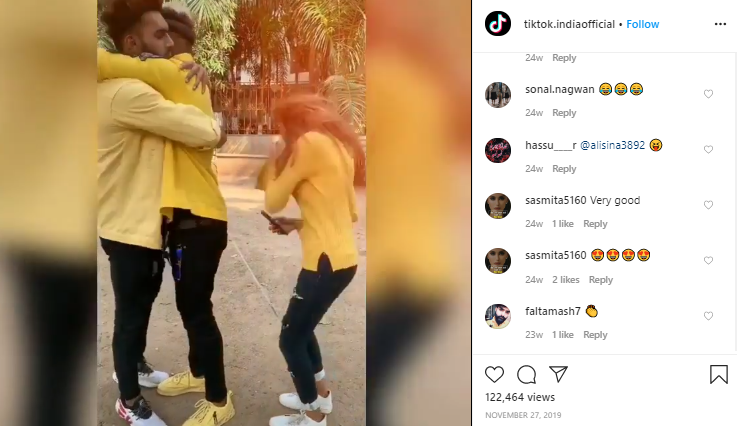 Another trend that went viral in India a while ago was that of hitting women and promoting domestic violence and stereotypes. Content creators on TikTok have quite often been criticised for their baseless and over-the-top content.

However, in the YouTube vs. TikTok debate, several YouTubers too were called out for their sexist and homophobic remarks. While YouTube removed all of these videos, they were viewed several people who seemed to agree with them. Both YouTube and TikTok have had their responsibility towards spreading homophobia questioned.

Content creation is not about the evils, is it?

All the slurs used, the glorification of the misogyny and violence on TikTok are a reality for a number of people in our country. Fear of being hit, or have acid thrown on them for rejection is one that many women in our country still face! It is not something to have content like this around.

Similarly discriminatory slurs are not just statements. they are the trauma that women and LGBTQIA+ community go through everyday. And using these as a way to insult will influence other people to do so too.

Content creation among youth has somehow become glorification of social evil. And while the content creators are at fault, most of their followers too, do not see issues with this and that plays a role in promotion our deeply flawed mentality.

It is high time content creators, like movie creators, take the responsibility of making content that doesn’t influence people negatively. While the video was removed, content creators need to understand the impact their videos or even views may have on their followers.

Though not all content is to be taken seriously and critiqued, a line between needs to be drawn to differentiate the insensitive from the funny. Moral sensibility needs to be exercised to decrease and eventually end the glorification of any and every social evil.