An unrelated but similar Bois Locker Room type chat on Instagram was revealed to be fake. Though, just as wrong, does that negate what the boys did?

After the breaking news of the horrifying ‘Bois Locker Room Chat’ on Instagram was investigated, new details have cropped up. One of screenshots from a completely different conversation, not related to the Bois Locker Room chat, is making news. It was a screenshot of a conversation between two young boys on Snapchat.

The screenshot showed a conversation where a boy named Sidharth is seen plan an assault on a minor girl while talking to another boy. This conversation where the boy is casually suggesting gang-rape, never happened on the private Instagram group. It is not related to the Boys Locker Room case.

And here’s the horrifying truth

After a recent investigation, the Delhi Police found that the Snapchat conversation was fake. The New Indian Express reported that according to the Cyber Cell’s investigation, “Sidharth” was the girl herself.

She pretended to be “Sidharth” in an attempt to “test the other boy’s character.” There is no justifying the girl’s actions. Pretending to be someone else and planning an assault or making false accusations on anyone is wrong.

After this news broke, social media was instantly flooded in defence for the boys in the “Bois Locker Room” page. This incident has given the social media an opportunity to dismiss the entire feminist movement yet again. And all the while, they completely dismissed the fact that police never said #BoisLockerRoom was fake.

Let’s clear out some facts because we form any conclusions:

We all know what happened in the Boys Locker Room incident. There were plenty of screenshots shared by some Instagram users.

These screenshots revealed how in a group called ‘BoisLockerRoom’ pictures of underage girls were shared, and morphed and objectified. The participants of the chat went on to make some filthy comments about the girls as well.

After the screenshots of the chats were revealed, the same group of boys were making plans of leaking nudes of the girls who posted the screenshots. This was an attempt to defame and scare the girls. And all these things were happening on Instagram.

Among the screenshots that went viral, there was a Snapchat conversation too. This screenshot showed a conversation where a boy named Sidharth was planning to a assault a minor girl.

Now the recent investigation has proved that the Snapchat conversation is fake, not the boys locker room conversations. 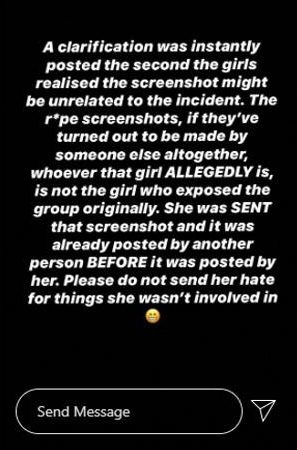 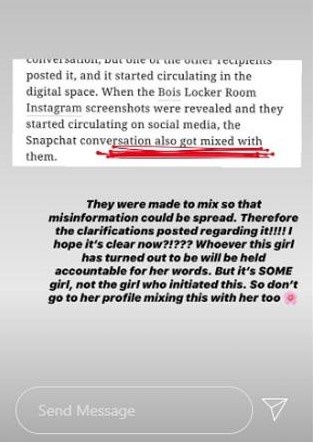 Both the incidents are deplorable

According to police, the two screenshots from two separate platforms got mixed up “by coincidence” due to the sensational nature of the case.

“This Snapchat conversation about assaulting a girl had nothing to do with the Bois Locker Room group. It is a separate conversation, on a separate platform. Due to its sensational nature and due to its availability in different student groups, it got mixed up with the ‘Bois Locker Room’ case,” a senior police officer told The Print.

While nothing can justify the girl’s acts on Snapchat, it does NOT in any way negate what the boys did. And as a feminist, seeing women use the ‘women card’ to get things done is heartbreaking. Young, privileged girls internalising and doing things like this is a shame and it is definitely NOT what feminism wants.

And because of cases like these, even the real cases are scrutinised and called fake. All these things make it even tougher for the actual victims to speak up.

I am against the girl’s actions and I believe she needs to be punished. However, I am also against the people calling the Boys Locker Room chat a fake one and the ones calling out the entire feminist movement.

We need to remember that both the Snapchat issue and the BoisLockerRoom issue quoting police report ‘are different.’ And as a feminist, to me, they are equally offensive & deserve legal action.

The wrath on social media

As soon as the news of Snapchat conversation went viral, several men started questioning the idea of feminism. They started using terms like ‘pseudo-feminism.’

Now call those pseudo feminists who were saying "men are trash" no they are not "trash" ..stop this shit!!

All the hatred and comments went on to the extent that people even confused the women who shared the actual screenshots with the girl who pretended to be Sidharth.

Many people dismissed the entire “locker room” controversy as a ploy by certain women to ‘defame’ innocent men. Also, many pages out these demanded feminist say ‘sorry.’

Shocked by getting the truth behind #BoisLockerRoom 😏
Being a girl I feel ashamed on this but it is very true that in today's world trusting a girl is very hard.
This generation of girls/women is TRASH.#BoysLockerRoomTruth#BoisLockerRoomcase pic.twitter.com/WclSjDo14P

Not all Men are trash, some Women are trash too!!!
A girl is innocent until proven guilty
and a boy is guilty until proven innocent.
Our society needs an attitude makeover NOW! #ArrestSwatiMaliwal #BoysLockerRoomTruth pic.twitter.com/GDRJt1kuXd

Now as a feminist why must I say sorry?

Yes, I accept that the Snapchat conversation was fake. I condemn that and demand action against that girl.

But it doesn’t mean that boys locker room chats don’t exist. They very much exist as 27 boys are being questioned by the police for the group and its filthy comments.

The conditioning is the problem

We need to understand that the entire Boys Locker Room and this Snapchat conversation issue has, yet again, brought out the issue of upbringing and conditioning. The culture where juveniles are not afraid of talking filthy about women is a problematic culture that needs to change!

Rape allegations are always intertwined with credibility. Women are often asked what they were wearing, why they were out so late and why they stayed silent about their assault. And a perfect example of this would be the women who were put on a social media trial during and after the #MeToo movement. These were the women who chose to raise their voices and were shamed and questioned relentlessly for doing so.

And this denial against women’s issues comes from deep-rooted misogyny and a culture that has conditioned society to not take women seriously. Although the Snapchat story is fake, it does mean that heinous crime like gang-rapes don’t exist. Though a woman is at fault here, that, in no way, means we should discredit every woman who comes forward and shares her truth.

The question is the credibility

Should we let one false story, a dangerous gimmick deter us from believing in women’s stories? No! We have to understand that it takes a lot of courage for a woman to come forward and file a complaint of complaint of sexual harassment.

One of the reasons why a lot of women choose to speak on social media is because several men in power can turn the law in their favour. And because going to the police isn’t really easy for everyone, for the most obvious reasons.

However, does that mean social media is credible? Not always. However, it does mean that we should try to create a safe environment for women to speak up. And several studies report, that the percentage of false cases of rape are considerably less than the genuine ones.

This post is not against men neither does it aim to demonise them. But what is ironical is that men often come out with #NotAllMen whenever their community is accused. And these are the same men who shame the entire feminist struggle. They compare all feminist to nazis calling them feminazi. All this because a few women indulge in false accusations. Hypocrisy much?

In the end, I would like to say that when the entire boys locker room incident went viral, many women shared stories of harassment. How they have been threatened by such groups in their schools. And how they heard rumours about themselves.

Boys talk is a reality, we all have a memory of that. Of male friends calling girls a ‘slut’ for the length of their school skirt. And of ‘bros’ just hanging out playing soccer and making comments about girls’ bodies. Of boys sharing details of their sexual ‘adventures with their girls’ with their friends. And of women talking trash about other women. All these are a reality, and all of this is wrong. And this is a part of a culture that needs to be questioned.