Justifying all of men’s actions as ‘men will be men’ needs to stop right now! A post on Instagram about a ‘boys locker room’ conversations shows us why.

Editor’s Note: In light of recent developments that indicate the probable inauthenticity of the Snapchat conversation, that section is removed from the article.

“It is reported that the group is used for sharing objectionable pictures of minor girls and young women along with their personal information. The members of the group have been reported to have discussed techniques of raping women and gang-raping minors,” said Swati Maliwal in the notice.

According to the New Indian Express, the commission also asked the Delhi Police to take some action against the boys by May 8th. Reacting to the controversy, the Delhi Police said that they are “analysing the social media posts and are looking deeply into the matter.”

Deputy Commissioner of Police, Cyber Crime, Anish Roy said, “We have come to know about this through social media monitoring. We haven’t received any complaints in this regard so far. However, we are analysing the social media posts and are looking deeply into the matter,” as reported by New Indian Express.

Remember when around the US Presidential elections, one of the conversations of the current President Donald Trump went viral? The conversation from 2005, where he bragged in extremely vulgar terms about kissing, groping and attempting to have sex with women was nothing short of vile.

Not just a locker room talk! 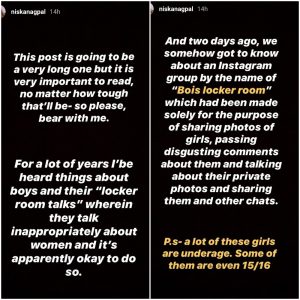 She posted in her story ‘About two days ago we (she and her friends) somehow got to know about an Instagram group by the name ‘Bois Locker Room’ which has been made solely to share photos of girls passing disgusting comments about them and talking about their private photos and sharing them on other chats. A lot of these girls are underage some of them are even 15/16.’

After this, she shared several screenshots showing names of the participants and the talks that happened in the group. The messages were full of pictures of girls and boys full of filth objectifying them, making seriously objectionable comments about their body and how proudly they’ll f*ck them. 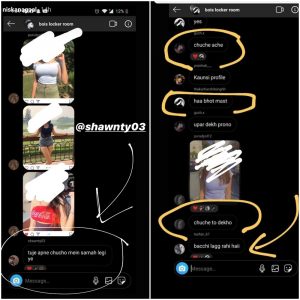 She also said that such groups morph pictures of girls, share their Instagram accounts and stalk or even harass them. The screenshots show boys, who themselves are barely 17 and 18 trash talking about mostly underage girls. 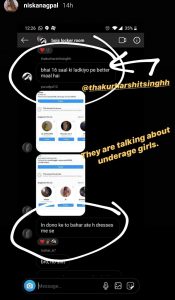 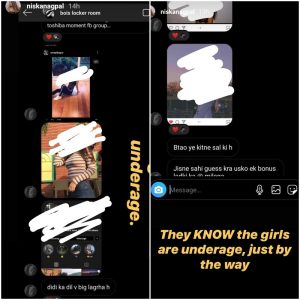 All of this is done under the shelter of ‘Boys Locker Room’ because that’s what boys are meant to do in a locker rooms, right? Though you must be wondering that this isn’t the first time we are hearing of men trash talking about women, so why is there such a big deal? Well, just because something has been going on for centuries, doesn’t make it right, does it?

After these girls posted the screenshots the news went viral within the blink of an eye. It was on Twitter, Instagram, Facebook everywhere. Many girls started tweeting about how the group had boys from their class and how terrified they feel now because of all of this. A girl whose photos were shared in the group by the boys even messaged the user how she is just 14 and had no clue about this disgusting group.

A group of south delhi guys aged 17-18 types have this ig gc named "boy's locker room" where they shit on, objectify and morph pictures of girls their age. 2 boys from my school are a part of it. MY FRIENDS AND I ARE FREAKING OUT THIS IS SO EWWW AND NOW MY MOM WANTS ME TO QUIT IG 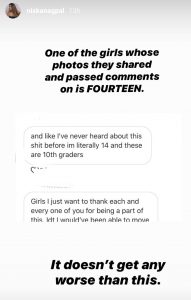 While on one side, several women are speaking out against the filth, there also were some girls standing up for these creeps! Several girls posted on their Instagram stories how the user and her friends were sharing names of boys who weren’t even active on the group! 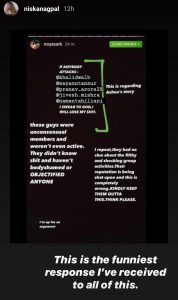 What we need to understand here is that even you aren’t causing the filth but watching the others do it, you are equally at fault! And as if, all this wasn’t enough, as soon as the stories went viral, another group was formed. This group was made for the simple purpose of finding ways to defend the boys. And sadly enough, most of the participants were girls. 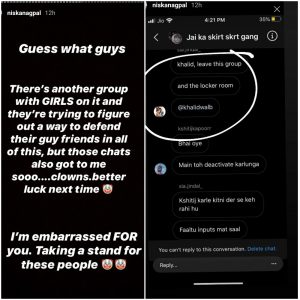 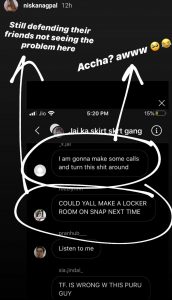 Rape threats, release nudes that’s what one gets for speaking up!

I have a question, what is the best way to show your masculinity and threaten girls? The answer is- rape threats! Because the easiest way to shut girls up is to threaten them! 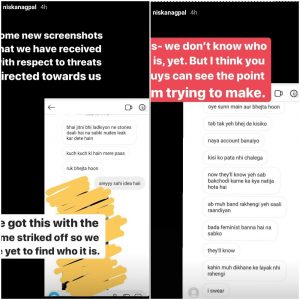 You see how easy it is for offenders to rattle and scare a girl. It is like let us blame the girl for keeping her account public. Or blame her for posting her photos and letting unknown people see her pictures. It is all her fault, we need to make sure she knows.

And despite the girl being at fault, her community dared to question the men? Let us send rape threats and defame these girls and men will just get out of this happily and proudly because ‘men will be men.’

A mirror to our society

It isn’t a hidden that men objectify women. Objectification happens in private chats as well as on streets as eve-teasing. Despite men objectifying women, they are told to cover up their bodies. They are told to not be social because ‘ladke aise hi hote hai. There’s nothing new or anything that can be done about it’ (Boys being creepy is normal.)

After all, Locker Room Talks are a sterile environment where men can blab about non-consensual sexual contact with women right? We need to understand that objectifying women, sending across their private conversations and pictures is not normal ‘manly behaviour.’ It’s sexual harassment. Plain and simple.

Bois locker room is straight up sexual harassment. If you're even thinking about defending it you're complicit in every form of discomfort and abuse a girl has faced since puberty, sometimes even before. Stop normalising this under the garb of 'boys will be boys' it's disgusting.

This ‘locker room chat’ reflects the deeply flawed mentality of our society. Mostly where men commit filthy crimes and women come out to support them, victim shaming their own community.

It is a reflection of how young boys in our society think that they have a right to exploit women in any way and nothing will happen to them. All of this because that’s how we have conditioned our boys to grow up like.

The conditioning is so deeply rooted that despite being exposed, these boys thought of rape threats rather than apologising for their criminal behaviour. Also, I will not be shock if after a few days these boys disable their account, change their handles and just get away with everything. Because that’s what happens men mostly get away with whatever they do (I hope I don’t have to remind you about Donald Trump again)

But what about the women?

Well, just like always, we will live in fear. A fear of making some parts of our lives public, posting photos and trusting men. A fear of our photos being leaked, of getting raped, of being objectified. And all of this just because ‘men will be men’ as society just doesn’t want to do anything about that.

I’m disgusted to my very core but the fact that I’m not at all shocked and there are people who are defending these 16-17 y/o delhi monsters is beyond me.
I told my mom about this situation and my her response was ‘delhi se aur umeed bhi kya rakh sakte hai’

This entire incident also raised back the #NotAllMen. Well, in the end, I just want to say true not all men are creeps. At the same time, it is also true that every woman, at least once in her life, has faced sexual harassment. It’s high time women stand up together and men start taking accountability.

It Is Not ‘Bonding With The Boys’ If You Objectify And Plan To Rape Women!