Adele May Have Won At Least 9 Grammy Awards But We Still Judge Her For Her Weight!

Amidst a pandemic, a picture posted by British singer Adele sent fans into a major frenzy. Her ‘new look’ makes you wonder if that’s all she’s worth?

On May 5th, British singer, Adele posted a picture on Instagram which racked as many as 10 million likes in 24 hours! The picture showed the singer in a black dress, on her birthday, thanking friends, family and followers for their love. She also thanked the frontline healthcare workers for their services.

However, the first thing on people’s minds was her sudden body transformation and weight-loss. 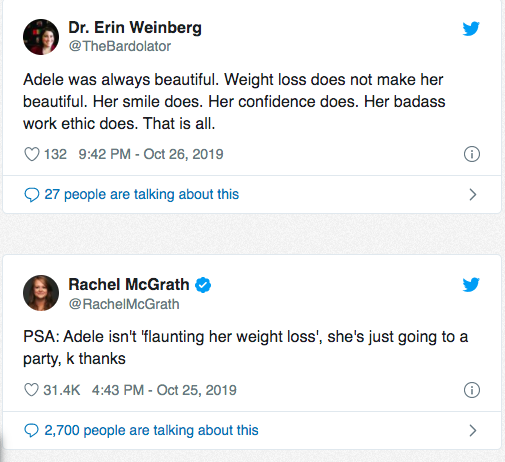 And once again, the internet had thoughts. Right from speculating about her diet to branding and accusing her of promoting ‘fat-phobia,’ and adhering to sexist beauty standards as well as ‘flaunting her new body.’ She was called it all. 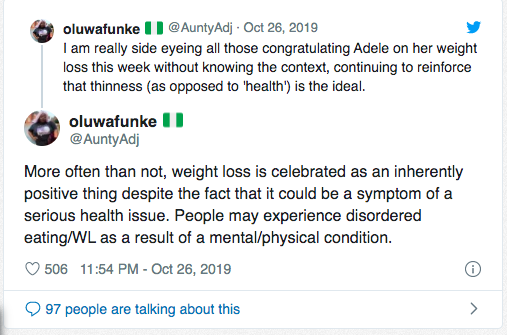 Adele’s former trainer himself defended her from the ‘fat-phobic accusations.’ The trainer said, how the negativity greatly undermined her work and journey. Even after her pregnancy and world tour for her album 25, Adele made good lifestyle choices and healthy eating decisions.

The glare of the spotlight

“I’ve never wanted to look like models on the cover of magazines. I represent the majority of women and I’m very proud of that,” said Adele during an interview with People. She was 23 at this point. Yet, the singer was criticised by the likes of Karl Lagerfeld and many high-profile celebrities. The vicious cycle never seems to end.

A number of articles went into gross detail and description about her appearance. They cited her ‘svelte new figure,’ ‘long toned legs’ and ‘slender shoulders’ and how ‘beautiful’ she was as though she were any less so before.

Her body seems to be the subject to what people feel

The recent criticism behind Adele’s new body once again highlights the difficulties of being under a perpetual spotlight. After her time away from media attention, the first thing that seems to be the talk of the town is her body; as though it is a task or an object to be appraised. Her mental and emotional well-being after her divorce or even her battles with postpartum depression and alcoholism do not make an appearance.

Adele’s body no longer seems to be in her own control as it is subject to the criticism, condescension and judgement of the public eye. Some even reduced and trivialised her weight loss journey. It was called her ‘revenge-bod’ post her divorce last year. This completely disregards her personal and emotional challenges.

Then there are others who believe that the sudden transformation was for the timely release of an album or project. Meanwhile, the sole purpose of her weigh loss could have been anything else!

The backlash and outcry against Adele’s body raise bigger questions about self-image and the body positivity movement as a whole. We are meant to accept all shapes, and sizes and celebrate each other regardless. But aren’t we doing Adele a disservice by taking away her agency and autonomy over her choices? Fitness and healthy living are an essential part of self-care and acceptance and we have a right to it. 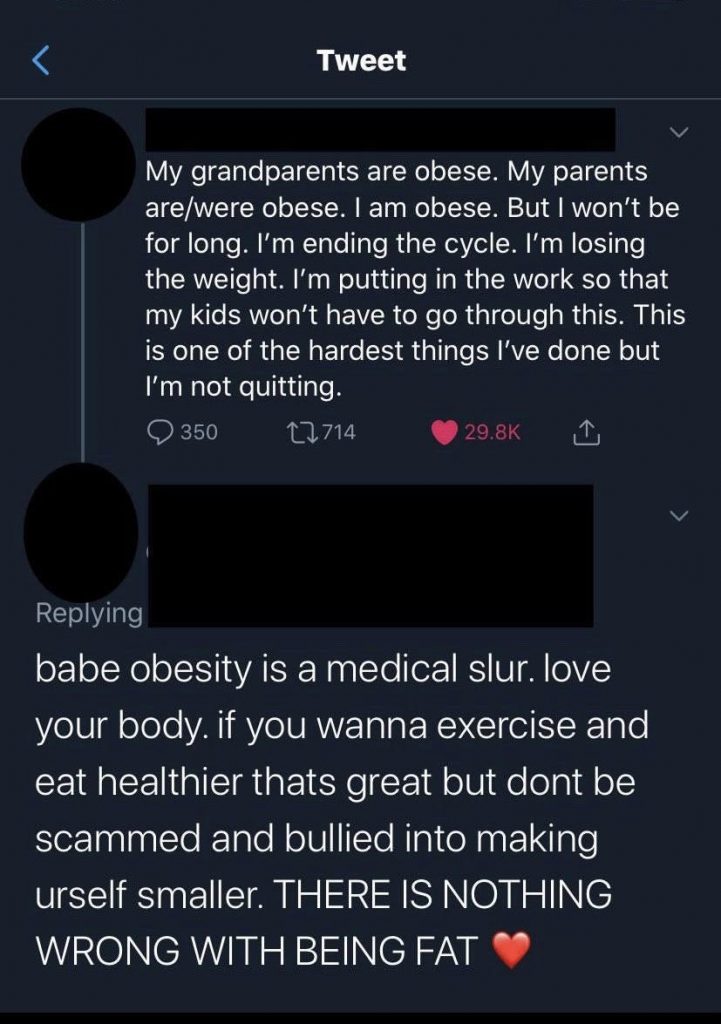 From the movement first beginning in the 1960s to prevent fat-shaming, it has now spiralled and morphed into a blame game social media war. One where we put down women and men for wanting to make lifestyle choices for themselves. This has led to many people distancing themselves from the movement as they feel isolated in the discussion. 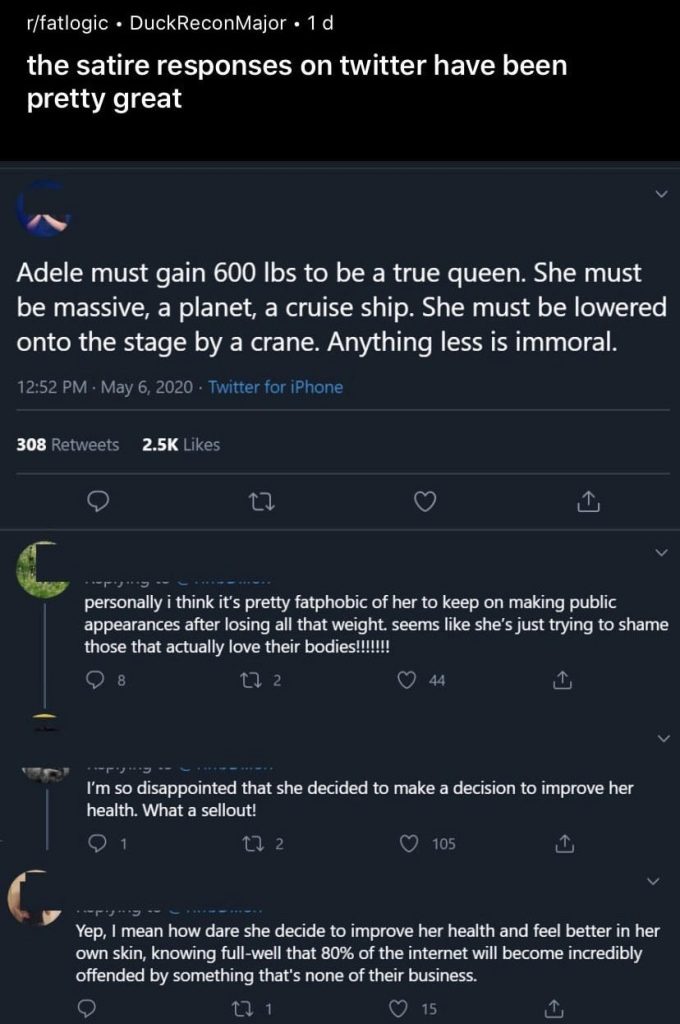 Body positivity does not seem to portray a positive self-image but rather serves to debilitate an us vs them narrative. And toxic thin-fat binaries only exacerbate further division.

Often, this seemingly progressive agenda is commodified and capitalised by brands to improve their image without focusing on social progress. They further contribute to the ‘subversive power’ of entrenched cultural messaging about a woman’s weaknesses.

The lack of inclusivity

The movement also has often failed to promote inclusivity with poster girls for body positivity often being white and traditionally beautiful. They are picture-perfect with pristine skin, no stretch marks, cellulite, stomas and scars that almost all women and girls have. Does this also not promote a warped and unrealistic portrayal of one’s body?

We automatically seem to equate weight loss journey with insecurity and self-hate, rather than appreciate and support for health and fitness. Health and fitness aren’t given a space to co-exist within the movement nowadays. They are seen in opposition to it, rather than an important complement.

Actress and activist Jameel Jamil came under fire for criticising diet cultures beauty norms and expressing her views about the movement as a whole. This because she was supposedly already slim, beautiful, and privileged, therefore, could not have an opinion.

What is our takeaway?

Self-image and body positivity will always be in progress as women face the insurmountable pressure of imposed societal expectations and beauty standards. They are expected to live up to a certain benchmark, no matter what it is.

It is already difficult for young women and girls to navigate the complex world of beauty norms and diet culture. They don’t need to be caught in the crossfire of the toxic and tedious debate. The current debacle showcases a larger symptom of putting women down and equating their worth or identity with the way they look.

Could body-neutrality perhaps, be the next phase of a post- body positivity movement?

Either way, the discussion needs to turn from the shape and size of the body to the emotional and even spiritual factor in making life choices. Choices that help one feel better and stronger in their own skin.

Changing the numbers on the scale does not impact your self-perception much. At the end of the day, you have to live with the darkness of your own thoughts and pent-up emotions.

Sameera Reddy Positively Glows In Late Pregnancy And Shuts Up Trolls Like The Badass She Is!

‘I Refuse To Suck In My Well Earned Belly,’ Says Sona Mohapatra After Being Trolled For Swimsuit Pictures

Five Power Girls Who Are Taking The World By Storm