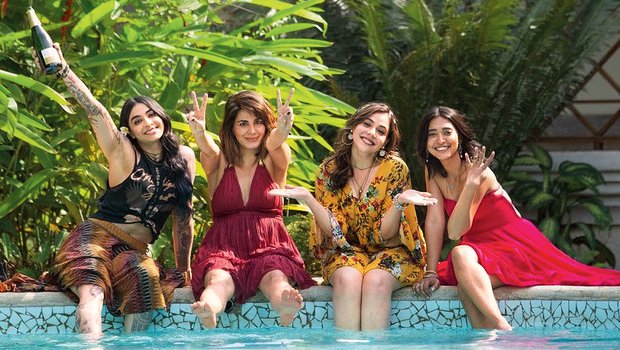 ‘Four More Shots Please’ had its second season release last week. I watched it with high expectations only to find the whole thing immensely disappointing.

In the world of web series, making a second season has almost become a compulsion. However, the issue with this is that the audience’s reaction to the second season may not be the same as the first one. In India, most of the web series have failed to replicate the success of the first season with the second one. All said and done, one cannot deny that excitement that precedes the release of the second season of any show.

In the series disclaimer, where the viewer’s discretion is advised due to alcohol usage, strong language and sex, they should’ve added another clause. I think they should’ve also added that none of these have any relation with feminism of any sort.

It isn’t a part of rebel feminism. And women definitely have other issues than dealing with break ups, weight loss, cheating, toxic relationships and how to use a tampon.

Watching the second season felt like watching the story of first season in a different light. It made me wonder why I wasted my time watching it! The second season picks up where the first one left off. Four months after the ‘Big Fight,’ the four women return to India after making amends in Istanbul. The major events that take place in their lives after their return make the storyline for the next ten episodes.

As for the story, it felt like the production department was under pressure to make the new season. The journey of each of the major character and the underlying message was not clear to me. Milind Soman tried to hold the story together but one single character cannot make ten episodes worthy of watching.

The four lead characters feel repetitive and there are no added layers to their character than the previous season. Bani can’t seem to come out of her ‘Roadies’ zone throughout the series. Kriti plays a convincing role as her character struggles with the issues of divorced working mom’s.

Manvi’s character is pampered in this season just like the first season. She still seems to be struggling with her weight, lack of partner and an unclear understanding of what she wants to do with life. Sayani Gupta’s character is writing a book but her past keeps coming back to haunt her.

Is the definition of feminism skewed?

The storyline did not appeal to me. It made me wonder why feminist independent women are always shown with alcohol, cigarettes and sex. Are these their characteristics?

In any woman’s life- divorce, a cheating partner and same sex relationships are not a burden whose guilt has to be carried throughout her life. It is not necessary to feel guilty about them and use the methods shown in the series to overcome it.

This season carried a lot of expectations thanks to the success of the first season. However, the show failed to meet them. The bold content and women’s free-spirited attitude might make headlines but only disappointed me.

Picture credits: Still from the series

The original piece was published on our Hindi site and can be read here. This piece was translated by Asefa Hafeez

Can We Say That Sisterhoods On Screen Have Finally Come Of Age?

Value Yourself, & 6 Other Lessons I Learnt From The Characters In ‘Four More Shots, Please’!

Why Are All The Men Of Four More Shots, Please Such Infantilised Pseudo Feminists?