My heart wails when I read about ever increasing COVID 19 cases in New York. I can’t see this energetic place become inactive and amble. Get well soon New York!!

I still remember that fall morning, when we decided to visit New York for the first time. New York the name itself has always fascinated me from very beginning. Blame it on my social studies book of Grade 4 when I first saw this enigmatic monument, a lady holding the torch which no doubt is a universal symbol of freedom. Its mesmerizing beauty bowled me over and I made a small wish of visiting it one day as I grow up. A wish that took more than two decades to be fulfilled; I was happy that I was going to visit the busiest city in the world.

“Bigger the city, higher the traffic” this notion definitely holds good for NYC. Both me and my husband being traffic phobic, we decided to park our car in Jersey City, and take a bus ride to New York, which had been on our wish list since long. I think that was the best decision, as the ride was smooth and we enjoyed every bit of it. We got down at Times square, and from there our journey began as we tried to explore the best of the big apple.

Times square is no doubt synonymous with light, people and dazzling vibrancy. Nestled at the junction of Broadway and seventh avenue in Manhattan, Times square is one of the busiest place in Earth. One look, and I was mesmerized with the illuminated bill boards and advertisements that engulfed this bowtie shaped, commercial center from head to toe. Red, blue, green, pink………………not a single color was spared, as these neon boards filled the street with sparkling light that was definitely a visual treat to naked eyes. Though cars and buses ply through the busy streets engulfing this district from both ends, it’s the pedestrian strip that takes the limelight for obvious reasons. People from all races and ethnicity walk past this busy place as if there is no tomorrow. In our quest to explore this famous spot, we roamed through the streets, our eyes glued up and our ears going ga…. ga…. with the sound that was appealing for some reason. Suddenly my son spotted a Spiderman and we were thrilled at the sight of dozen fictional characters who wanted to woo him with their chivalry and charm. Some clicks with them and we were all set to explore two exciting spots of this hotspot which had been on our want list.

Brooklyn Bridge, world’s longest suspension bridge was next on cards. We took a cab and arrived at the bridge which spanned through the borrows of Manhattan and Brooklyn. I could remember Shahrukh khan doing a song sequence in a Karan Johar movie here. It was fun crossing the bridge as people seemed to walk at their highest speed and you need to buck up to match up to them. My naughty duo was excited looking at the view of Manhattan from the top of the bridge.

It was almost going to be evening and we thought of completing the 9/11 memorial, a place of remembrance and honor. I literally got goose bumps as I could recollect the ghastly incident that took place back in 2001. The north and south pool parapets on the memorial, included the names of the victims who were killed in that deadly attack, which shook the world. Though my elder one was aware of the plaza’s importance my younger one was not, hence I was bombarded with tons of questions…………..

“What is this known for Mom?”

“It’s a place where we remember heroes of past” …………..Though he made face, he seemed satisfied with my answer.

By the time we were done with this, it was dark and we rushed to board a bus that would drop us near Jersey City. All through, I kept wondering about this magical city which seemed to have impressed me on my very first visit itself. New York in itself is so huge that it’s difficult to finish the sightseeing of the same in one go. Staying in New jersey had its benefits as every alternate week, we would travel to New York and explore its glorious heritage. Statue of liberty, Central park, Broadway theatre……………each of these unique places baffled us to the core and we couldn’t control our joy of visiting this beautiful place, which undoubtedly is the cultural capital of this world.

Today it is Silent

Today this lovely city is silent…

My heart wails when I read about ever increasing COVID 19 cases in New York . With number of confirmed cases running into Lakhs, New York has become the epicenter of this global outbreak. It’s difficult to see Times square wear a deserted look, a place which was bustling with people, now stands as a mute spectator to this ongoing chaos. I can’t see this energetic place become inactive and amble. 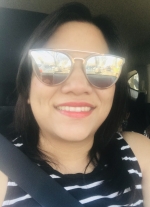 A former Banking and SAP professional, I love scribbling my thoughts. Mother to two boys,