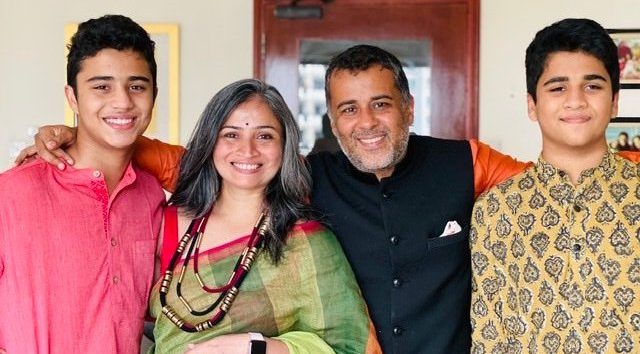 The way Chetan Bhagat portrays his female characters is something I like. I think it increases his appeal further. Here are 5 things men can learn from him.

Today, I won’t be talking about women, instead I will talk about men. Quite often, men list out the qualities they want in their ideal woman. They want this woman to be a career woman who loves to cook. She has to be someone who will love his parents like her own, even if they don’t treat her well.

Such are the expectations men have from their ‘ideal’ women. However, there is an author whom I respect a lot, thanks to his portrayal of women. Chetan Bhagat is an author who gives an equal status to all the women he writes about in the truest sense of the word.

So here are a few things I wish men would learn from Chetan Bhagat.

Accept a woman as she is!

In the Indian society, the first condition to marry a girl is that she HAS TO be a virgin, the guy can be a big flirt. The girl has to have great culinary skill while managing a ‘successful’ career too. For most men, girlfriends are not the same as the wives. A girlfriend is for fun but ‘a wife is for life.’

However, Chetan Bhagat’s female characters are always independent, smart women who propose boldly, take the initiative to kiss or make love to their partner. He has shown them to be as human as the men. These women are sweet, innocent and caring but also very bold.

Even the way he portrayed his wife, it was with the same boldness. He has been one person who has always supported and accepted women with all their virtues and vices.

I wish men learnt that from him.

Support a woman as she supports the man

A woman cooking for her husband, doing the laundry, taking care of the kids and the house is considered normal. However, if a man does any of that, he is literally looked at as god.

The woman is told to count her blessings for she has such a ‘loving and caring’ husband. A woman’s sacrifices are her duties but a man doing any of it is glorified.

I believe Chetan Bhagat was one of the first few authors who brought attention to these inequalities. He clearly states that a man is as responsible for household duties as a woman. And while his wife works, he is a proud stay-at-home husband.

Worship your mom but understand your wife too

Almost every boy, especially in India, epitomises his mom as the ‘ideal woman’ and expects his wife to be her carbon copy. He feels indebted to his mom for everything he is.

Even when she does something he doesn’t like, he wouldn’t tell her simply because she will be hurt by it. He thinks his mom is the world’s most loving and caring woman who loves everyone everywhere. The man thinks, ‘My mum loves me and similarly loves my wife too. She is the best MIL anyone can ever get.’

I believe, this is the perception of almost every man in India. It’s true, isn’t it? Do mothers have the same feelings for their sons and daughters-in-law? Again, I don’t think so! If that were true, even a little true, the earth would have been literal heaven for women.

Moreover the man who worships his mother, does he ever think about his wife’s feelings too? I don’t think so. However, Chetan Bhagat differs here once again. He managed to understand how his mother tried to emotionally blackmail him into not marrying his love.

Moreover, he stood up for his wife when his mother insulted her by asking her to cook lots of food despite knowing that she scored better than him. She even went on to humiliate the girl’s family and claimed they had ‘trapped’ her son.

Instead of hiding all these under the garb of a mother’s ‘love,’ Chetan Bhagat showed it how it was. I wish common men who adulate their moms could differentiate between the wrong and love.

Women aren’t made only for cooking!

In India, cooking is given great importance. As an Indian girl, you need to learn, no, you need to LOVE cooking. You may be a working woman but you have to be a skilled cook and make yummy food for your family, daily.

If you cannot cook, you aren’t woman enough. A guy who cooks, he does so because of his choice but girls aren’t given that choice. For them, cooking is mandatory. If you don’t know how to cook or if you don’t cook, you are a lazy lady, who cannot take care of her family.

In his recent non-fiction work, Chetan Bhagat urges all men not to marry ‘hot phulka makers.’ He urged men to marry someone who would be their partner, will be an equal to them and give meaning and shape to their lives.

I do hope men learn from his advice.

Being a divorcee, or a victim of violence doesn’t make her less of a person

The female protagonist in his latest novel is a victim of childhood abuse at the hands of her own father. She is from an elite family and is married to a rich guy. However, after her marriage, she is a victim of domestic violence and divorces her husband.

A guy from her college has been in love with her since then and she meets him post her divorce. She finds out that he still does love her, despite knowing her past. He says he knows and loves the girl who used to be his best friend. She still has the clear head and ‘pure’ heart.

Just like the character, why can’t men also love the woman for the qualities she possesses, I ask? Stop judging women by their past- relationships or anything else!

To sum up, I wish all men could develop a good understanding of women’s feelings like Chetan Bhagat and give them their due respect. A woman sacrifices her everything to make a man’s life and this fact shouldn’t be ignored by anyone.

Her value doesn’t depend on how great a cook she is or how chaste her body has been. The true value of women depends on their dedication and care with which they take care of you and your family. Respect them for that. Each one is unique. Don’t compare them with others.