Are We Raising Our Sons To Understand The Dreams Of Tomorrow’s Empowered Women?

The theme for International Women’s Day 2020 is #EachforEqual meaning, each one of us can do our bit to challenge stereotypes, stand up against bias and champion potential to create a world where everyone is equal regardless of their gender.

As we usher in a new decade, are you wondering what you as a parent can do, to embed gender equality in the current generation of children?

Here are three things to do differently to promote a gender equal world, for change begins at home starting with small actions.

It’s a well-known fact that women take on three times more caregiving including parenting and domestic work than men, which leaves them with a lot less time to spend on their careers or any other activity of their choice including taking care of their health. One way to address this is share the load responsibly, equally as well as acknowledge the value of household work.

Although most of us would like to believe chores have no gender, most of us are often guilty of assigning household chores by gender without thinking about it, especially with our children. How often have you seen daughters being the first ones to help with the cooking, setting the table, doing the laundry, and sons helping in the garden, fixing the bulbs or running errands to buy things?

Chores are basic survival skills everyone needs to learn, instead of being a way to draw out the gender lines. A good way is to have a roster for chores so everyone gets adept at tackling them.

How many times have you automatically reached to buy dolls for girls and cars for boys? Did it ever cross your mind that your son might want to play with a toy tea set because he enjoys watching you bake? Or that your girl would rather play with a model airplane because she loved meeting the pilot on your last flight?

You won’t know what your child is really interested in, if the option is not presented to them in the first place. It could make for a limited worldview re-enforcing the stereotype, and we are here to break them remember! So as long as it’s the choice your children make, and not one that is enforced upon them it is a great choice.

The same goes for experiences. Would you rather embrace an adventure activity with your son – for example play football and instead dance or plan a barbecue with your daughter? If instead, we engage girls in sports right from the beginning, specially those not traditionally seen as ladylike, it would boost her confidence to be on those teams. And in the strength of her body and not just for her “beauty”.

Thanks to the focus on women’s empowerment we now have loads of women role model for our girls to be inspired from in every field. The question to ask ourselves is, are we raising our sons to complement empowered women?

Across the world, hugely successful women are still seen by their children as the primary care givers. While we do expose our daughters to women achievers, supporting them through each opportunity in chasing their dream careers, are we doing enough to help our sons understand that the women in their lives have other passions outside of the family and how they can support them to achieve those dreams? Don’t you think role models for children are better placed being gender agonistic and based solely on championing their potential?

So, what will you do differently this #IWD2020 to support the theme #EachforEqual? 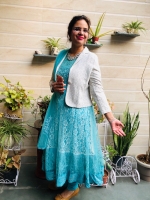