How often have we heard that women are not safe in India? That they need to be ‘protected’? This is exactly what it means to be a woman in India today.

Today morning, I woke up to multiple messages related to International ‘Women’s Day. 25 percent off on groceries!’ ’10 percent discount on flowers!’ ‘No making charges on diamond jewellery,’ among others.

And in that moment, I realised that the March Madness had begun. Until three years ago, March Madness for me, usually began with a gentle reminder from my reporting authority in the banking sector. Or with an aggressive message from the Boss. They would both remind me that after the end of the financial year, there would be an appraisal process to keep my blood pressure and stress levels high.

Is this all there is to Women’s Day?

As a writer, now, the reasons for stress and frustration have shifted reasons but they have not shifted loyalties like my account’s financial statement. Today, a different kind of seething anger gripped my soul. I wanted to question each of these brands and ask them if that is all Women’s Day meant to them.

And yet, all their propositions felt better than any of the headlines, I’ve woken up to in the past few months- violence, morale policing and gender stereotyping. In a bid to highlight the daily struggles we face as women, I decided to take everyone through the stages of being a female in this country.

Stage one- the birth

Since you are girl, you don’t get to be born. You are aborted in your mother’s womb, itself. In case, you do manage to make your way to the world, you are either dumped in a dustbin or choked to death. Because what are girls, if not unwanted responsibilities?

If you end up staying alive, one of your relatives/acquaintances might consider you an object of lust and rape you. Doesn’t matter if you are a five-month-old infant, an eight-year-old child or a teen. As long as you have a vagina, men consider it normal to force themselves on you scarring you for life or killing you.

If you still manage to escape all that are alive and fortunate to be born in a family that values education, there are other things you will face. You will be groped, molested, teased or even rape on your way to school/college/tuitions by anyone. There even are chances of being shot at or have acid thrown at you.

Stage two- an attempt at independence

If you are lucky to have survived all the above mentioned odd and attain financial independence and a job, you’re still not safe! There will be creepy bosses, abusive colleagues, stalker clients, among other who will hinder your strategy to break the glass ceiling.

But what’s more, is that you still stand to be murdered, molested, have acid thrown at you or worse, raped.

Just because you’re financially independent doesn’t mean, you’re good enough! What is the point of your existence if there’s no man to validate you and your existence with sindoor and a mangalsutra.

You are displayed like an item on a showcase for sale, and you get picked up like a piece of meat. And your family has to pay the buyer!

Well, you’re married and now your family considers you their free maid. You also come with extra income and they reward you with physical, mental and emotional abuse. Your husband may lead by example or merely stand as a mute spectator.

And because you made out of steel, you continue to fight against every kind of bias at home and at work. You struggle to justify your existence to the world. At the same time, you also experience mind boggling circumstance of powerful men giving gyaan on what you should do during your periods or how the breast milk is different for girls and boys.

You also have women in power telling you how sacrificing individual careers for their spouse is something to be proud of. It is not enough that you are also schooled on your attire, behavior, and choices. Any effort you make to shatter gender stereotyping are smashed by the voices around you. These are the more privileged voices that have a platform to be heard.

Moving on, you embrace motherhood and not always because you want to. Now you are expected to give up your aspirations and identity because bringing up the child is only your responsibility.

There will still be a section of the society that will smirk at you for abandoning your ambition and choosing to stay at home. Then again, getting judged for whatever you do, has already become a part of life now.

In case you fail to become a mother, your barren womb becomes a source of pity, mockery, and abuse. It is insignificant as to who has the fertility issue between the spouses because it is always the fault of a woman.

If you give birth to a son, suddenly the onus of change falls on your shoulder. Random people will shove their opinion down your throat about how boys must be brought up with empathy and sensitivity in this era. It is inconsequential that they would believe in the slogan of ‘men will be men’ when it comes to their own.

If you have a daughter, you start with facing pity or wrath from people around you. Now it is time for you to go back to stage one because her life cycle begins exactly where it began for you.

Maybe you survived all the stages and reached the old-age. But now, your children will probably consider you to be a burden and dump you in an old-age home. Or worse, leave you at the railway station. If you have, accidentally, been a non-conformist woman, you will definitely find yourself as a lonely senior citizen.

In case, you can relate to one or more of the above mentioned stages, welcome to the club of being a woman in India.

And still we fight…

But we are in 2020. We talk about gender rights and equality, about ‘taboos’ like menstruation and try to normalise breastfeeding. Everywhere we go- whether at home or in the society or even at work, we fight against bias and discrimination.

For every step we take towards progress, one the above stages takes us back two paces. In this regressive world, very soon, our fight will be the one for the struggle to exist. The fight right now is not just against patriarchy, it is also for those who choose to stay quiet about it and become passive supporters.

But, we aren’t going to give up. The more you try repressing our voices, the louder we will get. For every unwarranted advice to be sanskaari, our unsanskaari avatar will challenge your archaic thoughts.

We have, for ages and across generations, fought for ourselves and no matter how much fear you instil in us, remember, we will rise. Like the phoenix from the ashes, we will rise. 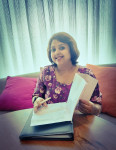 Dear Rashmi… That’s How All Of Them Begin. But I’m A Woman All Year, Not Just Today!