“People ask me the benefit of my work or what do I get out of it,” says Alka Gujnal, a single woman army who works to get sex workers of Budhwarpeth in Pune, their dignity as human beings.

Poverty, patriarchy, gender discrimination, domestic unrest – Alka Gujnal has braved many a storm. Yet, nothing could stop her from working for the rights of destitute sex workers. A brave crusader championing their cause, she has been working tirelessly to bring dignity to their lives.

“People ask me the benefit of my work or what do I get out of it. I just know that a sex worker is also a woman and she should get her due respect. Difficult circumstances push a sex worker to take this as a business, but that should not deprive her of her dignity,” she says. “My fight is against the stigmas, discrimination, and inhuman ostracization against these women.”

The theme for International Women’s Day 2020 #IWD2020 is #EachForEqual. The spirit of sisterhood, in which women help other women rise up to equal, help them towards a better life, using whatever privilege they have.

Budhwar Peth is one of the busiest places in the old city of Pune, famous for its electronic shopping during the day. At night, it is bustling with sex seekers haggling with sex workers for cheap and easy sex.  Commercial sex workers are hired here for anywhere between Rs 100 to a few thousand.

Alka Gujnal was born and brought up in this red-light area. Watching these women charm potential customers in their bright clothes and loud makeup did confuse her while growing up. The sexual advances of the visitors and words “rate kya legi”(what is your rate) or “chalti hai kya” (will you come) baffled her until she could make sense of her neighbourhood.

Since the past twenty years now, Alka has been working tirelessly to help these destitute women to get them a life of dignity. Fondly called Alka Tai by everyone, she spoke to me about her life and work in this heart-warming conversation –

“Budhwar Peth red light area starts from my place. Every day around 20-30 sex workers stand here. No one wants to join the business of prostitution, but poverty and difficult circumstances force them,” shares Alka. “Due to extreme poverty, our family couldn’t leave Budhwar Peth area. Many times, people have looked at me with the wrong intention. I have scolded them and even hit them. But I can’t escape this while living in this red-light area.”

When her ancestors came to Budhwar Peth many years ago and made it their home, the area wasn’t yet a red-light area. Alka grew up in a very low-income family where patriarchy and gender discrimination ruled the mindsets. With an alcoholic father, domestic violence was the norm of the day.

“In our family girls aren’t educated but seeing things at home and around I had made up my mind that I will not leave my education, come what may,” she says.

The first girl in her family across generations who got educated, Alka Gujnal is the eldest of three siblings. With two younger brothers, her education was the last on her alcoholic father’s priorities, who even tore and burnt her books, but she didn’t stop. At the age of 15, her father tried to get her married to a relative who was more than ten years elder to her, but she resisted fiercely. “After that my father has never spoken to me properly, since many years,” she muses.

Coming face to face with a harsh reality

Alka Gujnal recalls an incident when she was in class 11. She had become close friends with a young sex worker staying in the next-door brothel. She remembers her as a very good looking, charming and soft-spoken girl. However, soon her friend was left on the road to fend for herself, when she was diagnosed with HIV.

“No one even offered her water. She was left alone on the road. When she died, no one was ready to perform her last rites and left her alone, just because of her sickness. That was very wrong,” she sighs.

Alka was shocked to see such inhuman behaviour of society. That incident shook her to the core, and she resolved to help these marginalized women.

And Alka Gujnal kept her promise

It wasn’t easy. The impact of that turning point in her life was immense. Since then, she has ensured to duly perform the last rites of every single sex worker when there hasn’t been anyone to take responsibility.

She had had to face a lot of resistance from society, especially her family, who were worried about the “disgrace” her work could bring them, and that she may “get diseases” from these sex workers. However, Alka was determined. She studied hard, took up various jobs to take care of her education as well as her family.

Today, a post-graduate in social work, Alka Gujnal works for PMC (Pune Municipal Corporation) along with pursuing her calling of helping these women in all possible ways, taking care of them during all kinds of sickness, sending them to rehabilitation centres, and being with them for hours during a delivery.

Using the medium of role plays and rallies, Alka has created awareness on AIDS/HIV. Through her efforts, she has built a network of more than 200 sex workers who get together periodically to discuss issues and ideate on solutions. She has raised awareness in the community about health, financial matters, as well as basic rights. By making sure that all the pertinent paperwork is intact, she helps them avail various welfare schemes.

She shares, “I counsel them regularly. If a sex worker wants to get out of the business of prostitution, then I help them to work for opportunities like beautician, jewellery,  paan shop, work at NGOs, and the community learning centre.”

I ask her if she has ever faced any threat from the nexus that usually operates in red-light areas. To which she answers an emphatic NO. “There is a trust that people have in me. I can scold them. Because I was born and brought up here and have been working for their welfare, I have earned certain respect,” she smiles.

Getting the authorities on board

Alka Gujnal is a force to reckon with in her area, a single woman army.

I ask her how she manages all this. She shares, “I have made sure of an excellent relationship with police, NGOs working for various causes like health, children’s education, community-based paperwork like Aadhar/voters etc., HIV/Condom distribution. I am always in conversation with them. I ensure that we all work in a team. I have made a good rapport with all the stakeholders, and thus everyone supports me for the cause.” 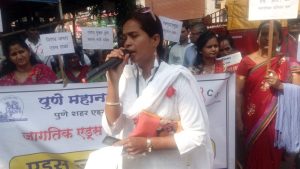 Recently, she organized a rally for AIDS/HIV awareness, where she invited NGOs and other stakeholders, which was a success.

“There was a sex worker who entrusted the responsibility of her children to me,” says Alka. “I am taking care of her two children so that they don’t follow this path of prostitution.” 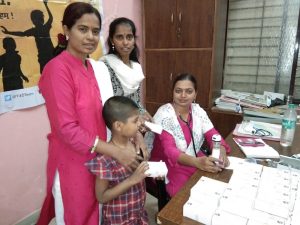 Alka has enrolled several children of these sex workers at school. During the night when their mothers work, she holds counselling sessions for children. Earlier, her home was a night creche for these children. Now due to an increase in the number, she has liaised with an NGO. She has also been teaching these children their rights, as well as about good and bad touch. Her engagement with the children of sex workers has made many children return to school.

Due to her exemplary efforts, she was recently felicitated at the Plan India Impact Awards 2019 as an outstanding community volunteer. I ask her if more hands have joined her.

She shares, “When I started working, no one supported. In fact, everyone opposed because of the stigma. Now there is a trust and openness towards my work. But still, people don’t come forward that much. Also, since I am not paying out someone, I cannot ask people to extend support during odd hours.”

This is especially if any of the women she is currently looking after is sick. “No one touches the dead body of sex worker didi who was sick/had HIV,” she says.

Empathy for a fellow woman keeps her going

Amidst difficult financial circumstances and family responsibilities, what keeps her going are her honest intentions and determination to make a change to the lives of these women. Alka shares, “I am a woman, and I can empathize. That’s why I feel for every bit of respect and dignity which they deserve. People feel that she is dead why to think about her. But why should she go alone in the end? They are also a part of society and should be treated well.”

She adds, “My father gave me a very tough time. He always opposed my education. Because of that, I became all the more determined not to leave my studies. Whenever someone praises my work, I feel grateful to my father. I am fortunate to have got my mother’s back always. And now, so much love and gratitude from the community keeps me going.”