Why must men be the only ones proposing to women? In the 21st century with women taking charge, here are six women who made the first move and proposed!

Why must men be the only ones proposing to women? In the 21st century with women taking charge, here are six women who made the first move and proposed!

The word ‘proposal’ will always bring to mind a man going down on one knee surrounded by roses as his lady love stands and is in tears while nodding and saying, ‘yes!’

But that’s a thing of the past, we live in the 21st century. We have women asking their boyfriends out/proposing to their husbands!

Keeping the spirit of Valentine’s day alive, we asked our Insta fam if they made the first move.

And here are few of the best responses. 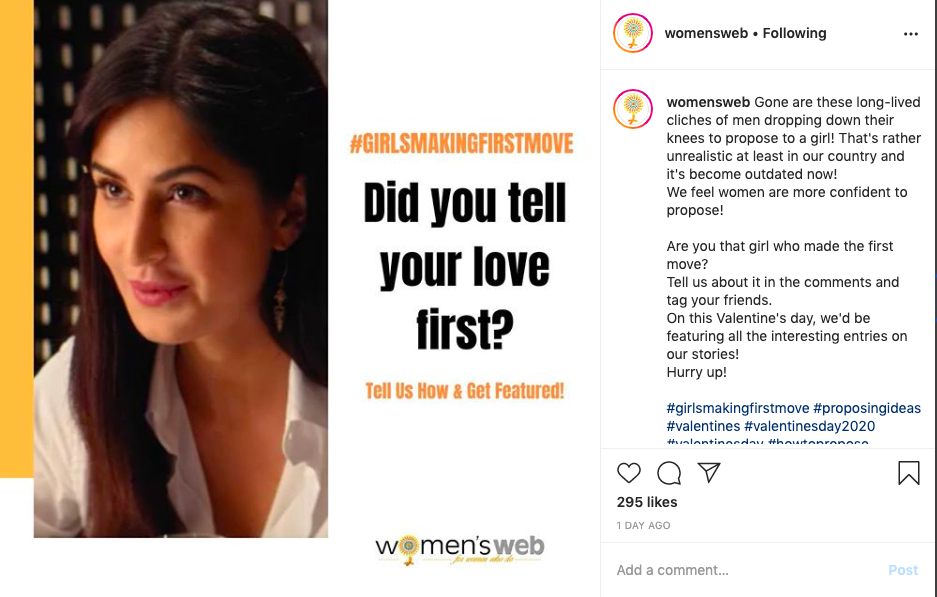 Priyanka Mandal told us how she proposed to her boyfriend of seven years on Facebook! She says she found him extremely well-mannered and respectful of women and she thought for a day before asking him out. “It is also true; I gave him a chance to propose to me first but then I felt he was not courageous enough. And yes, I did it. Well, I was lucky enough that my choice wasn’t wrong, and, in a few months, it will be seven long years of togetherness!”

One move, one move is all it takes!

An Instagram user called @kolamsanmandalas spoke of how 13 years ago, she had a crush a guy for as long as four years! And right before he was leaving the city forever, she made her move. Turns out the guy was scared out of his wits to make the move despite having a crush on her forever! “He never asked me out as he was scared the friendship we had would end. He accepted when I proposed to him! We started our long-distance relationship with expensive phone calls and messages. Six years of dating and technological advances later, I called him my husband on July 14th, 2013. I call him the best decision of my life. He is extremely proud of me for making the first move.”

Arranged marriage, but I chose him

If you think proposals are only for love marriages, think again, for Richa Jindal has a story that will restore your faith in the magic of arranged marriages. She met her husband in a typical traditional set-up where the parents hovered around as she and her husband chatted for a while. He said yes, so it had to be a yes, while she hated the idea of an arranged marriage. Despite her dislike of the arranged marriage, she didn’t really voice her opinion and their courtship period was full of arguments and fights. Fifteen days before she was to be wed, she finally gathered the courage to speak to her parents against getting married, but their emotional blackmail won and with doubt in her mind, she got married. It took her a while to understand him and though he’d always say ‘I love you’ to her and she’d repeat it, it was devoid of emotions. He never really proposed to her. That idea was alien to him.

Seven years into their marriage, they were at a party where the husband had to propose to the wife as he had before the marriage. “I looked at him and he shrugged, meaning, I cannot do all these cheesy things. The seven years with him passed in a flash before my eyes; the way he put all my needs before his, the way he always helped me with the kids, understands my passions, and yes, all those silent gestures expressing love and affection. An instant clicked and I went down on my knees and proposed to him, saying a hearty ‘I love you!’ So, seven years later, after two kids, I took the chance and proposed to him. My first real proposal, my first real love, my moment of love.”

She took efforts though it didn’t last

Sometimes the love may not last, but the girl at least took efforts, didn’t she? So here’s Shweta who met her ex-boyfriend at a wedding and decided to give it a shot, because why not! Clearly a believer of love at first sight, she saw him and was smitten by him. She made up an excuse to go to his city and made sure he knew. “My gal pals and I pooled in some money to get me there and that’s how I met him the second time. Thought it wasn’t a forever kind of love, I think I have always gone after what I want!” The love may not have lasted but the girl went for it and isn’t that all we are about?

It may not always succeed but you tried!

There are times when you go for something and are rejected but that doesn’t really mean it was wrong, does it? We have a few stories of women who were rejected but didn’t lose hope and moved on in life.

An Instagram user by the name of @life_as_booked said she proposed to a guy she had a crushed on but was rejected. Though a bunch of women agreed with her, she was also applauded for making the first move and asking her guy out! Another user @paathoo_tty has a slightly bitter-sweet story. Seven years ago, she had a crush on someone- a crush that still makes her feel sparkly and special. Though she was initially rejected, he accepted her proposal. But unfortunately, it was not to be. She seems happy with her life and what even is the point of keeping feelings to yourself?

So, my dear women, this Valentine’s day, if you have a crush, go tell him/her about it and make the first move! Who knows you might just find your one true love!