Which One Of The Two Was Her Real Birth Mother?

Kunal Basu’s Sarojini’s Mother looks at the search for a birth mother by an adoptee, a literal puzzle that needs to be solved.

Sarojini “Saz” Campbell is on a quest to find her birth mother. The only clue available to her is the name of the city she had been adopted from – Calcutta. Assisting her along the way is an Elvis Presley lookalike, Chiru Sen, with his band (true in the musical sense too) of friends.

The search, whether conducted through physical enquiries or online enquiries, quickly puts forth two candidates – Jamuna, who resides in a slum dwelling with two other sons, and Urvasi, who lives amidst the richest of the society. Both women lost/sent away a daughter twenty seven years ago, about the same time Saz was adopted.

The book does not dwell on anything for long. It faces the problems that arise and resolves them quickly, which I found to be a good thing. It helps move the story along at an engaging pace. On top of that, the descriptions of places, of crowds, of sceneries, of emptiness, they transport the reader to the exact spot, to those grounds the characters are visiting or reminiscing. Even the scents, the noises, the textures engaged the senses.

Narrated by the Elvis lookalike, Sarojini’s Mother, much like its title, is about mothers, and how different their emotions, their affections can be. But it’s not just Saz’s potential mothers that we meet and get to understand. There is also Chiru’s mother, who is described only through the son’s point of view and his memories for much of the first half, and who we get to know better when things change. 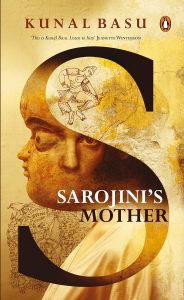 The characters, especially Chiru’s friends, did not have much space to grow in. Sometimes, it felt like I had stumbled across a book part of a bigger series and had somehow missed details of the characters; other times, those same names felt overly familiar, part of the cogs that ran the story.

Little bits and pieces of trivia about the characters, while fun to read, became inconsequential in the overall scheme of the story. For instance, unless someone explicitly addressed him as ‘Elvis’, I could not remember the fact that the narrator loved The King so much that he had stylized himself after his idol. But it was his identity, and I found it odd to only stumble across it every now and then.

Overall, Sarojini’s Mother is an easy afternoon read, flush with vivid descriptions. It is a story rooted in faith and trust, which in turn root and guide the actions of the characters in the story. When it all winds down to the last page, it could not have been done better. It brought the book to a fitting conclusion.

If you would like to pick up a copy of Sarojini’s Mother by Kunal Basu, use our affiliate links at Amazon India, and at Amazon US.

The Unknown Face Of My Mother