Taapsee Pannu was compared to Ayushmann Khurrana by a producer after she women the Best Actress award, recently. It's 2020, let women have their own benchmarks!

Taapsee Pannu was compared to Ayushmann Khurrana by a producer after she women the Best Actress award, recently. It’s 2020, let women have their own benchmarks!

Taapsee Pannu recently won the Best Actress (Critics) Award at the Amazon Filmfare Awards 2020 for her performance in Saand ki Aankh. Her Twitter was flooded with congratulatory messages for her monumental.

Not the one to stand back and listen to such comments, Taapsee gave Garg a powerful response, calling him out on his comment and tweeted, “What about calling me Bollywood ki pehli Taapsee Pannu.” 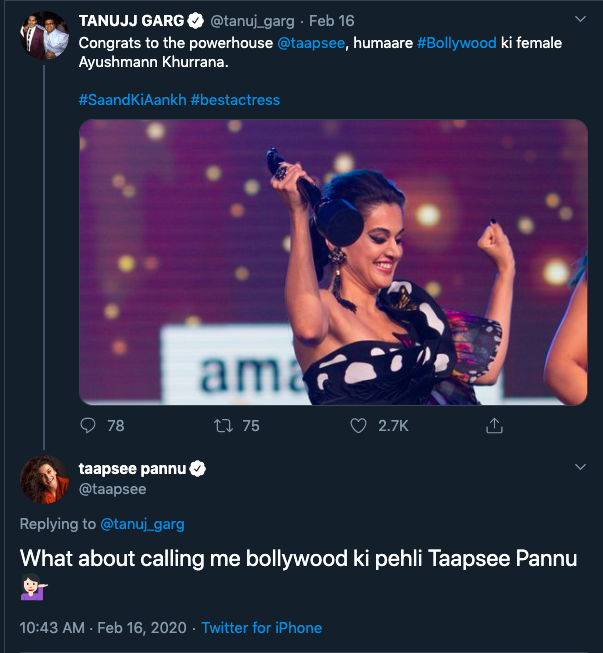 Women rarely have their own benchmarks

Earlier, in an interview with Indian Express, she shed more light on the episode. She said Garg had good intentions and was in no way demeaning her or her work. However, she also said that as women, we are constantly seen through the male benchmarks. And this is to the point that whenever something like this happens, we have our antennas up.

Often, women have to work harder to be at par with the benchmarks set by men. And if they fail to reach the standard, they are termed a ‘failure’ or a someone who ‘didn’t work enough.’ While transparent, this benchmark is present and controls the lives of the female actors who are working really hard to make themselves be seen.

The gender gap is something else!

Apart from these subtle and on-the-surface incident, there is a huge gap between the kind of work female and male actors are given. There is a clear disparity between the number of male and female singers, the screen time actors are given and the dialogues they have. And let’s not even talk about the pay gap here!

The roles men are often given show them as the one who possesses qualities that highlight their strength, merit and their character. At the same time, women are normally given roles that only highlight their appearance, emotional vulnerability and ‘instincts.’

Women are finally speaking up

But women have finally taken the reins and are speaking up about the disparity. The recent incident with Taapsee Pannu is one of the many where women called out such nonsensical behaviour.

Yet another person who called out this behaviour was Priyanka Chopra. She spoke about the discrimination in the film industry. And called out the sexist mentality of the audiences who do not take female actors seriously and merely view them as ornaments.

The ever-so vocal Kangana Ranaut has often been compared to the male actors and called names for her strong views. Swara Bhasker has also quite often found herself in the middle of controversies. One of them being where trolls took her tweets out of context and constructed a whole new narrative. Being one of the strongest voices of feminism in Bollywood, she gave the trolls what they deserved.

I do see some hope

However, in the last few years, female-centric films seem to be changing this scenario. We see women being given more versatile roles that are real and do not reinforce the typical ‘damsel-in-distress’ or manic pixie dream girl stereotype. These roles are the very real ones that the everyday women can relate to.

This gives me some hope for change in the sexist industry.