The first look of the upcoming short film, Devi, dropped recently. With an ensemble cast of talented actors such as Kajol, Neena Kulkarni, Mukta Barve and others, and a plot that promises a look into gender-based violence, it looks like a cracker of a watch!

The first look of the upcoming short film, Devi, dropped recently. With an ensemble cast of talented actors such as Kajol, Neena Kulkarni, Mukta Barve and others, and a plot that promises a look into gender-based violence, it looks like a cracker of a watch!

Directed by debutant director, Priyanka Bannerjee, it has been produced by Electric Apples Entertainment for Large Short Films. Juice, starring Shefali Shah and directed by Neeraj Ghaywan; and Ahalya, starring Radhika Apte and directed by Sujoy Ghosh, for Large Short Films, had gone massively viral in past years for their feminist messages. From the first look of Devi, one can make a reasonable prediction that it too will find similar fame.

The image, shared by Bollywood trade analyst Taran Adarsh features the nine actresses positioned around a couch. It has been reported that, “Devi is the story of nine oppressed women, from different strata of society, living a small room, faced with the dilemma of sharing their space and stories in a country all too used to tragedy and pain.” 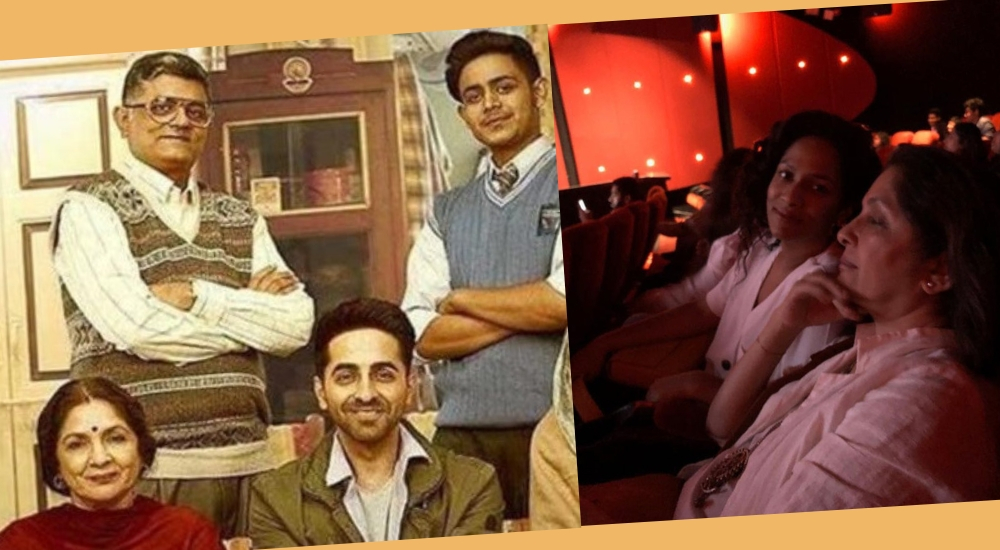 With A Fond Insta Post, Masaba Gupta Is All Praise For Mom Neena In ‘Badhaai Ho’

All the actors have had high praise for the movie.

Kajol said, “It’s a poignant film, one that needs to be shared with the world, especially today. In today’s times when gender discrimination, abuse and violence is being spoken about vociferously, films like Devi are far more relevant and I am glad to have got the opportunity to participate.” She also spoke about her character in the movie, named Jyoti. “My character, Jyoti, is vastly different from me, but uncannily, we share a lot of similarities.”

Shruti Hassan highlighted the portrayal of sisterhood in the film. “We often talk about sisterhood and how women need to stand with each other. Devi highlights that aspect in such a lovely way, with such a powerful message.”

For Neha Dhupia, the things that really stayed with her long after the shoot, are “the amazing women who worked on the project, and without revealing much I’d have to say the ending.”

Neena Kulkarni praised the “moving and layered script,” and Mukta Barve spoke about the plot, saying, “All the women in this story have suffered violence, irrespective of their social class, regardless of their ages. By shining a light on it, the film says that violence cannot be accepted as a norm.”

Kajol had also shared a BTS shot from the movie on her insta, captioning it, “Bts of Devi … thank u @ashesinwind and @ryanivanstephen for making me a part of this statement.. some things need to be seen to be understood on a deeper level.”

It is still quite rare to see so many talented women on screen together, and in a film about an important and socially relevant topic. Needless to say, we are excitedly waiting for Devi to come to our screens!

Recently I saw Anuradha, directed by Hrishikesh Mukherjee. It stars Leela Naidu, (who, as per the late director Satyajit Ray was a classic beauty) Balraj Sahni, and Abhi Bhattacharya. The film was way ahead of its times.