Shaguna had dreamt about the shrine again. The dream was the same, never even a slight variation in its details; always vivid and clear, even though so many years had passed. It was 4:30 A.M, her usual time of waking up. She made her tea and looked at her calendar for the week. She had a busy week ahead, with many events and speeches planned, and she began working on her laptop which her daughter had gifted her a few weeks back on her 50th birthday. There was a mail informing her that Sakhi, the organisation she had founded after leaving her job in a corporate firm and nurtured and fostered for more than two decades now, had been nominated for a prestigious award, and she felt proud. How far she had come, from the day she first visited the shrine, to now, she thought….

It had been a new job after they had moved to Delhi following Alok’s transfer. She had been unable to complete the last semester of her course and had been lucky to find a job. She had gone to the village for an article for the weekly magazine she worked in.

The village was small but beautiful. There was something idyllic about it, peaceful and serene. It was more than scenic beauty though, more of a calmness that resonated within. The houses were small, identical, in neat rows, with no fences or borders. Some houses had women going about their chores, some had children playing, some had groups of women talking and even dancing. Actually it seemed something like a kibbutz, a form of community living she had read about. There was a small café, with a few women sipping their coffee, listening to music or reading the newspaper. A small library in a corner, an art gallery and computer centre, next to the grocery store in another made the place complete and, she supposed, self sufficient.

After having stopped to take some pictures, she decided to speak to some of the women. The women she met were all ordinary people, some worked for a living, a few were studying, some were waiting to move to other cities, living their lives with the usual challenges but they seemed to be happy and content. They spoke about themselves, but very little about any other people in their lives, and, strangely, that didn’t seem to leave a void.

There was something in their demeanor that drew her to them, and she tried to learn more about. Most had been forthcoming about themselves and their lives, but she was drawn to a young girl, Tanya, who sat quietly in the library. She introduced herself and tried to ask Tanya about herself, but was met with very little response. She sensed that Tanya didn’t want to speak much and asked if she would show her around. As they set out from the library, she asked Tanya if all the women who lived here were alone.

Tanya laughed, “Alone, aren’t we all? Or, actually, is anyone really alone?”

“You mean, where are the men? “ Tanya asked. Shaguna had been taken aback as Tanya had read her mind.

“Come with me”, Tanya led her to a garden a short distance away.

The garden was breathtakingly beautiful, with flowers of every possible colour, and fruit laden trees. The centre of the garden was home to a white building, circular in shape, with an ivory white dome, a shrine of some sorts, she thought. For some reason, it made her uncomfortable. She wasn’t a terribly religious person, and had hardly any time or patience even for rituals. She hesitated and suggested they go back. But Tanya was already inside and she had no choice but to follow her.

She was surprised to find that Tanya didn’t take her shoes off. There was no idol either; just a large hall, with its walls white and a glass dome, open to the blue, clear sky. It was actually a large study, with a mirror covering one wall almost entirely, with some books, and a large desk. She realized Tanya had stepped back and was leaving. A little uncomfortable, she had tried to follow, but Tanya had sat her down on the couch near the table, and left her saying “The person who needs to know your story the most is You”.

She was confused, but decided to explore the place, as it would give her good material for the story. She went to the table, and saw her reflection in the mirror. She was startled to realise she could hardly recognise herself. “Must be the journey and the fatigue” she thought and scanned the shelf for books, but the reflection had seemed to continue to stare at her.  Slightly unnerved, she picked up a book which was kept on the large mahogany table.

It was a huge notebook, leather bound, with the silhouette of a woman on the cover. The woman had red hair, and the background was ash grey. She flipped through it to find pages of hand written text; each page with the name of a woman on top and, what could only be her story, beneath.

Tara who had left her manipulative husband, Rita who had been abandoned because she couldn’t bear her partner a child, Sana whose son had left her penniless. She realised there were still blank pages, and her hands had taken her to the first blank page, right after Jasmine who had escaped her husband trying to smother her as she slept, tired from his attempts at marital rape.

She now realised these were the stories of the women she had seen and met, or of those, who had been here in the past. The women had found the courage to voice their stories, had found themselves and in themselves found peace.

The calm of the environment had come from this peace. There was no noise or conflict as the women had begun to heal. The women would come to the village, stay till they found themselves and their inner strength, to heal, to breath, till they felt  complete, whole in themselves; neither defined nor defiled by the men, or their past. They would take the time and space needed to replenish themselves, to become their previous robust selves rather than pale shadows. It would surely be a unique narrative for the magazine.

The shrine, that was making her uncomfortable, was not a religious or even spiritual place; it was a shrine to the self. To one’s true self, deep within; the beautiful, authentic self that could only be found by finding courage and faith, perhaps in equal measure.

She looked again at the blank page and suddenly shivered. Would she have the courage to fill it with her name and the strength to embrace the peace that would take her towards herself? She closed the book and saw the back cover which read:

“Out of the ash
I rise with my red hair
And I eat men like air.”

The woman on the cover with red hair seemed to call her, to remind herself to look within, rise from the ashes, like a fire, red and intense. The inscription at the back of the book made her believe that her tormentors could finally have justice meted to them, if she had the courage to fill the book with her name and story.

Hands trembling, she had begun to write. Even she couldn’t read the spirals on the page initially, but the words, like her thoughts, became clearer as she continued. And, when she had filled her page, she realized that she had emptied herself of the burden, and could think clearly. After decades, she felt light and knew what to do. She believed she had been destined to be there, to read the book, to tell her story, and to allow her own self to listen to it.

That was how she had walked out of the shrine, feeling emboldened and empowered, to speak about the abuse that she had been through, the trauma that had made her the person she was today; had changed her so much that she couldn’t even recognise her own reflection.

She had returned from the village with resolve matching the peace that she had briefly experienced. It was here that she had first allowed herself to speak about it to herself; to identify the need for it to end. The baby steps towards building a new life, one free of pain, shame and torment began there. The decision that had begun from the notebook had finally ended in the court where she had finally mustered the courage to leave her husband and abusive marriage of 5 years. Having been abused by her step father all her life, she had seemed to attract more abuse and also normalise her suffering. In fact, a part of her seemed to need it, so dependent she had become.

It hadn’t been easy, but she had persisted and then, suddenly, it hadn’t been difficult either. She had completed her studies in social work and found a job to support herself and Sakshi, her daughter. With support from family and friends, she had later started Sakhi to empower women trapped in abusive marriages.

She was forever thankful for the opportune visit, a godsend in many ways when she had been asked to write about the village by the magazine she was working for. Maybe the universe did conspire to give you what you needed, when you were ready to revive? Maybe that’s why she had found herself in the shrine, looking at the blank pages?

All these years later, she would begin many of her motivational speeches with the words “The person who needs to know your story the most is You”.

Many times, she had thought of telling the story of how it all started for her, the village and the shrine and Tanya, but she had tried forgotten the name of the place. Even an internet search had not thrown up any matches. Maybe, because it was well before the time of the internet; or perhaps the universe knew that the right dream was enough to awaken you, if you were ready for it?

Editor’s note: This story had been shortlisted for the November 2019 Muse of the Month contest. 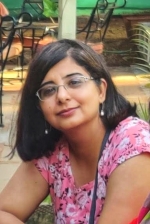 Shalini grows through her roles as mother and a doctor. She believes that both the

When Leaps Of Faith Become Leaps Of Strength

Speak Up Ma! You Can’t Give Up Without A Fight For All You Have Achieved