The first winner of our December 2019 Muse of the Month contest is Anjali Paul.

Radha chechi had been working as the sweeper in Birchwood apartments for the past 10 years now. Her husband Santosh was one of the security guards at the same complex. Birchwood apartments was a 14 storied building with duplex styled apartments. They were all custom made as per the requirements of the owner. Each apartment was worth more than 2 crores and was owned by the affluent and moneyed people of Kochi.

This sea facing property with its landscaped lawns, infinity pool, offered top notch amenities like a squash and tennis court, urban park, children’s play area and even a 30 seater mini theatre. Every nook and corner of this building screamed opulence.

Radha chechi began her work at 8.00 am every morning. Initially when eight standard pass Radha had started working at this apartment complex, she was awestruck by the grandeur and magnificence of the building. But with time she got used to it. Terms like lobby, couch, marble and health faucet  quickly became part of her vocabulary. She also knew who lived in which flat, the names of the cars they owned- Mercedes, Benz, Porsche, what time each member of the family left, who was having an affair with whose wife. Radha chechi’s stock of gossip never got over. Being the oldest and the one who had started working right since the complex was built, she was called Radha chechi by the other staff.

Every morning, Radha chechi reached Birchwood apartments at 7.30am sharp. Her long black hair would be well oiled and plaited. This was again tied into a bun and held in place with a whole lot of clips. Being neat and well-groomed was very important to Radha. Around the bun she had wrapped around a single string of jasmine flowers that Santosh had gotten her from the market early in the morning. She blushed a scarlet red as she remembered Santosh adorning her hair with the flowers. The way he buried his head deep into her hair and inhaled the intoxicating smell, of coconut oil and jasmine flowers gave her goosebumps even now. Fifty year old Radha was in love again.

Santosh was her second husband. Her first husband Raghu was the biggest mistake of her life. ‘That bloody drunkard beat me up every single day, thank God he is out of my life now’, thought Radha. Just then the lift doors opened and Radha got into it to go to the fourteenth floor. Inside the lift she saw Meera madam. Tall and slender Meera madam always made Radha feel like a midget. She wished her a courteous, “Good morning madam”. To which Meera replied with a grunt and nod. Radha got the message and didn’t indulge in any further conversation like she did with the others.

Meera madam was always like that. Such a big snob. Always considered it beneath her dignity to talk to people like us, thought Radha. The only thing Radha liked about Meera was that she was always fully clothed. Never seen her like those other ladies wearing skimpy outfits. “Just goes to show that you can look good even with all your clothes on,” muttered Radha as she cleaned the corridors on each floor. “But Meera madam’s Saar is a good man. He always speaks nicely to me. Always interested in the building gossip. I wonder what makes this woman so sullen all the time,” Radha kept muttering to herself.

Just then she heard a loud thud followed by loud screams from inside one of the houses. On listening closely Radha realized that the screaming and shouting was coming out of Meera madam’s house. ‘What’s happening inside?’ wondered Radha Chechi. She could hear Meera madam’s voice, crying and saying something. It was all in English and Radha couldn’t make out a thing.

The door suddenly opened and Saar barged out of the house. Radha stood behind one of the pillars so that he wouldn’t see her and think she was eavesdropping. She saw Meera madam coming to close the door. She was wearing a sleeveless gown unlike her usual well stitched, full sleeved kurta and churidhar. Radha saw marks all over her hands and legs. Like someone had whipped her with a belt. Her face now stripped off all the makeup had scars. She even a black eye which was must have always been hidden behind her sunglasses.

Radha knew what all those scars indicated only too well. It’s the same everywhere thought Radha. Even with all this money and riches, their life is far from perfect. That Saar is a monster just like Raghu. Radha was deep in thought as she reached the ground floor.

It was lunch time. All the housekeeping staff and security except one who stayed at the main gate had their lunch together. Radha couldn’t keep the story to herself for too long and spilt it all out. Every one listened to her in rapt attention and were astonished to hear how badly Meera madam was thrashed.

“She deserves it,” one of them quipped. “Such an arrogant lady she is.”

Radha’s eyes blazed on hearing this. “No one deserves this,” she said with a ferocity that surprised everyone. “We all must try and help her.”

“Why should we?” said the others. “We will just end up losing our jobs if we meddle in all the big people’s affairs.”

“Just leave it,” said one of the other security guards.

After lunch, Radha caught hold of Santosh and told him she had a plan. “We can help Meera madam,” she said excitedly.

“What can we do Radha?” asked Santosh puzzled.

“Whenever we hear any sound like that of hitting and shouting from their house, one of us will ring the doorbell and ask something. It can be anything, like what is the time? Or is water coming? I have heard that this works. When you interrupt domestic violence, they will realize that they can be heard and others know what’s happening inside.” Santosh looked at Radha doubtfully, but on seeing her enthusiasm he just couldn’t say no. After all he knew exactly what Radha went through for 7 years of her life.

Next day at the same time, Radha started cleaning the corridors. Santosh came earlier than usual to put their plan in action. But they heard nothing. This continued for a week and then one fine day, Radha heard the same noises emanating from Meera Madam’s house. She called Santosh immediately, who handed over his charge to another guard and rushed to the fourteenth floor.

“Nothing sir, just wanted to know whether water is coming, as the tankers have come for those houses which have water shortage.”

“Yes it’s coming,” Saar said. “I just washed my hands,” he said in a calmer voice on seeing Radha also standing right there.

“Ok sir,” said Santosh and looked at Saar pointedly. His fear seemed to have vanished suddenly. He could see that his presence had disturbed Saar and he was definitely looking embarrassed now. “If you feel the water supply has stopped, just tell Radha, she will be outside only,” he continued. Saar nodded and closed the door behind him.

Next day when Radha saw Meera madam and Saar in the lift, she wished them a loud good morning like always, but this time Saab didn’t even look at her. Instead Meera madam smiled at her and wished her. Radha gave her a sparkling smile in return.

Author’s note: Bell Bajao (Hindi for ‘ring the bell’) is an anti-domestic violence campaign that urges local residents to take a stand against physical abuse through simple acts meant to interrupt domestic violence. When residents, especially men, overhear violence against a woman taking place, they are urged to ring the doorbell and ask a simple question – such as to borrow some tea leaves, to use the phone, or to have a glass of water. This is meant to let the abuser know that others can hear them and will act to interrupt the violence.- Wikipedia

Image source: a still from the movie Udaharanam Sujatha 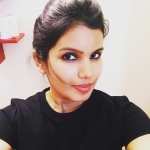 I am a mom who works from home and dabbles with writing when time permits.

Coming Back For The Miracle Of Life