Cab Cab Ki Kahaani – Because The Roads Don’t Belong To Your Father!

Have you ever had a cab driver drive so rashly that you wanted to slap him in the face? Or yell at him? The writer goes through the same. Read to know what she did!

I have come to that stage of life where Fridays and Mondays feel like a pair of twins. There is always work to do, deadlines to meet, excel sheets to be filled, reports to be submitted, mails to be read, mails to be answered and notes to be written to ‘self.’ All this, so that Monday doesn’t feel like first day of job at a new workplace. That was exactly how yesterday ended.

I treated myself to a little cab ride back home because only someone who takes 45 minutes to reach 4 kilometres understands what a luxury that is! That too on a delightfully young Friday evening. We moved slow (ketchup-sloooooowww) snaking through the traffic, disgracing the follow-one-lane rule when a friend called up to chat. ‘Perfect,’ I thought! That’s all I needed.

As I sank back in the backseat of the car with a lazy sigh and crossed my leg in the sheer comfort of having nothing to worry about- there it was! He jumped the red signal with a sharp right turn leading my phone to fly up in the air and half of me thrown on the left side with a jerk. The stunt was managed to escape the approaching wave of drivers with revving engines and blood-thirsty accelerators. Once safe on the other side of the street, I glanced back to only imagine what could have been… had we missed a second there.

Involuntarily, I screamed at him fright and anger fizzing out of me. I pointed the rules and consequences of breaking them, trying to bring some sense in his mind. Waiting for a response for a full minute, I realise he has not heard a word of my protest because he’s got a set of earplugs on and is busy on a call. I screamed louder this time and this driver simply goes, “Yea I know, there’s nothing to worry about.”

The next thing I know he’s trying to run over people and honking incessantly even when the road is absolutely clear. On yet another signal he stopped (by God’s grace) but far ahead of the zebra line.

I gritted my teeth and congratulated him for being considerate enough to leave the zebra crossing for pedestrians. Then I also suggested that we might as well go since we had already broken on traffic rule. We were now an obstacle for all the drivers who wanted to go that way. However, we continued to halt in the middle of the road like cattle left unattended. But at least, they are productive!

We still had a long way to go but my patience was running out due to the rash driving. I don’t even drive this rash in video games but this guy was in some kind of competition with other unknown drivers.

And I knew I wanted to punch him in the face when he went point blank in the direction of a helpless street dog. The dog was lucky it survived by an inch, but for me it was too much to take.

That was the last straw and I got out

On my demand, the cab came to an abrupt halt, its tyres screeching in protest. I thanked him for the memorable 20 minute drive and got down even though I was nowhere near home. He looked resentful and hurt like a lover dumped by a partner. And asked several questions while begging me to come back. However, his voice faded away as I continued to walk home.

I could have written a feedback on the app or I caught the traffic police’s attention and complained. Or I could have rated him with one star. I could also have raised my voice showing anger, which I did. But just refusing and boycotting such services felt like the right thing to do.

I hope he is clever enough to understand the ‘what’ and ‘why’ of the situation. And I hope that he will be kind to the next passengers and care for everyone on the road, humans and animals alike.

Lastly, I hope that he doesn’t miss out on the things he did. And instead warns his fellow cab drivers of a crazy screaming girl who walked out in the middle of nowhere! 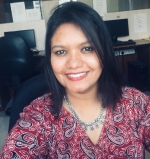 I write because basically I can't paint as vividly as I would like to.

That Day Gave Me Some Haunting Memories Of Street Harassment, AND Two Friends

What Did Maya Want – Makeup For ‘Looking Groomed’, Or For Her Own Feel Good Factor?