A recent video going all over viral on social media show security staff of St Francis College for Women, Hyderabad, tugging at the Kurtis of students if the kurta was not below the knee.

A recent video going all over viral on social media show security staff of St Francis College for Women, Hyderabad, tugging at the Kurtis of students if the kurta was not below the knee.

Remember St. Francis College For Women Hyderabad, the college with the Kurti issue?

Moral policing has not stopped at St. Francis College for Women Hyderabad. At the end of July, the college issued a bizarre circular making it mandatory for all students to wear Kurtis that touch the knee or are longer, from August 1.

When asked why by the students, the management replied by saying things (as alleged by students) like – wearing knee-length kurta will result for a girl to “get good marriage proposals” and wearing short tops garners “unnecessary male attention from the staff”.

On last Friday, the matter blew up, about which a video from the college went viral on social media. 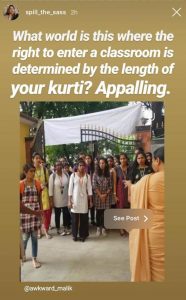 In this video posted on Instagram by Awkard Malik, we can see how multiple students were halted at the gates of the institute because their Kurti was an inch above their knees. We can also see that this led to a fight with the newly appointed security guard. Apart from that, it is also seen that the security guard badly treated the parents who were complaining and in the end, the Principal is seen ‘sorting’ out the students based on the length of their Kurti.

“According to me education has nothing to do with the type of clothes I wear, let it be a Kurta, shorts or a bikini nobody can tell me what to wear and how to wear it. I know there are people who say having rules in schools or colleges is normal, I agree that in some business colleges the students have to wear formals but standing at the gate like Hitler and screening the girls is not the right way to treat anyone or even hiring lady guards who are clearly crossing the line by touching and shouting on the girls.” Posted Vrinda Malik (Awkward Malik) an ex-student on her Instagram.

A student from the college told us – “I was in a full-length Kurti on Friday, still because of the line through which the security guard who was sorting out people, I missed my first hour.”

In a report on these developments in The News Minute, a lot of students also expressed their problem with how the security guard was treating them and how the Principal allowed all of that.

“People are getting angrier by the minute. We didn’t want anyone to touch us. Now, the management is okay with these people behaving with us the way they are. And they believe it’s okay because it’s a woman and not a male security guard, so they can do that,” alleges Ramya.

Many celebrities and influencers including Sonam Kapoor have shared this issue and raised their concern.

The students are doing a peaceful protest today, on 16th September, outside the college, which is on currently as you read this, while the college management has yet not responded on the entire issue.

The students protesting at St Francis College for Women have won the day.

8.30 AM: Students gathered in a peaceful protest outside the college gates, holding placards and shouting slogans. They did not block any movement in and out of the college gates, letting everyone, including cars, a free passage.

10.30 AM: Student representatives called inside by the Principal for a discussion. The protest was still on, with slogans being shouted and the crowds swelling.

12.30: The Principal came out and agreed to the demands, The management has now agreed that students need to only abide by the rules that they had agreed to while taking admission – that is, long top to be worn, without showing skin. But no more mandatory knee length kurti.

Editor’s note: As told to our writer by a student of St. Francis College for Women, Hyderabad.