Dear Men, Don’t Put Your Mother On A Pedestal; She’s A Woman Too!

Do parents cease to be humans, once they have children? Do their desires, aspirations and expectations as individuals disappear?

Why do Indian children particularly boys have problems accepting their mothers as a ‘woman’?

I recently watched ‘Once Again’ on Netflix. A movie about a mature romance.

It’s a story of two souls who try to fill their voids by conversing through lonely nights.

Shefali Shah with her expressive eyes and Neeraj Kabi with a romantic restraint bring forth the sensuality of two individuals trying to overcome years of loneliness.

They are looking for a connection, a bond which a death and a divorce have deprived them of. They could have spent the coming years conversing in body and thought.

Is that wrong or right?

The millennials in India for all their aping of the western lifestyles, gizmos and food trends, refuse to accept parents as individuals. Men and women who could, would, and should have physical and emotional desires.

Humans as a species express themselves sexually, besides physically and verbally.

The female lead Tara’s son reacts with an insensitivity that is cruel to the core; to make a responsible adult feel guilty for their desire to be having a matured, adult relationship!

What society, children and families forget is that at a later age, the need and desire for company is much more. They have time and a lifetime to share.

The movie ends with a clandestine meeting on vacations between two as Tara’s married son refuses to acknowledge the ‘woman’ in his mother.

The movie sends the message that the lead couple found a way to meet their emotional and physical desires, but did not challenge their children who don’t want to follow conventions themselves, but enforce it on the parents.

A disappointing end, losing out on a really good and inspiring story.

Image source: a still from the movie Once Again 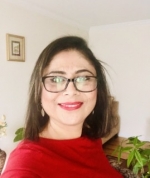 A licensed psychotherapist/counselor, writer and an avid gardener. Swati believes that for the inner

The Virus Taught Me That I Don’t ‘Own’ My Children, They Have Dreams Of Their Own!