For me Nadia is beautiful, her story is extraordinary, she is brave, she is inspirational. Her voice needs to be heard by every person on this earth.

The room was filled with presence of a woman with confidence, security, authority, beauty, and boldness.

Silence filled the auditorium as everyone watched this mighty woman share her truths that utterly shocked every woman on the globe. She wasn’t scared to speak boldly. She spoke with the confidence of someone who knew that her source of information was as true as truth can be. She possessed the secret we all desperately long for – Bravery!

The woman I speak about has found the secret to becoming a truly bold and brave woman – for me this is being beautiful. She is Nadia Murad, who went from being a rape survivor in Iraq to Nobel Peace Prize winner.

Nadia Murad is an Iraqi Yazidi who was tortured and raped by Islamic State militants, and she has become the face of a campaign to free Yazidis. She is the first Iraqi to win the Nobel Peace Prize, and is campaigning to help put an end to human trafficking and calling on the world to take a tougher line on rape as a weapon of war.

Sex slave to the ISIS

In 2014, she was captured and endured 3 months as a sex slave at the hands of the militants after they swept through Northern Iraq where she lived. After being captured, she was taken by force to Mosul where she was forced to convert to Islam and sold repeatedly for sex as part of slave trade. She suffered forced marriages, beatings and gang-rapes before she was able to escape.

Writing in her memoir, The Last Girl: My Story of Captivity, and My Fight Against the Islamic State, in 2017, she (in her own words) described how the sexual violence began the moment she got on the bus, as one militant reached out to grope her breast.

“It felt like fire. I had never been touched like that before – my tears fell on his hand, but still he didn’t stop”, she wrote. “At some point, there was rape and nothing else. This becomes your normal day.”

A captured woman becomes a spoil of war if she is caught trying to escape. She would be put in a cell and raped by all the men in the compound. This is what happened to Nadia, who says the militants called this practice “sexual jihad”. After this one can never think of trying to escape again.

The man she was staying with in Mosul was going to ‘sell’ her again to someone else. Nadia managed to leave the compound and stopped at a house to ask for help. The Muslim family had no connection with ISIS and helped her to escape. She managed to cross into Iraqi Kurdistan and found refuge in camps with other Yazidis. She later reached Europe and now lives in Germany.

She started to campaign for the thousands of women who are still believed to be held captive by ISIS. It was the first time a survivor of atrocities was awarded the distinction.

For me Nadia is beautiful, her story is extraordinary, she is brave, she is inspirational. Her voice needs to be heard by every person on this earth. Deciding to be honest has been one of the hardest decisions for Nadia and also equally important, which makes her very special and unique for me.

At Switzerland at a UN forum on minority issues, she took the initiative and turned bold enough to tell her story in front of a large audience. She talked about everything – the children who died of dehydration, fleeing ISIS, the families still stranded on the mountain, the thousands of women and children who remained in captivity, and how men are massacred. She was one of hundreds of thousands of Yazidi victims from a scattered community of refugees living inside and outside of Iraq. There was and there is so much the world needs to hear about what is happening to Yazidis.

She opened up on the sexual harassment she faced. She spoke about Hajji Salman – the ‘judge’ at Mosul and the times he raped her, and all the abuse she witnessed.

I feel it never gets easier to tell your story, a story so full of heart break and agonies. The nightmare of been raped and beaten repeatedly. It takes a lot of guts; each time you speak about the horror, you get to relive it. Nadia’s beauty lies in the guts she has where she talked about the checkpoint where the men raped her or the feeling of Hajji Salman’s whip across the blanket as she laid under it, or the dark Mosul sky where she searched the neighbourhood for some help. No doubt she gets transported back to those moments and all the terror, each time she tells her story.

Her story, told honestly and matter-of-factly, is the best weapon she has against terrorism, which she plans to use until those terrorists are put on trial. There is still so much that needs to be done. World leaders, especially Muslim religious leaders need to stand up to protect the oppressed.

It is difficult for a rape victim to come out from the darkness to tell her story. Nadia proved to be different. She was surely not raised to give speeches and lectures, but life made her an inspiration, a help to other Yazidis who want ISIS to be prosecuted for genocide. She wants to be the last girl in the world with a story like hers.

Instead of walking to Nadia and many more like her- ‘comparing and despairing’, or feeling sympathetic towards such victims, I feel we should instead grab each other’s hands and celebrate being alive, celebrate being bold, celebrate being brave, and most important, celebrate standing up to face the world after such harsh atrocities, and pledge to ourselves that “I’ll walk where my own nature would be leading; It vexes me to choose another guide:”

I know it is hard. But you, Nadia, you are brave and beautiful. Just as you should be. Despite all the mess and chaos in life, every woman is beautiful. You are, I am, and so is everyone.

No comparing, no more criticising, no more having someone else as guides, make our own path, walk boldly, only cheering, encouraging and supporting each other who are weak and who need to be taken care of.

Stay vulnerable. Be genuine. Give your stripped boldness a chance to sparkle brilliantly. In doing as such, you help other people who see trust and hope in you. This is being brave, this is true beauty.

Love and Motivation to all.

Editor’s note: This story was shortlisted for the August 2019 Muse of the Month contest. We are honoured to publish it, even though it wasn’t one of the winners. 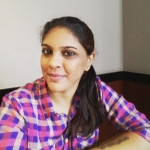 Writer-Blogger-Editor-Author-Poetess-Columnist–Reader You may love or hate me, but ignoring

Why Are There So few Women Nobel Prize Winners In Pure Sciences & Economics?