Despite Shifting 3 Schools In A Year, My 5 y.o. Made Me Proud At Her PTA Meeting

I am more concerned about how my child handles social situations and relationships, and her progress at school in this, instead of just her academics.

I am more concerned about how my child handles social situations and relationships, and her progress at school in this, instead of just her academics.

As a child who tip-toed around academics at school, a PTA (Parent-Teacher Association) meeting send chills of terror down my spine. It was a judgement day for me, which resulted in pure disappointment for my creators and the people who were making an effort to mould my future, the teachers.

I loathed that day with all my heart. People often say, “How I wish to be a child again.” Well, I don’t!

My mother would always look at the left side of the report card, at my academic scores. Worried about my academics, I would ask her, “Mummy, why don’t you look at the right side of the report card – I have all A(s) and B(s) there. Why only the left? Why only the numbers? Why don’t you check out the ratings I scored under social habits, personality traits, and expression charts?”

She never responded but her face said it all those times, “Because it doesn’t matter till you score well academically.”

I attended my daughter Mysha’s first-ever PTA today, in India. Her classroom greeted me with serenity and nostalgia. The smell of books, the alignment of wooden chairs and tables, the crisp cotton saree adorning her class-teacher, all felt familiar yet old hat.

Decades back I was the one in question; somehow, I was still a question today. I am extremely confident now, after the PTM is over, but then I felt twice as answerable, as a parent and as a child. I speak for both, as she is a part of me.

But then, today, there was a change! As I sat on a tiny wooden chair where I was handed a white crisp report card with my daughter’s name on the top, I did what I promised myself years back.

Years later, today, when I opened that card with the numbers and the ratings, I made the right move (as per me) and went straight to the right side of that card. Mysha had aced all skills ever designed for a child’s all-round development, and that was so rewarding for me. I was a proud Mommy.

Of course, I peeked at the left side of the report card after that, too. She needs those numbers and good for her, she aced there as well. While she had perfect scores in Maths and English, written Hindi needs improvement.

Adapting to a new environment

Well, she has been raised in Hyderabad and Melbourne and written Hindi was not a part of her syllabus in either of the two cities, but she managed to pull 21/50 with whatever she has learnt in the last 1.5 months.

Due to a family emergency, we are putting up in Kanpur for the last three months now. As I did not want her to miss out the routine of going to school, I got her enrolled in a school here.

The institute was kind enough to register her mid-term and Mysha, being who she is, adapted quickly. Her biggest strength is acclimatization to the different environments, thrown at her by her guardians. In the last one year, she has been a part of three different schools, three different curriculums. The subjects and the modus operandi provided by her teachers might have changed, but there is one feedback which I persistently receive about her, which even stood out for her today:

“Mysha helps other children. If she is done with her work, she will help others. She likes being surrounded and being resourceful.”

After this note, nothing else mattered to me. No numbers, no grading. Why it’s so important? Because I chose to have a single child but I was scared of the single-child syndrome.

‘They’ said she won’t learn to share. She will be self-centred, maladjusted, spoilt. But I kept my faith in her and my upbringing, and here she is – being much more than I ever desired.

In a world where people often bank on experience, I believe in the experiment.

I often ask Mysha what she wants to be, and she has the same answer every single time, “Main apne Mummy-Papa aur Myrah ki dekh-bhaal karna chahti hoon.” (I want to look after my Mummy-Papa and Myrah). She is five and she wants to nurture her three years younger cousin sister. That’s who she is – a nurturer. 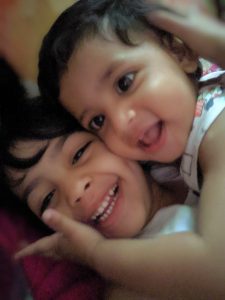 I don’t know what the future has in hold for her. I know it won’t be easy for her to sustain in the future world. She has to be a lot tougher and prepared, and I know I will not be there for her every time. But as of today, I am at peace. Baaki, “sochna kya, jo bhi hoga dekha jayega.” (Que Sera Sera, What will be will be!)

The moment I stepped out of her school, however, I called my husband Shahzeel and said, “Guess what? Ladki Hindi mein paas ho gayi. 20 se upar aaye hai 50 mein.” (The girl has passed her Hindi tests, with a 20-plus out of 50).

The sloth students in us laughed our hearts out.