What happens when a young widow embarks on a journey to satisfy herself? Nathicharami as a movie explores exactly that and comes out with flying colours!

What happens when a young widow embarks on a journey to satisfy herself? Nathicharami as a movie explores exactly that and comes out with flying colours!

Nathicharami recently won 5 national awards including that for the Best Kannada Film at the 66th Annual National Awards. The film revolves around the life of a young widow, Gowri, played by Shruthi Hariharan.

Gowri loses her husband, Mahesh, three years ago, in an accident and after all the time, he is still an integral part of her life.

The magazine Mahesh was reading before his death still lies on the coffee table and cushions on the couch are arranged the way Mahesh would do it.

Her evening ritual involves placing lilies in front of Mahesh’s photo frame. They are the same lilies every day. Maybe there is a history of love behind lilies. Just like there is a story behind the wind chimes that hang all around the house.

One of the few moments in the movie, where we see some excitement in Gowri’s tone is when she explains the significance of these wind chimes to a guest. 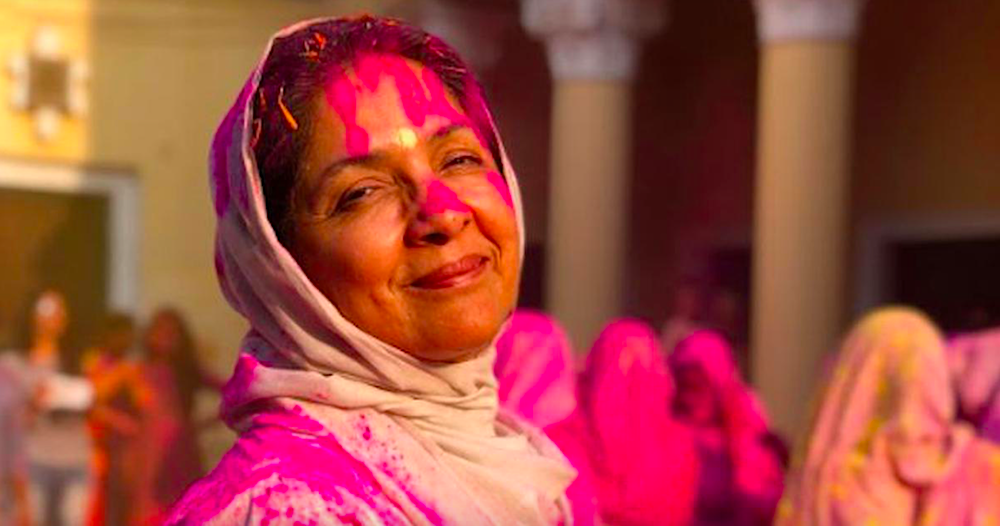 Each of them was bought to signify an important event in their five-year-old married life and have dates affixed on them, such as their anniversaries, a trip to Paris etc., These wind-chimes are an integral part of the movie, and their sounds are used quite evocatively throughout the film.

Not the usual problems that widows are shown to face…

Gowri doesn’t face the common problems that widows are shown to face in movies. She has a comfortable job, she doesn’t have a child to take care of and she doesn’t feel the need of love or companionship in her life. The memories of Mahesh keep her fulfilled.

Gowri faces an unusual dilemma where she is torn between the love and loyalty she feels for dead husband and her carnal desires. For those who follow Tamil Cinema, you might recollect a similar track dealt briefly in Karthik Subbaraj’s 2016 Tamil film, Iraivi where a female artist indulges in empty affairs cause she is unable to get over her dead lover.

Nathicharami further dwells on the subject and deals with it much more expansively and in all its nuances.

When Gowri’s body needs lead to chronic insomnia and distraction at her work place, she decides to meet a counsellor. Her counsellor brings in an interesting analogy to help her resolve her confusion.

He explains to her as to how sex is similar to food; while we add various flavours to our cooking to make the raw food meet our conditioned tastes, the basic instinct of hunger doesn’t need these tastes to be quenched. He advises her not to neglect her biological needs for the lofty ideals of love and moral propriety.

Gowri’s struggles with her sexuality and her regular counselling sessions land her with a slightly revised take on monogamy. She begins opening up to the idea of casual sex, while staying emotionally committed to her dead husband.

While she knows her family and society would prefer her to marry again to find sex, this goes against her beliefs and convictions. She is okay to have sex without love but not marriage for just sex.

According to Gowri, marriage should be about love and companionship. The movie throws an interesting insight on the hypocritical standards of the society, where even marital rapes are overlooked but a woman’s consensual sex outside marriage is looked down upon with contempt and disdain.

She doesn’t mind the fact that he is married. All she is looking for is a person, who doesn’t expect an emotional commitment from her while treating her with decency.

None of the characters in Nathicharami are depicted in black and white. While our heart goes out to Shruthi’s predicament, we can’t help finding her a bit inconsiderate and disregardful of the feelings of men whom she wants to sleep with.

A date whom she brings home to have sex with after explaining all the rules of what she is looking for leaves her telling that, “it is not just women who do not want to be used.”

At the same time, there is a clear distinction brought in between the integrity and decency of her approach in seeking casual sex from men of her choice to the approach employed by her male co-workers with her.

While Gowri seeks the consent of her potential sexual partners for a mutually respecting equation, her co-worker Rishi treats her with a cheap presumption that she should be available to sleep with anyone who offers her sex because she is a widow. Gowri returns his indecent proposition with an explosive comeback which explains Gowri’s character a little further.

She might not be looking for love in sex, but she would not let her agency of choosing her sexual partners to be treated lightly.

However, there are certain things about the film, I didn’t not quite understand. Why would an empowered and culturally refined woman like Gowri befriend a shallow self-absorbed douche bag like Suresh with outdated values? Did she not have the need to respect her sexual partner, even if not love? Or did she want to purposefully look for someone whom she wouldn’t get attached to? The movie doesn’t bring out these aspects clearly.

Shruti Hariharan, who received a mention during the national awards, wins our hearts with her subtle yet moving performance of a woman who is willing to risk humiliation for sex but would not get it under the garb of love or marriage.

Sanchari Vijay who earlier won the national award for best actor for Naan Avanalla, Avalu puts forth a convincing act as a self-absorbed and emotionally abusive husband, who is attracted to Gowri yet put off by her bold sexual overtures.

In recent times, we saw movies like Lipstick Under My Burkha and the short Tamil film, Lakshmi where the subject of woman’s sexuality was tackled effectively.

Nathicharami is yet another interesting take on personal values and societal double standards with woman’s sexuality as the central point. We need more movies like this to enable the society into understanding and respecting female sexuality.

The movie is available on Netflix.

Book-to-movie adaptations are hardly a new thing in Indian films, and as such has been practiced extensively in the past century of Indian cinema.

A feature film deliberately made like a documentary, Madhureeta Anand’s Kajarya is a critical take on the social mores that prompt female infanticide.