Kabir Singh is the latest in a long line of misogynist movies that glorify stalking and violence against women in the name of 'romance'. Time to get off social media and protest in real life.

Kabir Singh is the latest in a long line of misogynist movies that glorify stalking and violence against women in the name of ‘romance’. Time to get off social media and protest in real life.

When a Bollywood film called Kabir Singh, directed by Sandeep Reddy Vanga, released last month, we did not think it was a big deal, because men make movies for men about “men being men” all the time.

We started reading and hearing in more detail about the moive when viewers (mostly women) started talking on social media about how it was to have men around them in theatres hoot and clap for scenes that made them deeply uncomfortable. At the same time the movie went on to earn Rs.250 crores in three weeks.

So after we had watched the movie ourselves, we decided that we need to express our anger and discomfort in a physical space where we could talk and listen to others. 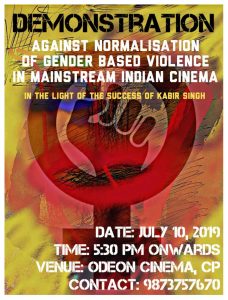 In the past, a lot of us had spoken up in private or on social media against film dialogues, songs and scenes selling stalking and unrelenting wooing as romance. 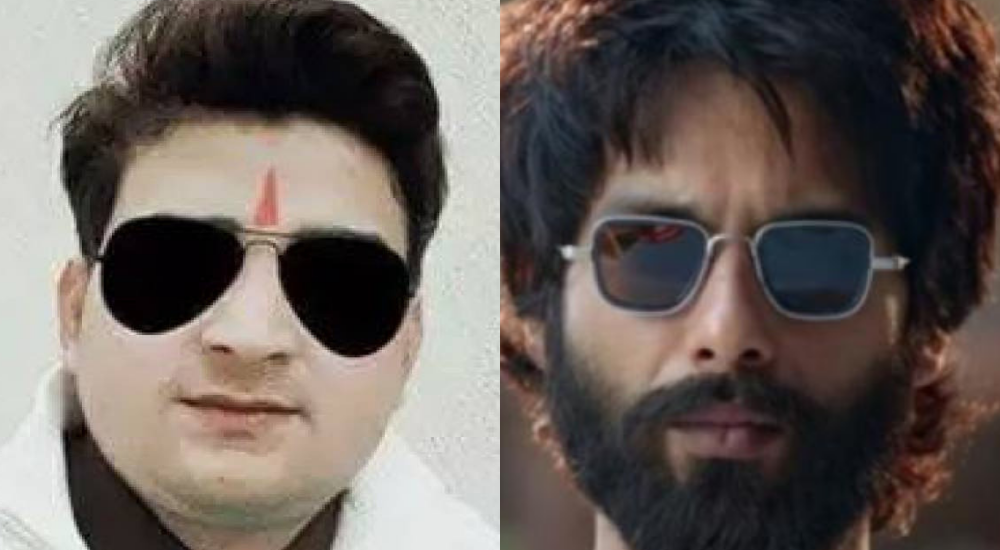 Enough women have spoken up about how they stayed in abusive relationships with manipulative partners since they thought that was the norm. However, the message was either not strong enough or the dissenters were not taken seriously, as is evident from the release and success of movies like this one. 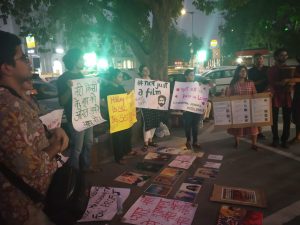 The purpose of the demonstration was to get off social media and our drawing rooms, and talk and register our protest against normalization of gender-based violence in mainstream Indian Cinema. We hoped for people to join and share personal experiences as well as speak about what they felt about this film.

We got together outside Odeon Carnival Cinema in Connaught Place and tried to engage with the public. We also read poetry, chanted slogans and displayed art against glorification of sexual violence. 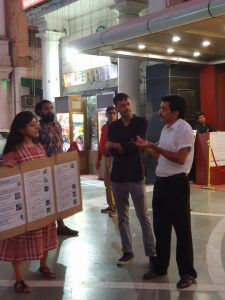 Men and women, intrigued by our placards, did gather around, and we were able to engage them in a discussion. A lot of people were of the opinion that the muck is not in the movies but in our society, and directors only make movies which they think will sell. Many women also shared expressed their views against the movie and how it made them cringe.

While every third woman above the age of fifteen years has at some point been a victim of domestic violence, Sandeep Reddy Vanga defended the romaticisation of violence against women saying that if you cannot slap your partner and have to take permission for kissing them, it is not ‘true love’.

Even as fiction, we cannot and must not let such a narrative occupy our entertainment space. This narrative romanticizes an abusive relationship and abdication of responsibility by a man, as a consequence of which multiple women around him suffer or are constantly under threat.

In one scene, our hero Kabir Singh gets very angry and is about fling a flower pot at his girlfriend’s elder sister but the girlfriend stops him. In yet another scene, he runs after his domestic help for about a minute with the intent of physically hurting her because she breaks a glass while cleaning. He stops only because his friend tells him that “these people” have unions and they would come back for him.

It is almost tiring at this point to assert that a woman should decide for herself how she dresses, but then here comes this film where a woman is told by her boyfriend “apna dupatta theek karo (wear your dupatta properly)” when it slides off her shoulder. To beat it all, our hero’s entry is followed quickly by a scene where he asks a woman to undress at knife point. 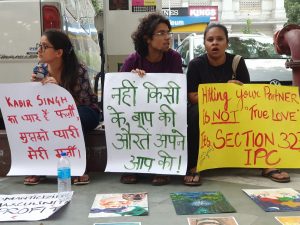 We reiterate that we are not asking for a ban or censorship but to use this movie as a starting point to have conversations on intelligent viewership and to not pretend that it is harmless because “it is just a film”.

View All
Why Do Indian Women Miss To Pick Up Breast Cancer Early - Dr. Sharat Chandra Goteti Explains
How To Become A Data Scientist In India
Divorce Rights For Married Women In India - Legal Rights 101 With YourInstaLawyer
No More Guilt: Exploring The Ways In Which You Can Shed Mother's Guilt
Steps To Landing Your First Writing Job - Want To Be A Content Writer?
What Are The Essentials Of Being A Good Content Writer?
Pop Culture

The 90s generation grew up idolizing Raj of Dilwale Dulhaniya Le Jayenge. Two decades later, we are left wondering what to make out of a Kabir Singh.

Kabir Singh represents the new-age antithesis of the hero (Sanju was another such guy) – one that glorifies toxic masculinity, guttural violence and abuse against women, among his other qualities such as womaniser, alcoholic, drug addict, etc. Wearing a doctor’s coat or crisp shirts does not make it look any better.

Kabir Singh became famous and went on to be a chart buster at the box office which is a dangerous pointer towards what men and their choices have become today.

What is love if you can’t hit or violate your partner freely, says the movie. Sadly, the heroine Preeti is depicted as a feeble, sheep-like character with no voice or mind of her own (once, such women were called doormats).

Sandeep Reddy Vanga, the director of Kabir Singh Sandeep thinks the criticism the movie received for misogyny is bizarre. According to him it's not true love if you can't 'slap each other'.

Sandeep Reddy Vanga, the director of Kabir Singh Sandeep thinks the criticism the movie received for misogyny is bizarre. According to him it’s not true love if you can’t ‘slap each other’.

Here we were thinking that only the character ‘Kabir Singh’ is toxic, but the director proves us wrong!

The movie has broken many records on box office despite the criticism, and the world has seen the toxicity of Kabir Singh. Well, the toxicity doesn’t end with Kabir Singh. The director Sandeep Reddy Vanga in his latest interview with Anupama Chopra has set new records of toxicity.

“OK to slap someone you love”

The director went on a rampage against the critics (who certainly have been completely justified in showing up the glorified toxic misogyny in Kabir Singh). He even made many personal attacks in the interview. On top of everything is the most bizarre way the director justified all the toxicity and abuse in the movie.