Men Have Controlled Women Far Too Long; Any Wonder Women Are Now Pushing Back?

Men have always tried to, and will continue to try and control their women - why, then, is it surprising that women will no longer take their nonsense?

Men have always tried to, and will continue to try and control their women – why, then, is it surprising that women will no longer take their nonsense?

Let’s go down a path less traveled. Normally, when we read about the inferior status of women, the highlights of the articles revolve around – infanticide, sex-selective abortions, child marriages, girl-child abuse, dowry deaths, marital rapes, sexual abuse, domestic violence, human trafficking, rapes, discrimination at the workplace and the list goes on.

Let’s leave these topics to the researchers and eminent personalities. Let’s touch some areas that are already known but less talked about. For a change let’s look inward. Let’s look within. Let’s look at the destruction of relationships caused by Man on Women with his flawed archaic thought process.

All the above mentioned atrocities on Women are the fall-outs of a belief ingrained in the DNA of Man that he is accountable to no one when it comes to his complete ownership over his Woman. As far as the Man is concerned, whichever way you look at it, the Woman is there for him to take advantage of – regardless of where he comes across her.

It can be at home, or at the workplace, at the airport, or on a flight or on the street, in a train or bus, in a pub or a restaurant, or on a dating site, or at a party or the widow or divorcee he chances upon. Man is 24/7/365 looking for a conquest. Something in him, tells him, ‘This one has to be mine’, or tells him, ‘She can get this done for me’. Then the mechanizations within his mind triggers the wheels which set into motion on what needs to be done to achieve what he has envisioned.

She doesn’t have a choice

Our society is undergoing changes on a massive, unprecedented scale. Women and children are not ready to accept this medieval mind-set, where they need to dance to the Man’s whim and fancy.

The family structure is disintegrating or rather has disintegrated. Head of the family concept is over. Within seconds, husband and wife break into an argument, and it’s very difficult for either of them coming to a common understanding on any subject. Even simple sentences said in the most innocuous of ways, escalates into bitterness, anger and violence.

So much anger… and pain

The Man is so blinded by his desire to control his Woman, that he loses sight of the fact that he has lost his Woman’s Heart. She loses respect for him. He falls in her eyes. She begins to question herself and the questions are painful as it disrupts her entire moral fabric. It is Man who forces the Woman to think for herself, about her happiness, her pleasure, her fun.

Some women choose to stay within the line and some cross it. Who is to blame? the instigator or the instigated? The Woman loses her compass. She becomes a drifter in the middle of the ocean. She loses her purpose in living. She lives, she breathes, she smiles, she laughs, but, within she is dead. The light within gets extinguished. The spark in her eyes gets dimmed.

Today, the Woman flatly refuses to lose her identity and her personality for the sake of being in her marriage. She is absolutely clear that, “her objective of entering into a marriage is to be happy, and if her Man is unable to bring happiness into her life, then, she has no interest in being in an unhappy marriage”. The areas of conflict and the differences have become so open that you would want to conclude that actually, Women are from Mars and Men are from Venus.

These differences lead to severe stress in our personal and professional lives. Our relationships turn toxic. Who can we go to? Who can we talk about this to? No One. We don’t have a culture of visiting psychiatrists, so, differences leads to confrontation, tempers fly all over the place, abuses and expletives are exchanged, at times leading to violence and we then reach a point where we term it as – Irreconcilable Differences.

A marriage of convenience

Once this realization is arrived at – either the couple decide to go their own ways or the relationship changes into a marriage of convenience – the couple decide to live under one roof, for the sake of society, parents, children, family, friends and themselves. They find this a very convenient option.

You have the respectability that marriage offers to the outside world and at the same time, you enjoy your independence and freedom. You actually get to cut the cake and eat it too. It becomes convenient to both the husband and wife, that they find themselves in an unhappy marriage, so the next best option is to seek happiness outside their marriage.

Between them, the emotional bond between cracks wide open. The ‘connect’ snaps. For the outside world they are husband and wife, but at home they are more like room-mates. They do a lot of things together, as a happy family, but, they reach a mutual understanding, without, the necessity of any discussion, that both will have their own private lives and there would be no questions asked on who they are chatting with, who they are meeting, who they are with or why they are coming home late or the next day.

They travel to exotic locations, have family vacations, birthday parties, anniversaries, festivals etc are all celebrated with much fanfare and the occasions makes for nice pictures on Facebook, Instagram etc.
The truth is that our life, turns into a sham, we become actors in our real life. We live the life of hypocrites. We become masters at playing games.

We indulge in – deceit, emotional blackmail, manipulation, outright lying, concocting stories within microseconds, having multiple personalities, being self-centered and selfish to the core. Our core gets completely corrupted. We ourselves don’t know who the ‘Real Me’ is? We get disconnected from our core ‘Self’. We lose our identity. We turn into someone who we are not. But, there is nothing we can do about it, as we are caught in the vortex of life. 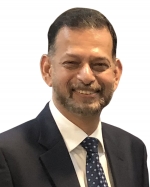 Augustine Chalissery is based in Mumbai, India. He is a Serial Entrepreneur. Core specialization is in the Supply Chain, Logistics and ICT industry. Augustine is a Motivational Speaker, Life Coach, Mentor and Guide. He guides read more...