I had spoken about this anecdote of my life on many an occasion with friends and even briefly online once last year under various contexts but it bears repeating now perhaps more than ever.

This incident occurred more than 12 years ago. Having joined as a post graduate in anaesthesiology in Pune, I was the junior most student in my department. As a newbie, I was used to the usual barrage of questions about my family, academics and all that. But early on, I had overheard queries asked of fellow juniors which had been unsettling and not necessarily in a ‘ragging’ sort of way. A certain conservative senior doctor had been asking around about the castes of the new doctors who had joined the hospital and eventually, came up to me while I was helping during a surgery and asked me bluntly – “Tera jaat kya hai? What is your caste?”

It was the first time in my life that a doctor had really stressed on  my caste and I knew from previous encounters that this mattered to him. I told him frankly that I was a Thiyya. His nose crinkled and he frowned.

“I have never heard of Thiyya. Is that as good as a Nair or Nambiar?” he asked, as though we were discussing Baskin Robbin flavours.

(For those of you who need context, Nair and Nambiar would be considered ‘high castes’ in ‘Mallu blood’ hierarchy.) Now I knew I would be treated like crap once he realized I was not a high enough caste to matter so I said the first thing that came to my mind at that moment.

“Sir. Actually we Thiyyas are higher than Nairs and Nambiars in Kerala. We have always looked down upon them.” A newfound respect dawned in my senior’s eyes. Technically, I wasn’t lying, you see.

Thiyyas have been associated with toddy tapping and so have been sitting on top of coconut trees, looking down on you all for generations! But honest to God, the treatment that I and my co-pg (also a Thiyya, by an insane coincidence) faced from that particular staff member changed from that day on. We were never mocked or treated like a low class by this individual ever again during our course.

This is a story the two of us laugh about even today while talking about it with our colleagues.  But as I read about the suicide of a medical post graduate Dr Payal Tadvi from Nair hospital in Mumbai under pressure allegedly from repeated abuse from her seniors for her caste, I realize that I was actually lucky. Back then, the concerned doctor was not tech-savvy enough to Google about my caste. He did not have the presence of mind to confirm with any other Malayali about my claims of being an ‘upper echelon’ caste.

I was lucky. But so many still are not. And yes, I know this applies to all fields and professions in India (Bravo! Give yourselves a round of applause. What a thing to be consistent about.) but I am writing this specifically to call out the faculty and staff who are doctors.

Why doctors need to evolve beyond the caste system

Yes, LIKE EVERYONE ELSE, you have been conditioned since childhood with certain belief systems that are ingrained in you by the time you enter the medical college. It reflects in your religious beliefs, your choice of food and what not. But you are a human being who can evolve when new knowledge is passed on to you.

After half a decade in the medical field and witnessing the miracle of birth from every conceivable angle, you no longer believe that babies are delivered by the stork, do you? Then how can the same you who has viewed thousands of slides of blood and every organ under the microscope, you has witnessed everything from dissections of dead bodies to operations on hundreds of living beings still believe in something as ridiculous as ‘someone’s blood or body being of a lower caste’? 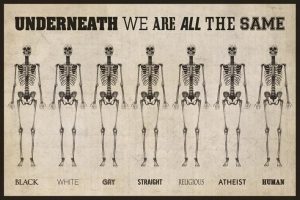 Which pathology slide did you see a ‘low caste’ cell roaming around in?
When you ask for a blood donation, which test do you use to identify the caste?
When you deliver a baby, where do you look to see the caste?
Which part of your examination of a patient’s beating heart reveals their caste to you?

Enough with the whataboutery

Enough about asking others to fix their problems first. Your justification for the existence and necessity of a caste system (and why some people should remain lower than you because of the blood in their veins) is what killed a young doctor this week in 2019.

Dr Payal was studying to be a gynecologist. There was nothing wrong with her blood. The problem was in the mind of the doctors in whom it had been ingrained that this woman was of a lower caste. To hell with sly tongued politicians, traditional beliefs and reservation systems – as a doctor, you owe it to society to have the basic decency to evolve enough to give up basic bigotry and then speak up so that no one else suffers this again. If you know a member in your department in a hospital is discriminating against a doctor or patient on the basis of caste, have the guts to call him/ her out, whether s/he is the head of the department or a brash hotshot.

Do what it takes so that in this system that is failing Indian doctors at so many levels from reservations to violence, a cancer as outdated as caste does not kill a young doctor ever again.

Unlike all the other maladies, we do not need government approval, MCI inspections, pharmac company funds or new age gadgets to eradicate casteism in the Indian medical field.

Over the years, I and my co-pg – two who should have been perched atop the coconut tree but instead ended up inside an operation theater – have probably relieved the pain of over 15,000 people of all ages, sexes, colours and religions. We have worked 36 hour shifts for years and struggled through insane hours and harrowing moments to keep you alive against terrible odds.

If, after this, all you see is our caste, then I pity you. And honestly, I don’t know if I would ever want to be friends with someone like you.

Rest assured however, that should the time arise, I will look beyond my prejudices and still heal your pain unconditionally.

Author: The only Indian to have won First Prize in both Season 1 and 2 of India’s largest literary competition (Write India), Dr Roshan Radhakrishnan is an anaesthesiologist from Kerala who writes on various social and public awareness issues.