My Mom Purnima Varma Is A Pioneer; An Entrepreneur Who Built Lives, Not Just Institutions

Let me share with pride the story of my mother Purnima Varma, who created the Institute of Designing in Jaipur, that educated and built the lives of many.

We often hear/ read stories of many exemplary women, high achievers in their respective fields. It is important to acknowledge the great work and achievements of these women. In a world that still does not offer equal opportunity or a level playing field to women, recognition of those who have crossed many barriers to reach where they are today is essential.

To a common woman, the achiever’s story might well be a benchmark, but perhaps not an example she would be able to follow easily. Most of us common people look at the people on top with longing but never assume that we can reach those levels. This is where it becomes important to look at women around us – women who have faced issues similar to ours, fought the same battles, maybe even worse than ours, and come out a winner. When we see them overcome the challenges life threw their way, we believe we can do that too. We can also achieve, overcome, overthrow, win. As I wrote a few months ago – I have been shaped by the women around me.

This is why we should bring out the stories of everyday women, women like ourselves who have made the best of their circumstances. By being true to themselves they tell us we can do it too. They have overcome grief, physical hardship, disability, poverty and built institutions. They are us. We are them.

As I spoke to a few such women, a common pattern that emerged was their own mothers or fathers, that shaped them to who they have become. So let me start with the story of my mother, Purnima. She was part of the first wave of women entrepreneurs of the 1980s, who started out on their journeys, without any examples they could follow, without formal guidance but only their own skills, confidence and conviction.

“The person I am today, is in a large part influenced by how my mother brought me up. Even in 1960s, when women had limited power over their own lives, she wanted to make sure that I was educated and trained to be self dependent. I was given full choice in choosing my career and life partner,” says Purnima.

A textile designer by profession, Purnima is one of the handful of women entrepreneurs that existed in the small city of Jaipur of 1980s. She established her own institute that went on to develop a formidable reputation. It is also probably not an exaggeration to say that she pioneered design as a serious career option for a generation of young women that had started to aspire for economic independence and challenging professions.

Soon after moving to Jaipur post marriage, she was approached by a lady wishing to start courses in textile designing for young women. Purnima accepted her offer to develop and conduct the course which soon became very popular. A few years later, however, due to differences with management, she resigned from her job.

Given the newness of the design field and lack of quality teachers at the time, some of her students insisted, begged and cajoled her to open her own institution. Moved by their faith in her and their own passion to prove their abilities to the world, she opened the Institute of Designing (IoD) in 1984 out of her own house. The garage became a classroom, the driveway was laid with two large printing tables and the terrace a place where students gathered to discuss and debate. Without any financial backing and with only her own skill and experience, Purnima took a decision that changed the course of her life and the lives of many of her students. (and I guess mine too!)

Keep in mind that this is the Jaipur of late 1970s – early 80s. Like most Indian cities of that time, Jaipur also aspired to greater development and urbanization. Infrastructure was developing, new schools were opening and businesses were growing. The mindsets were however still conservative. Many girls from well off families were still not being educated and many of those that were sent to school, were married off as soon as possible. Girls getting professional education were even lesser and the motivation in a large part was to add to their “sarva gun sampanna” status and make them more eligible for marriage. 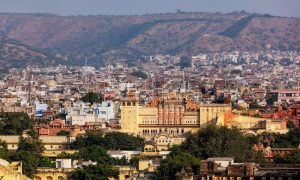 The first batch consisted of 7-8 girls which soon grew to 20 plus and then crossed 100. At its peak, the institute had more than 120 students, many more classrooms had come up on the terrace and classes were conducted in two shifts. The spare room had been converted to the front office.

As the garment and fashion industry continued to grow in Jaipur and in India, more courses were added to cater to various needs. Textile designing and printing, fashion designing, garment technology and so on. As NIFT and NID became more popular, designing became a more credible option. Children with a creative flair could now opt for a career more in sync with their talents – instead of having to go for science or commerce. This not only led to a greater demand for the institute, it also ended up in introduction of foundation courses for students who wanted to prepare for NIFT and NID entrance exams. 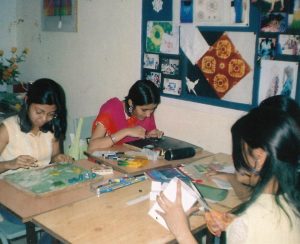 By 1990s the institute had developed a strong reputation, so much so that postmen only needed Institute of Designing written on the address to deliver mail. (One of our neighbours once got a letter addressed “opposite IOD!” Another time, when I told a new acquaintance my address, he exclaimed that I live in Purnima Varma’s street! The pride I felt telling him that I am actually her daughter is indescribable!). She even had a few international students to her credit – who came all the way from the U.S. and Japan, lived a year or two in Jaipur to learn the craft.

Purnima was very clear that her courses will not be constrained to theory. Well aware that she was creating a skilled workforce that has to go out in the world and work, she laid a huge emphasis on practical work and exposure to industry. Her students did everything from scratch, right from preparing their own dyes to stitching their own designs. They were also given many opportunities to interact with the industry, display their work at exhibitions and fashion shows. 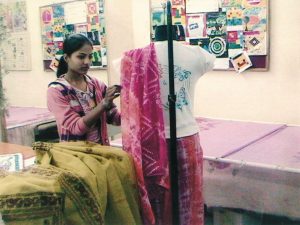 One of the exhibitions attracted such a large crowd that the management of Jawahar Kala Kendra (where the exhibition was held) mentioned that this was the first time ever an art exhibition had so many visitors. 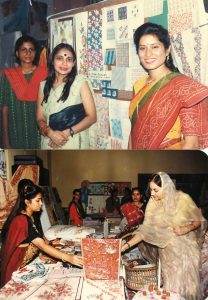 In 1989, Purnima conducted the first ever fashion show in Jaipur. This not only gave a chance to her students to showcase their work, it gave them important lessons in managing such events from scratch. As was practice, the entire event was created and managed by the students and teachers of the institute.

The fashion show started with a closed theater in Jaipur, and over the years moved on to the large open air theater with the audience going into thousands. Here are pictures from one in 2001. 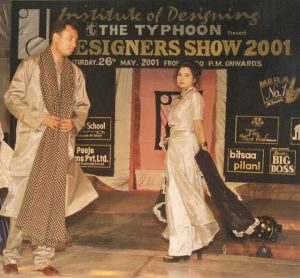 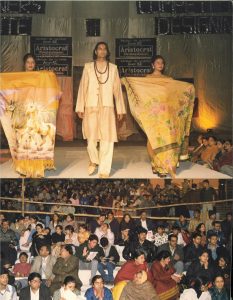 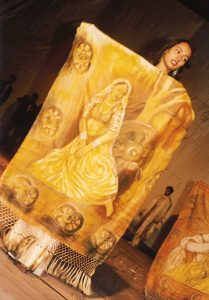 As a child (later teen), the institute for me was a fascinating ground for growing up (more in a later blog). On a busy day, you could see students busy tying knots on their bandhni designs. On the terrace, a few others could be seen making their screens for printing – painstakingly hammering the fabric on the wooden frame; tracing the design on the fabric and blotting out portions with enamel colour. In another corner you could smell the strong fumes of melted wax where students were dyeing their batik cloths. Upstairs sewing machines hummed amid the chatter of students.

During the days leading to fashion shows, there was palpable excitement in the air and music all around as amateur models practiced their catwalk and students busied themselves preparing their costumes.

Through the decades of 1980s, 90s and 2000s, Purnima was witness to the changing social landscape of Jaipur.

Some of her earliest students were driven to classes by their drivers who stayed till class ended and took them away soon after. Later in late 1990s, more and more girls started coming on their scooties or kinetics. One year, she had three students from the same family – mother, daughter and daughter in law – all three wanted to explore their selves and become more than just their familial duties. Many of her students went on to take jobs and start their own enterprises. Many came to her under-confident and went out ready to take on the world. A student describes her experience – “When I came to ma’am, I was like Jassi (an underconfident character from a popular TV show) and today I am as confident of myself as I can be.”

Unlike today, when education has become a money minting machine, at that time, an education provider was revered for the learning they imparted. Purnima established the institute to develop confident, mature women able to hold their own in a world, not balanced in their favour. Like a sapphire, she symbolizes honesty, purity and trust and those are the values on which she built her institute.

In her own words, “the best compliment I ever received was – ma’am aadmi banati hain (ma’am builds a person)”. Her life’s mantra – “Be true to yourself and have courage of conviction. Before becoming ‘somebody’, be a good person”.

So when I am in doubt, I think of this woman and tell myself, “if she could achieve all this, why can’t you solve your own little problem?” 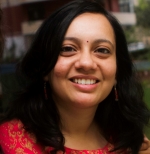 A full time professional in the development finance space. Wife to a design entrepreneur and