Gauri Mahadik lost her husband Prasad Mahadik just 2 years after their wedding in a cross border conflict in December 2017. She has since joined the army herself, following in his footsteps, doing what he loved most. A fitting tribute.

War can devastate. War can break up loving families. War is not a game to be played on a screen, because unlike in a game, those who are killed, those who are martyred, are lost to their families forever. War should not be just a reaction to inflamed passions. I’d like you to look at this one case of an un-fillable gap created in this young woman’s life. Of course, the young woman being Gauri Mahadik, she has coped with the one way she knew best – to live her husband’s dream.

In December 2017, Gauri Mahadik got the dreaded call that completely changed her life. Her husband, Prasad Mahadik, had been martyred in a cross border conflict, that had been going on since October 2017, and carried on till late 2018.

This was something that most defence wives and families live with all the time. The possibility that the unspeakable happens. As a civilian, I often wonder, how do they live with this sword hanging over their heads? What gives them the strength to do so? What makes them take on lives of this sort, sometimes voluntarily?

Which is what struck me in Gauri Mahadik’s story.

When she met her husband for the first time in February 2014, and subsequently decided she wanted to marry him, even her father-in-law to be then, tried to dissuade her. “Even my Father in law said, ‘Anything can happen, at any time’. But I said that anything can happen to a civilian too and it would be my privilege to be married to someone who was protecting those civilians.”

But Gauri was sure, and they married in 2015. “We were very different; I was talkative while he was reserved. Still, we fit like pieces of a puzzle even though he was away for long periods of time,” she says. 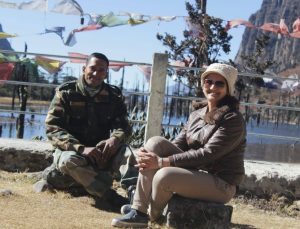 And it certainly must have been difficult. As newlyweds too, they were apart for long periods of time because of his duties, but Gauri was supportive, because this was what Prasad loved. But she says, “On the days when he was home, I wanted to capture every moment. So I have more than 36,000 photos of him! I even recorded our phone calls. And on the days when I missed him, worried about him, or simply wanted to hear him say ‘I love you’, I would listen to those recordings.” 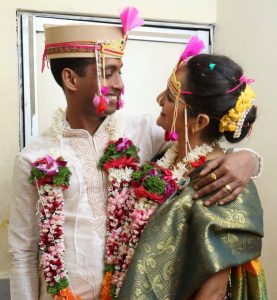 Read her story here, on Humans of Bombay:

Salute to the likes of Gauri Mahadik, brave hearts who live with the uncertainty of the lives of their loved ones. 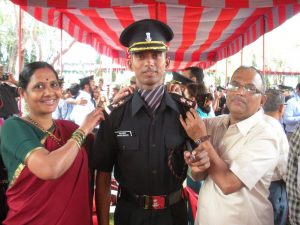 Prasad Mahadik with his parents

Maybe we should be more considerate of these families who sacrifice so much for the lives and security of us civilians, so that we may live in peace?

Maybe we should not actively create situations where more of them suffer what Gauri Mahadik did?

And maybe we should be more mindful of their pain and support them whenever they need us by not calling out for war from our seats?

These 6 Women Are Not Just ‘Army Wives’, But Achievers In Their Own Right