Meet Meghna Girish, brave mother of martyr Major Akshay Girish, who inspires us with the way she has coped with her grief and worked to keep his legacy alive.

Meet Meghna Girish, brave mother of martyr Major Akshay Girish, who inspires us with the way she has coped with her grief and worked to keep his legacy alive.

‘Our flag does not fly because the wind moves it. It flies with the last breath of each soldier who died protecting it’.

For a soldier, his country comes first, and when duty beckons, he rises to the occasion and proves his mettle, come what may. Major Akshay Girish was one such soldier, a hero, who made the supreme sacrifice while protecting our people during the Nagrota attack in November 2016. Everyone has different ways of coping with grief. But, Meghna Girish, mother of Major Akshay Girish, chose not to let her grief overpower her. Grief-stricken she was, shattered she was, but she was not broken. She reveled in the valiant feat of her son and went on to savour his memories while constantly working towards reaching out to the families of other forgotten martyrs.

I have been following the journey of this extraordinary mother and she has never ceased to inspire me. So, it was my pleasure to connect to her and know how being a ‘martyr’s mom’ changed her and what kept her going.

The day that changed life for Meghana Girish

On that fateful day of November 29th, 2016, her son displayed indomitable courage and made the supreme sacrifice, and Meghna Girish came to be known as the mother of a martyr.

As agonising as it must be, she narrates the incident that changed her life forever, “On the fateful dawn, very heavily armed terrorists attacked a neighbouring Artillery unit in the dark, and killed four soldiers before entering two residential buildings in Nagrota. The terrorists had trapped 16 women, children, and unarmed men inside two residential buildings. Major Akshay was chosen to lead his Regiment’s (51 Engineers) Quick Response Team (QRT). After two hours of continuous fighting, he moved ahead alone to evacuate the families inside, and engaged the hidden terrorist leader in a fierce gunfight at close range. He was hit by multiple bullets, a grenade was directly launched at him, and Akshay made the supreme sacrifice. Two others were also martyred fighting. Three terrorists were killed in the operation, and all 16 hostages were saved un-harmed by the valour and sacrifice of our soldiers”.

Coping with the loss of a loved one

A mother can never come to terms with the loss of her child. But as time races ahead on its ‘winged chariot’, she can learn to live with her grief. Meghna did the same, but she knew she had to make sure that Akshay’s legacy continues.

Morever, she had to be an anchor and the pillar of strength for her daughter-in-law Sangeeta, and Akshay’s three year old daughter Naina who would question “why can’t papa come back from God’s house?” She adds, “The thought that keeps me going is that if Akshay was destiny’s child and had to go, this is how he would have wanted to – in heroic glory. His life had purpose and he lived it very well”.

After her son’s untimely demise, Meghna took to writing. She started a blog which was in a way “a journey to find new meaning after personal loss”.

She says, “More importantly, it connected our family to lakhs of readers, who have reached back to tell me how they take inspiration and courage from Akshay’s life, to lead their own with positivity and strength. He always was very close to me and is now my guiding light”.

“We have chosen the path of motivating and assisting youth, particularly students in schools, colleges, and universities, to strive for a career in the defence services and allied government services. The aim is to attract and promote young talent which has the spirit to do good for our country”.

In collaboration with institutions and committed individual volunteers organizes and facilitates the following:

Meghna is also an active member of the DESH family, which is a group that brings together families of martyrs. Elucidating further she says, “DESH was founded by Vikas Manhas from Jammu, Anasuya Mitra from Lucknow, and Adrija Sen from Bengaluru to support martyr families, and motivate Indians to respect and honour every soldier who sacrificed his all for the country. DESH also inspires youth to serve the nation.”

Is the country doing enough for martyrs like Major Akshay?

When asked if she feels disillusioned at times and if she feels the country is doing enough for its martyrs, Meghna quips, “In comparison to the past, there seems to be more love and respect for martyrs among common citizens, but very little has changed in the attitude of decision makers.

Many martyr families face difficulty to get even entitlements from their respective state governments.

Promises are made and broken, and even announcements in response to public sentiment like ‘we will name the road, make a statue to honour the martyr’ etc are only for publicity. This hurts”.

The proud mother: an epitome of strength

Though nothing can fill the void that her beloved son’s demise left, pride will always outshine sorrow. Meghna Girish intends to work towards bringing about a change in society wherein a martyr is accorded visible respect. After all, “is their sacrifice only a family’s personal loss?” she questions.

It could have been easy to surrender. Yet she chose to be like her son. Like mother like son – brave, strong and undeterred. Her sense of gratitude, and the will to circumvent even the toughest of times makes her what she is. Major Akshay Girish would be so proud of his mom today.

I am awed by this mother’s strength, and I sincerely hope, we as a nation give our martyrs the love and respect they deserve. So, the next time you read about a martyr also think about the dreams that were quashed, the loved ones that they left behind, the kids that were orphaned- all for protecting our motherland. 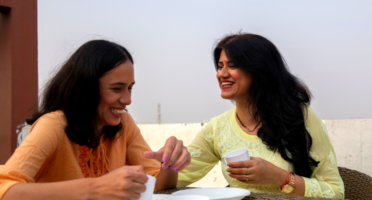