It has been almost a month since I saw Bird Of Dusk at the Jio MAMI 2018, and it is only now that I am writing about it. This is because the overall experience was so mesmerizing and inspiring, that my brain desperately needed sufficient time to absorb it!

It was after all a #fangirlmoment for me.

Never in my life had I even even dreamt of meeting Sangeeta Datta, one of the closest friends of Director Rituparno Ghosh, as well as his Associate Director…Rituparno Ghosh, the man, who means so much to me! The man, so close to my heart that I can go overboard about him anytime, anywhere!

Bird Of Dusk is more of a spiritual lesson for me. I could see a reflection of myself in multiple ways through the film. 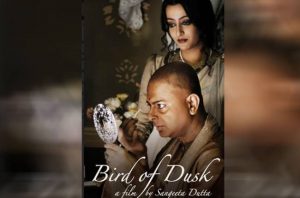 Honestly, I have spent 28 years, asking myself the same questions! And often I felt myself lacking clarity to answer those questions, which Ghosh did boldly, in front of the entire world. He spoke boldly about the futility of human lives; he spoke about the true purpose of an artist or a creator. When I watched him speaking those words in the darkroom, I felt tremendously empowered, and needless to say, inspired. I felt, even though I might have watched that interview or that footage earlier, those moments are worth viewing more than once. They are worth viewing almost every day; and the compilation of the interview footages especially deserve watching.

Then there were those sections of that film, which mellowed my heart. “Bonomali tumi, poro jonome hoyo radha…” played in the background, and I could feel my heart pounding. It evoked so many emotions in me that I literally wanted to run out of the theatre to calm myself down. I could see a reflection of myself on the screen, and that scared me. I am not as strong as that genius, to be able to stand up in front of the entire world, and admit that I do not fit in.

‘Fitting in’ is all we have been trying to do, all our lives, even though we know that we are all queer, in some way or the other. And what happens when we fail to ‘fit in’? That thought scares most of us and, we give up.

In short, the film talks about pretty much everything. From unrequited love to handling rejection; from the challenges of an artist to gender confusion or identity crisis; from creators’ block to self-redemption. After all, the film is all about the mind of a genius. A mind that was capable of spreading a lot of love and positivity across the globe. Unfortunately, despite his repeated urges for acceptance, the cruel world turned him into a lonely and depressed soul. But, he never gave up. He connected with like-minded people, most of them women.

I have always admired Rituparno Ghosh for his female characters. However, when I first watched Chokher Bali at a very tender age, I felt really angry with the director. I really loved the way Tagore portrayed the character of Binodini. A soul, so innocent, pure and full of love! She was crafted with extra delicacy and thus she emerged as sheer perfection for me. In my sixth grade, I wanted to be as perfect as Binodini. So, I felt really uncomfortable on peeping into her actual character or her desires. Yet, that was also how I grew more interested in Bengali films, particularly Ghosh’s.

By the time I started pursuing a Masters in Film Studies at Jadavpur University, I turned into a huge fan of not only Director Rituparno Ghosh, or the youth icon, but also the Copywriter, and the Designer Rituparno Ghosh. I was working as a part-time copywriter at that time and I realized the importance of brevity and precision in the advertising industry! So, when my senior invited me to watch the film at JIO MAMI 2018, I went into a trance-like state.

After spending two years in my dream city, Mumbai, working in my favourite profession (Research and Script Writing), I missed my home city for the first time ever. How ironical it was for me, to experience the craze of the Kolkata International Film Festival, sitting comfortably in a multiplex in Mumbai.

During MAMI, Mumbai multiplexes function perfectly, unlike the massive mismanagement sessions that occur in Kolkata during KIFF. But, oh boy! That craze, that crowd, the running from one theatre to the next (because the theatres are thankfully close enough in Kolkata) within the scheduled time…the food, the festive vibe, the extravaganza! We need to dress up in sarees and bindis because the festival is here! The biggest festival, for most Bengalis residing in Kolkata, is undoubtedly KIFF, after Durga puja.

The frames in the movie showing my university literally gave me goosebumps. I realized how badly I wanted to walk through those corridors, to touch the benches and to sit in those classrooms again! I feel blessed that I have permission to enter that iconic building of Arts at Jadavpur University for my entire life. The green zones and the other parts of the campus, however, continue to have open gates for anyone who wants to think, read, contemplate, exchange ideas or knowledge and to create, while experiencing the eco-friendly environment and soothing their eyes watching the lilies.

As for my Subhajit, I think this is one of his best works till date. As his student, I had the opportunity to roam around the City of Joy for late night shoots, and I felt awestruck at the beauty of my own city. Every city has its own character, and my mentor has taught me how and where to find them. In this film, he has shown audiences the city of Kolkata exactly as he sees it. ‘The same places, these mundane streets can turn into incredible tales if you have the eyes’ is what he taught me for two years and that’s what this film does.

I found myself incredibly blessed that evening, to have the opportunity of dining with a charismatic personality, the director, Sangeeta ma’am (I am addressing her as ma’am because she is super senior to me) and I could only speak so little. I felt I wanted to listen to her much longer, to learn about her experiences, her pain, her challenges as a woman filmmaker in India. What kept her going, to stay this strong and to be able to fight back the challenges that came her way? I wanted answers, and I came back to listen to her Q&A session again the next day, and the next day as well!

As we all know, it is really difficult to release a documentary commercially in India, and unless you release your work, how do ordinary people like us access it? So, they took up this incredible task of initiating a change.  Good documentaries have far-reaching effects that go beyond merely informing an audience. They are capable of evoking an almost spiritual experience among the audiences as this one did in me.

So, even though it is too late and the film is doing fairly well all over the world (it is going to almost all the festivals across the globe) I am writing this post to urge Indian audiences, to catch the film as it reaches theatres close to you soon. I am sure most Bengalis are eager for the theatrical release in Kolkata. As for Bengalis settled abroad, you must not give it a miss, because you will literally drool over the amazing views of the city during the festive season. Not to mention, there are enough shots of Durgapuja and idol immersion to keep you going for the next few years!