She Longed For Freedom, But The Real Meaning Of Freedom Was Surprising…

A girl hailing from a conservative community dreamt big of having absolute freedom for making her own decisions in life. She wanted to be independent. This is the story of how she managed to achieve her dreams.

A great comedian and filmmaker Charlie Chaplin once said, “Nothing is permanent in this wicked world -not even your troubles”. Being aware of the saying, we long for certainty. We want to settle down in life. This is the story of a young girl with dreams to settle in a big city and eventually settled down to strive more.

She was the only child of her parents, who lived in a small town where people had old, narrow views. She belonged to a community where girls were not allowed to complete their education. They were made to fulfill their destiny by marrying men, manage their household and serve their folks. Yet she was lucky because she had a father who understood the importance of education and allowed her to attend school. This brought unnecessary attention from her neighbours but her father was determined.

One day on her way to school she noticed many sparrows flying in the sky. She wondered how fortunate these birds were! They had the privilege to roam anywhere in the world. No one is going to question them. To some extent she envied their freedom. It was like a dream for her. She wished if she could also have a pair of wings.

On her way back from school she shared her thoughts with her mother who was a noble and religious woman. She caressed her daughter and said, ‘we don’t need wings to attain freedom and fulfill our dreams. God has gifted us a mind and willpower to gain knowledge and attain anything in this world.’ Listening to her words, she decided to study sincerely, gain knowledge as much as she can and make an independent identity, so that she can stand up for herself and be free.

Time flies, 22 years passed. She turned out to be a brilliant student and excelled in her studies. She got a job in a very reputed firm. Everyone was happy and proud except herself. Instead she preferred staying at home where she came from. She wanted to spend rest of her life with her aging parents who were not willing to abandon their roots and settle in a different city.

She was not very sure but after putting a lot of thought into it, she rejected the offer and started finding an opportunity in her own town. No one appreciated her decision. One question haunted her for a long time. Isn’t she stepping back? She always dreamt of living in a big city. Now she had an opportunity and she is backing off? She went to her mother for advice who said, “You are free to choose any path you wish”. A smile spread on her face. She is free! The sparrows from her school days crossed her mind. She finally realized that she has grown that pair of wings in due course of time. The only difference was that instead of making her fly, her wings strengthened her to reside wherever she wanted. She was on cloud nine. She was home. Soon she got a job there in her hometown.

Earlier she used to be fascinated the freedom of birds that allowed them to fly anywhere on earth. Now somewhere in the journey of her life she realized that even though birds have the capacity to fly anywhere, they choose to stay in the same place. Probably because they are ‘home’. 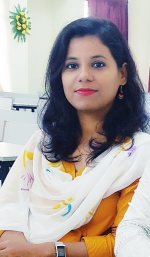