Bollywood, popular media, many advertising commercials and stand up gigs, haven’t really helped the cause of Indian classical music much. There is mostly a comical way of portraying riyaaz (practice of music) as, “Aaaa” gamaks, and people getting bored or youngsters making excuses and running away from it. This is far from reality, but directly or indirectly, popular mass media has done quite a lot of damage. But, more and more youngsters taking up Hindustani music and Carnatic Music seriously are definitely challenging this perception.

Proving such clichéd portrayals wrong is one such young upcoming Hindustani classical vocalist, 32-year-old Dhanashri Ghaisas. She happens to be the student of renowned Hindustani classical vocalist Dr Ashwini Bhide-Deshpande. A musician, an erstwhile architect, a wife, a mother, a homemaker and a performing artiste now, she wears many hats with grace. Her music is important to her, and despite being busy with everything else in life, her time for everyday riyaaz is non-negotiable.

One voice, many stages

A recipient of the ‘President’s Gold Medal’ by the All India Radio for Semi classical and Light music, Dhanashri stood first in Hindustani Vocal music in the All India competition by Acharya Vishwanath Dev Sarma foundation, USA and is a Graded artist of all India radio. She has performed at various classical and semi classical music concerts in India and abroad.

The Pandit Sawai Gandharva Bhimsen Mahotsav is one of the world’s most prominent and popular Indian classical concerts. This program was started in 1953 by Pandit Bhimsen Joshi, a great Hindustani classical singer, as a music conference to commemorate the achievements of his master, the legendary Pandit Sawai Gandharva. To any Hindustani music afficinado this program will be on the top of any list as a must go to program. It is also extremely popular as a concert that showcases every upcoming and promising talent in the world of Hindustani classical music. Dhanashri Ghaisas was invited to sing on this stage in 2016.

Ganasaraswati Mahotsav is another great stage, which was started in 2013 to commemorate the Ganasaraswati Kishori Amonkar Tai’s contribution to music. This stage not only is a stage for taking the music of legends to the masses but it also promotes upcoming promising talent too. 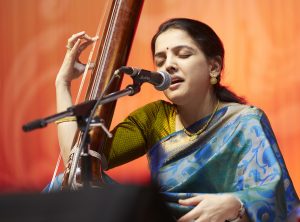 Performances on these stages such as Shreemath Sangeet Samaroh in Benaras, the Pandit Mallikarjun Mahotsav in Dharwad, and many others too, are very special to her as audiences in such places are quite learned and it’s a joy to perform in places where the music is understood, not only appreciated.

Dhanashri has also received the Late Seetaram Dixit and Malati Dixit award for semi-classical music, as well as scholarships from the Ministry of Culture, Government of India, the Sawai Gandharva Scholarship and the Late Ushatai Muzumdar scholarship.

Dhanashri was born into a musically inclined family and grew up listening to music. Her mother is a classical music student, who trained under Smt Kamal Tambe, a senior disciple of Ganatapaswini Moghubai Kurdikar. She grew up surrounded by the Hindustani genre, thus being strongly influenced by it. She considers herself fortunate and blessed to have Dr Ashwini Bhide as her guru, whom she fondly refers to as Ashwini tai. But the inherent talent only started nurturing and forming shape in her teens. Her first guru Smt. Kumudini Katadare disciple of Smt. Kamal Tambe started honing her skills at the age of 16.

Later, it was but the most natural choice to turn to her own aunt, her mother’s brother’s wife, Dr Ashwini Bhide, who took her under her guidance, furthering her natural talents and inclination towards Hindustani classical Sangeet.

My Guru, my tai

Not only music, but a way of life is what one learns from a guru. Every guru and shishya has a special bond, and a Guru is more than just a teacher. Not only does she impart her knowledge, a guru shows you the path.

A guru can give you their best, but it is on the shishya to take it forward by diligent ‘riyaaz’ and practice, and being the shishya of a vocalist fo Dr Bhide’s stature certainly comes with a responsibility. “As everyone knows, Ashwini Bhide is a multi-faceted person. From acquiring masters in Microbiology to a Doctorate in Biochemistry, it doesn’t come easy. Seeing how she did so well in whatever she took up, was a huge learning curve for me and all her students,” says Dhanashri. 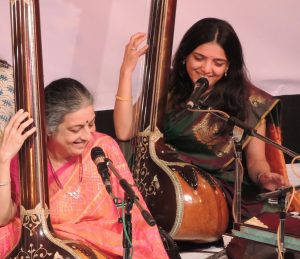 Before Dhanashri got married and moved to Mumbai she shuttled her way from Pune to Mumbai every week for her sessions with her guru Dr Bhide. Learning was always an enjoyable process which she never considered a chore. Her motto has been to enjoy her learning curve as much as possible.

One may ponder: on belonging to one family, how did they maintain a guru shishya distance? “My tai never differentiated between other students and me. Though being a part of the family and being a close knit one gave me an edge to observe the thought process and creativity of a great mind and how it works. To observe a genius living, breathing and thinking so closely was a privilege,” shares Dhanashri.

A raag or a building – make the foundation strong!

Dhanashri is also an architect, who has worked in the field of architecture for 5 years. She gave it all up for music, as her calling for it was much stronger, thus making music her chosen path.

“Both these subjects are very close to my heart. I feel they are both mediums of expressions, and are trying to say something, an idea, thought or emotion. When you design a building, its foundation is the most important thing, but you also have to pay attention to its aesthetics, utility, and functionality. In music, a musician has to build a raag, with sur-lay getting together, and create good music.”

Furthering this thought, she shares, “There is a sense of proportion, symmetry, and balance that is common to both, as both are art forms. It could be structured like a building or expressed like a painting. What you have to say is most important.”

Passion for whatever you do is supreme

On how she manages motherhood and a musical journey, Dhanashri feels, if one is passionate, nothing can stop you from your goals. Having a family is a blessing, not a stop or hindrance. “My family has been my biggest support system and I owe them everything. If there is enough passion in you, you will manage everything and still find time for your art or job or whatever it is you do. Being passionate enough is everything to sustain multi tasking in life, I feel”.

Is it a race out there like every other field?

“I always enjoyed what I learnt, I never looked at it as – oh I have to do this, come what may, I will accomplish this. No, that wasn’t the approach for me. There was a love for music, and I thoroughly enjoyed my classes and learnt with immense joy”. 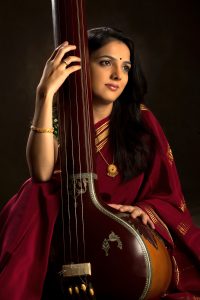 Dhanashri also feels there is a healthy competitive spirit around her, and she wants to do better than yesterday and doesn’t compare herself to anyone. She owes a lot of this to her Tai, whom she quotes advising, “Find your individuality in your music, and establish that.” Dhanashri makes it her moto to follow this and tries to be very individualistic in her renderings.

I was fortunate to listen to her croon exclusively for me, a woman centric Hori, “Tum Radhe bano Shyam, hum nandalala”, you be the radhe, and let me be Krishna for a change, and play hori with me. Dhanashri’s bold but extremely melodious voice continues to linger in my ears.

Riyaaz is the only way, no shortcuts!

Dhanashri stresses on everyday riyaaz, because, “if you are practicing on a daily basis then you have command over your medium through which you are trying to express your music. You can then present your music to your best of your ability in a concert. Accompanying the guru on stage is a huge learning experience. Tai always gives her shishyas an opportunity to sing in between in her concerts, and does appreciate if they do well, and encourages them to do better. Sometimes listening to a shishya accompanying her guru on the taanpura, people invite them to perform independently in festivals which are organised to showcase the talent of new budding artistes like us.”

Message to all budding artistes

“If you have enough passion about your own music, pursue it. Enjoy the process, and work hard.“

A writer and singer by soul and homemaker by role, I am Malini Misra. I

A Whole New World Of Music Apps: With The Dell Venue Tab