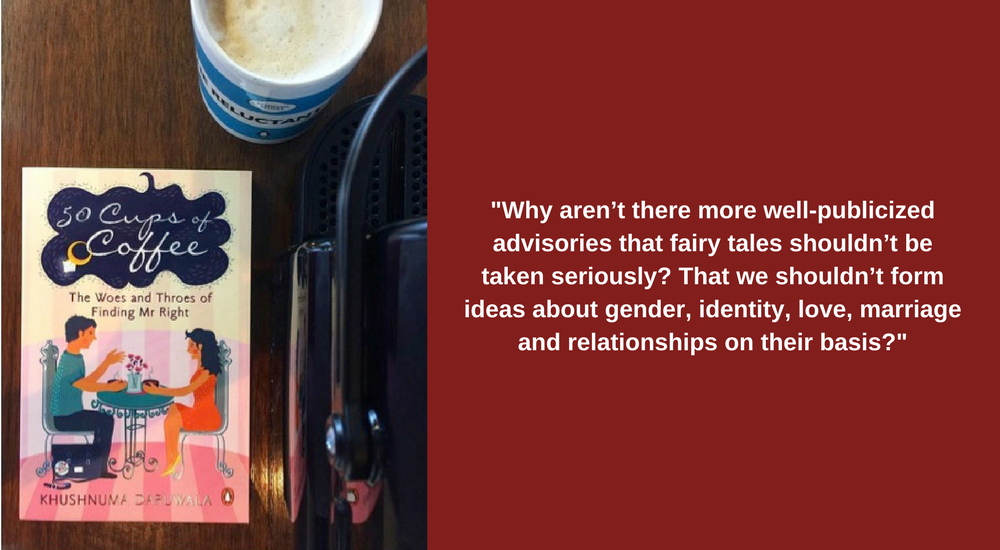 The Frog Prince: An Excerpt From 50 Cups Of Coffee By Khushnuma Daruwala

Khushnuma Daruwala writes a hilarious account of dating in India, specifically online dating, in her book 50 Cups Of Coffee: The Woes and Throes of Finding Mr Right. An excerpt.

Given the cross we bear of being perceived as the estrogen pumped, soppy, mush-filled gender, a Martian would be excused for assuming women wrote some of the fairy tales. Oddly enough, gallant princes, white horses, serendipity, glass slippers, dragon rescues, life-restoring kisses are all creations of the male imagination. I haven’t yet figured out which category the motivations of the Brothers Grimm, Hans Christian Anderson and Charles Perrault fall into.

♥ The rare breed who were ‘emotionally available’ and ‘aware’? [Which explains why the heroes in their stories are extremely unapologetic about their feelings and romance].

♥ Trying to cover up male insecurities by creating ‘superheroes’?

♥ Or simply trying to disparage women, projecting us as ditzy beauties that required rescuing?

Whatever their motivations, these authors have caused irreparable damage to both genders. On one hand, they’ve sent us on a wild goose chase for a gallant man on a white steed who doesn’t exist. And on the other hand, they’ve betrayed their own species, the men, by setting the bar so high no man ever hears the end of it. ‘What do you mean no? It’s just a teensy weensy telephone pole! I heard Jack slithered up beanstalks for a lark and you can’t do it to retrieve my favourite scarf?’

Animation movies and other cinema take off from where fairy tales leave us—love at first sight, lovers who cross seven seas for their lady, or die trying, vanquish dragons, aliens or whoever the enemy. Fairy tales in sophisticated, adult garb.

Despite the rationality that kicks in at eight when you realize Santa is not real, ideas like ‘fairy-tale wedding’, ‘prince charming’ and ‘knight in shining armour’ stay firmly ensconced in adult concepts of love and relationships. No wonder we are secretly aghast when our dates don’t raise their hats or go ‘my lady’ or simply walk on without holding the door open for us.

Sometimes I wonder why there is so much literature on the Electra Complex (aka ‘daddy issues’) but not much on fairy-tale induced disillusionment. Where are the clinical trials? The dissertations? The white papers and symposiums? Why isn’t there an army of academicians investigating this? There’d be no shortage of volunteers for sure.

Those who thought heart disease is a man’s problem couldn’t be more wrong. Weakened by the creamy rich diet of romance and chivalry, our poor female hearts can barely withstand the shocks of reality.

From expecting and wishing for:

♥ The prince who braved the tall trees, bramble and thorns.

♥ When she tells him he will never see Rapunzel again, he leaps from the tower in despair.

♥ The heat was very terrible, but whether it proceeded from the real fire or from the fire of love, he could not tell.

♥ He had a brave heart and he confronted evil Jafar armed only with a sword.

♥ The prince was so happy to have found Cinderella, he asked her to marry him (after just one dance, mind you).

♥ The chimneysweep never took his eyes off her for even a moment.

♥ It touched the tin soldier so much to see her that he almost wept tin tears.

To having to hear:

♥ ‘You better be capable of supporting yourself.’

♥ ‘Well, I wasn’t doing anyone so I thought why not meet you.’

♥ ‘You will have to work after marriage because I can’t afford a Rs 4 million home on my salary.’

. . . it’s a startling, shock-filled journey. Reminds me of the times when poor Tom (of Tom & Jerry fame) gleefully bites into a scrumptious, multi-layered cake with oozing cream, only to be blown up by a rocket concealed inside. Devious, devious rat.

Why aren’t there more well-publicized advisories that fairy tales shouldn’t be taken seriously? That we shouldn’t form ideas about gender, identity, love, marriage and relationships on their basis? On the other hand, I simply can’t get my head around to why women burned bras. How is gorgeous, silky lingerie a sign of female subjugation and not ‘helpless-until rescued Snow-White’? Isn’t a firm bust way better than busted self-pride?

We need more stories that read:

♥ He was not too good, not too bad; he was just about average.

♥ She waited patiently inside the wolf, prepared to rip out of him the minute he attacked the unsuspecting woodcutter.

♥ She was sad when she saw him choose her ugly, conniving step-sister over her but she knew she’d love again. After all, his brother was a much better catch.

♥ She knew better than to wait around. Armed with a degree she got herself a job and bought the white horse she had always dreamt of. She named him Prince. 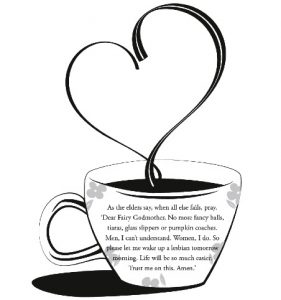 Get your own copy of this hilarious book on dating in India by Khushnuma Daruwala, 50 Cups of Coffee: The Woes and Throes of Finding Mr Right.

A rip-roaring and charming account of dating in India.

Dating is an undeniably daunting task, especially when you are looking for the real deal to settle down with. So when Dia, a 30-something woman, signs up on a dating website for people looking to get married, she realizes just how delightful, vexing, amusing and befuddling looking for the perfect husband can be. Based on her real-life experiences, this book is not a guide to dating, but rather a delightful collection of meeting potential partners, epiphanies about them and soul-searching questions that will make you see relationships without your rose-tinted glasses of love.

Particularly pertinent to this age of online dating, hilarious, honest and witty, this delicious-as-a-cappuccino book is for all those looking for love, in love or in between. With advice as sage (gained the hard way) as that in He’s Just Not That Into You and scenarios as funny and outrageous as those in Sex and the City, 50 Cups of Coffee is the perfect book to curl up with when a suitable bae is not available.

Saudi Arabia Lifts Ban On Women Driving: Too Little To Cheer For?

Even As We Still See Crime And Injustice Towards Women, There Are Distinct Signs Of Change